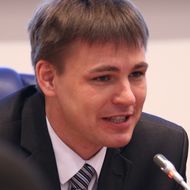 Andrei Tsygankov, Russian and American political scientist, lecturer in Russian and post-Soviet comparative political science and international politics at the University of San Francisco, will deliver a lecture on November, 13. Do not miss!

What motivates Russia in its rivalry with the United States? This talk will focus on Russia’s perception as well as the structure of the international system. The contemporary world is in transition with new rules yet to be established. Russia exploits the relative decline of American power, international uncertainly, and new opportunities presented by the rise of non-Western powers.