The location of the Higher School of Economics’ modern day building complex was in medieval times the Izmailovo estate near Moscow. The estate’s territory was enormous, which indicated the higher status of its owners. In the XVI century Izmailovo belonged to the brother of one of Ivan the Terrible’s wives – Nikita Romanovich Yuriev. Nikita Romanovich’s son, Ivan Nikitich Romanov, owned the estate until 1640, around which time it was placed under royal ownership. Since that time and up until the middle of the XIX century, there was not a single Russian tsar or emperor who did not devote attention to the location.

The manor itself is located on an island more to the northeast of HSE’s present day Izmailovo complex. The only road that used to go from Moscow to the manor extended almost exactly along today’s Izmaylovskoye Shosse. The manor was mostly in use in the spring and summer, when the court left the city. In winter and autumn, it was used for shorter periods of time, mainly for hunting. 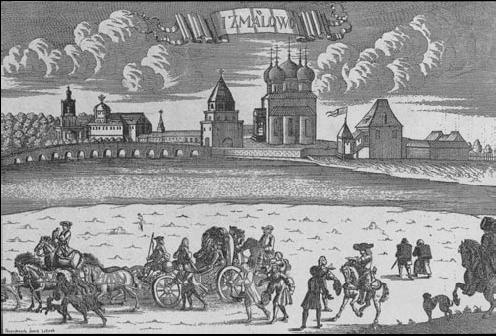 Another toponym of the area is Sokolinaya Gora (Falcon Mountain). The name is directly related to hunting. A vast grove used to be located near the current metro station Semyonovskaya. A falcon yard was built in the grove for the amusement of Tsar Alexei Mikhailovich, who was an avid hunter. Almost all the Romanovs and their royal attendants loved falconry, hound hunting and hunting in general. Historian M. Khmyrov has a description of one of their typical hunting trips: ‘On the set day, at dawn, the hunting horns were already being blown joyously from the yard of the prince-caesar. Dozens of hound hunters, falconers, and falconer assistants, all on mountain horses, grouped together at the gates of the caesar... On the bows of one of the hunters jumped packs of dogs; others...kept elegant Siberian falcons, in velvet rufter-hoods embroidered in gold, silver and silk, with bells on their necks. The prince-caesar, informed that everything is ready, leaves his gates on an Arabian stallion. Throwing a glance on all the hunt, the makeup of which, with guests, sometimes reached up to 500 people, the prince gave the sign. And everyone went behind him to Kolomensky or Izmailovo, surprising those who cross paths with the shine of a train. The convoy stretched in a long tail behind.’

Based on the descriptions of the hunting trips of Peter II from Izmailovo and Alexei Mikhailovich from the Kremlin, one can imagine all the pomp and grandeur of the event.

Izmailovo had an enormous number of bodies of water, both artificial and natural, including many swamps. One of such swamps was called Blagusha, which was surrounded by a grove and is located in the immediate vicinity of HSE’s present day buildings.

Blagushenskaya Grove was under the protection of the court administration for quite some time. This area was previously not part of Moscow. The territory stretching along the road from the village of Semenovski to Izmailovo Park was not built up and kept its fields and gardens. Only at the beginning of the XX century was this part of the former royal road included in the police boundaries of the city, and the location became a full-fledged district of Moscow in just 1917. 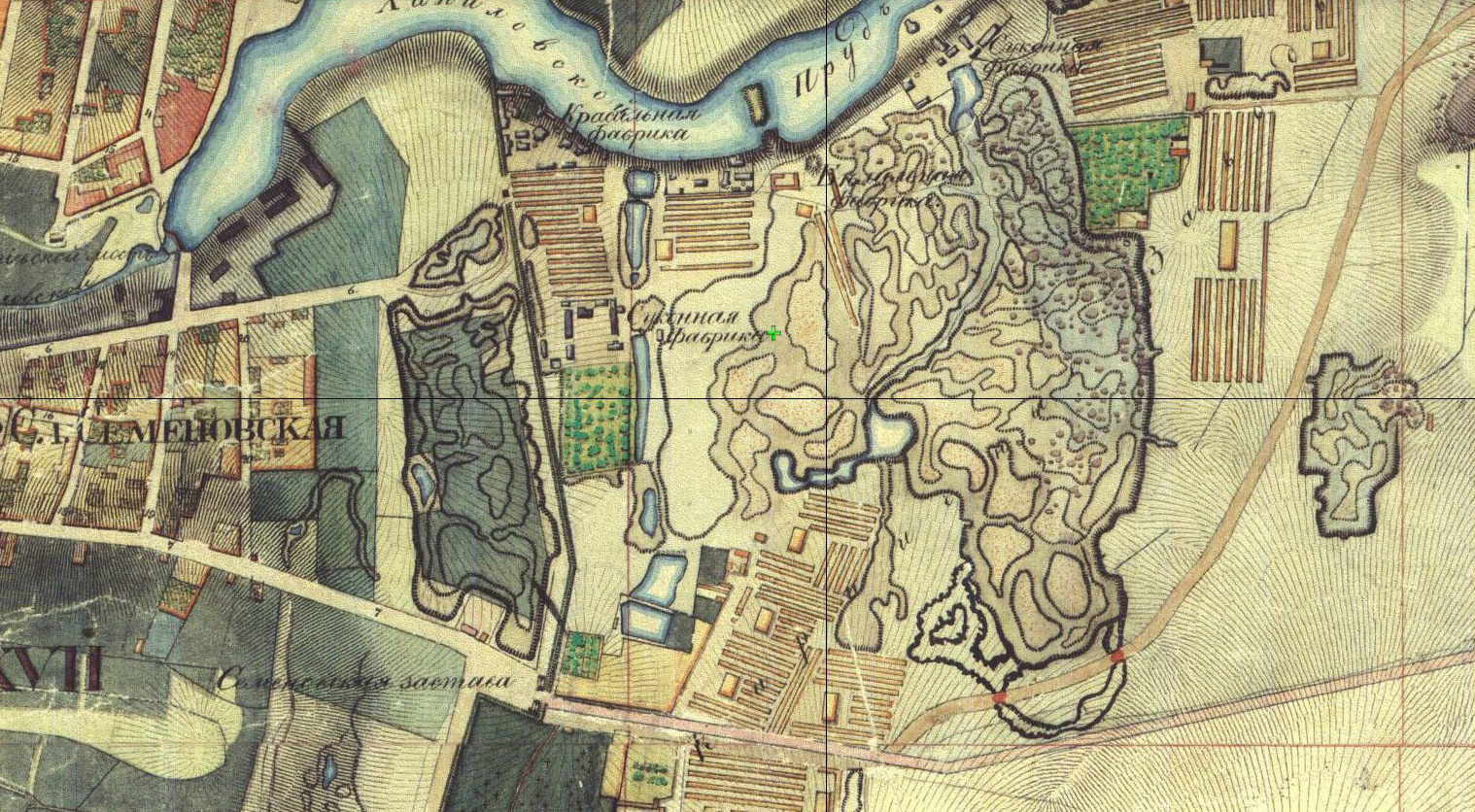 Topographic plan of Moscow. 1838. In the center of the map is Blagusha Swamp. The lower road, running from the west to the east is present-day Izmaylovskoye Shosse. A little to the right of its bend is the Izmailovo Complex of the Higher School of Economics

As the city approached the territory, many factories appeared – factories that mostly produced textiles, brick or tin – as did smaller workshops and clay quarries. Workers lived in barracks and dormitories. The buildings, which were mostly wooden, consisted of one or two floors with no running water or sewerage. At the end of the XIX century the area became a typical working-class suburb. Construction was carried out at random, streets were virtually nonexistent, many water reservoirs were contaminated with industrial waste, and there was no lighting.

A wooden house with carved window casings that stood across the street from HSE’s Izmailovo compleshox also dates back to this time. According to some accounts, revolutionary Pyotr Shcherbakov lived in the workers’ barracks that were located here. He was a member of the Blagusha-Lefortovo Russian Social Democratic Labour Party (B) and created divisions of the Red Guard at enterprises of the Blagushe-Lefortovo district. Shcherbakov died in November 1917 at the age of 30 during fighting on the streets of Moscow. He was buried in the Kremlin Wall Necropolis, and in 1922, the street that lies close to the house was named after him. 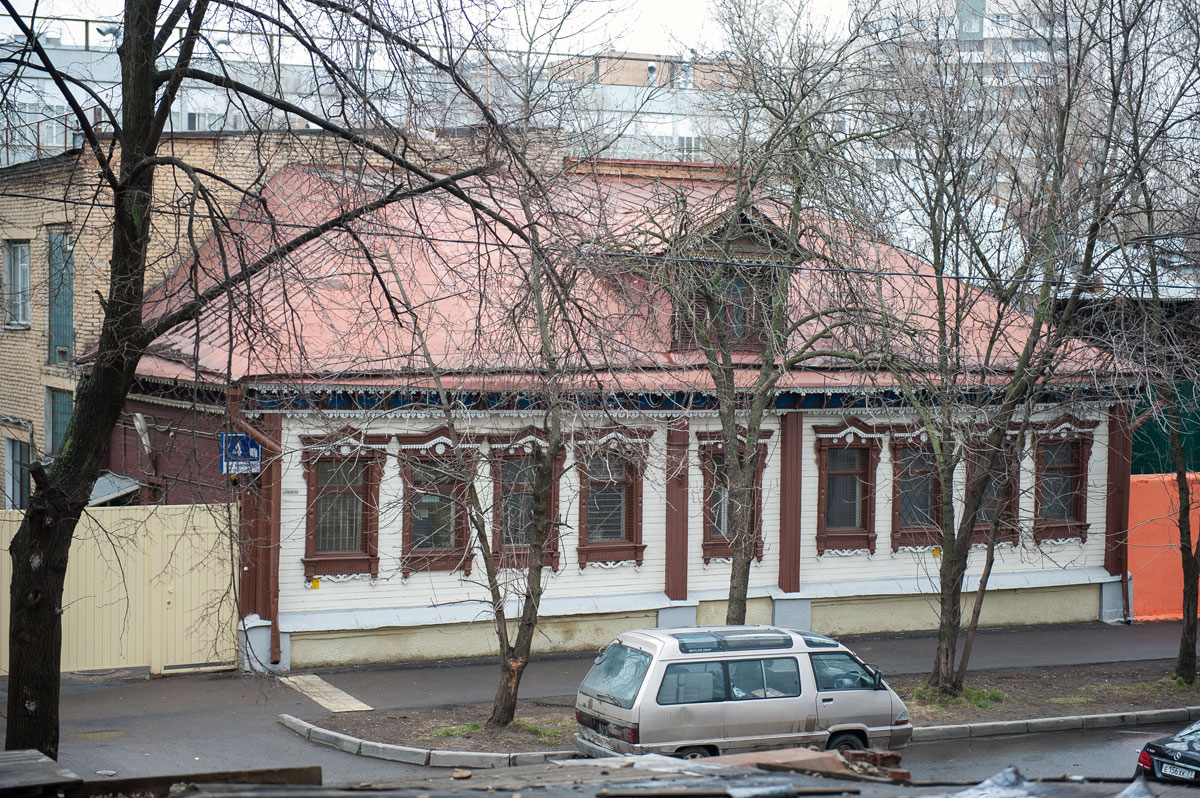 House wherein lived revolutionary P.P. Shcherbakov. View from a building in the Izmailovo Complex of the Higher School of Economics
2014

It was decided in 1897 to build up and bring order to the Blagusha district. The chief of forestry in Izmailovo, Dmitri Ivanovich Mochalsky, was tasked with developing a street plan. He was assisted by Fortunatov (engineer), Mironov (surveyor), Davydov (record keeper), Borisov (foreman) and chief of the Udelnoye Vedomstvo, Velyaminov. The Blagusha district was separated into blocks of perpendicular streets. The main ones ran from the city to the outskirts and were named after great princes: Mikhailovskaya (now Shcherbakovskaya), Alekseyevskaya (Zverinetskaya) and Petrovskaya, which became Kirpichnaya in the Soviet period. And perpendicular to these were streets named after all the planners. Some of them now hold the same name, for example, Velyaminovskaya Street. There is also a Blagusha Street.

In 1931, under the Central Administration of Economic Accounting of Gosplan, it was decided to create Moscow's first mechanized calculation centre. It opened a year later on Kirpichnaya Street. This led to a change in the entire region's status — it became one of the capital’s scientific centers.

In his book, How Machines Compute, M.S. Tukachinsky writes: ‘In Moscow, on Kirpichnaya Street, stands a four-storey building with large windows. At the entrance is the sign: First Moscow Factory of Mechanized Calculation under the management of ‘Soyuzmashuchyot’ of the USSR’s CSD. A factory of calculation! Its raw materials are numbers as the task; its product – numbers as the solution. In addition, this is a real factory with several hundred different machines that perform millions of calculations per day — a plant in which, as at any factory, each new job is preceded by the process of designing and developing technology.’

One of the tasks of the mechanized calculation centre was to process national census data. All information was received in the computing center in the form of paper documents. The further treatment process was divided into three stages: the primary processing of the documents, the preparation of the computer medium — most often these were punch cards — and the actual data processing, as well as verification and formatting. Enormous machines took up entire rooms and carried out all three stages of the process.

The calculation centre’s current address is Izmaylovskoye Shosse, 44, building 2, and it is now one of the Higher School of Economics’ buildings.

The four-storey façade of the building faces Kirpichnaya Street, and the walls are plastered with imitation stone. The lower level has horizontal corbels and is darker in colour. Several vertical flat blades extend along the centre façade.

Its simplicity, and even a certain severity in its design, is compensated for by the rhythm of similar large square windows placed on the end and on the main façades. It is as if the house is made of cubes of windows. It is through these numerous windows that the building is filled with light and air.

From the yard to the rectangular sections of the building, two additional sections were symmetrically built on, both narrower and higher, with small windows. They had a secondary, utility-based purpose. One of the projections also has a metal boiler tube.

The internal arrangement of Moscow’s first mechanized calculation centre fits its productive purpose. It has extensive halls with several rows of square columns. The light in the rooms comes in from three sides, and the ceilings have low wooden beams. Under multiple layers of wallpaper from various points in time, a fragment of the original design of the interfenestrial wall was found coated with a fine-brush picture. The fragment is too small to say with certainty that the centre’s walls were wallpapered, but the idea itself is extremely interesting.

The freight elevator opens directly into the halls, which was necessary for delivering calculation equipment.

The building still has staircases reminiscent of the 1930s. This includes staircase lattices with curving wooden railing, as well as doors exiting to landings and the floor of the staircase landings themselves. An original mosaic of simple geometric shapes made from granite chips and set in a dyed concrete mix also gives the building a 1930s touch. Similar mosaics were widely used in the interiors of 1930s training and factory buildings.

The building is currently under renovation. There are now completely different requirements for educational facilities. 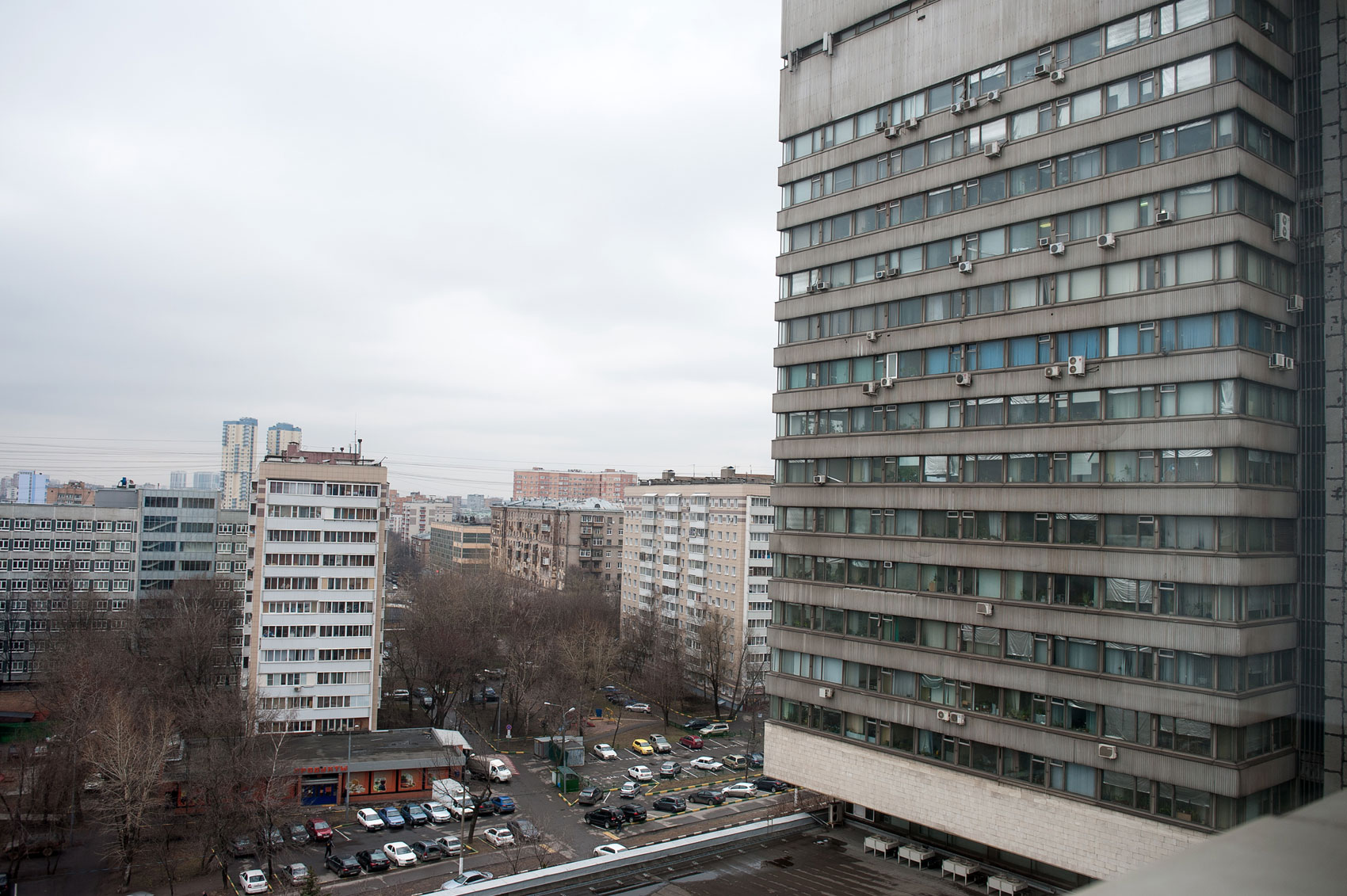 View of Izmaylovskoye Shosse and GMTs Rosstata (on the right) from a window of the top floor of building No. 33 along Kirpichnaya Street
2014

Next to the main building is a smaller auxiliary building of the former centre. This building is also part of HSE's current Izmailovo complex. The current address is 44 Izmaylovskoye Shosse, building 1. This two-storey building has traces of Soviet times. The first floor entrance door is particularly noteworthy.

Moscow’s first mechanized calculation centre was joined with the Central Statistical Administration of the USSR in 1964. Four years later, construction began on a 110-meter high skyscraper of the main calculation centre of the Central Statistical Administration and was completed in 1980. The vertical structure towered over all the buildings on neighboring streets. A single organization was ultimately created – the Main Calculation Centre of the USSR’s Central Statistical Administration – which after many years of transformations was renamed the Prime Interregional Centre of Information Processing and Dissemination' of the Federal State Service for Statistics (GMC of the ROSSTAT) in 2005. At the same time, construction began on another building – No. 33 on Kirmichnaya Street. This comfortable modern building with its spacious halls and offices completed a complex of compactly located Calculation Centre buildings.

Three of the four buildings currently belong to the Higher School of Economics, including two buildings of the former mechanized calculation centre (44 Izmaylovskoye Shosse, buildings 1 and 2) and the new nine-storey building at 33 Kirpichnaya Street.