The four-storey structure, with the main facade overlooking the courtyard, is decorated with pilasters and a gable. This is also a remodelled home, which beginning in 1710 was owned by Prince Yakov Ivanovich Koltsov-Mosalsk, the stolnik and voivode and a representative of the ancient family descended from Rurik.

Testimony recorded in a letter to the Secretary of the British Embassy in Moscow, Christopher Ludwig Veysbord on August 10, 1710, speaks to this period: ‘Six days ago here, during a feast at one Prince Mosalsk, the house collapsed, killing ten or twelve servants and five distinguished persons, including the second son of the old Prince Boris Golitsyn with his wife and a certain Buturlin, head of Zemsky Prikaz. 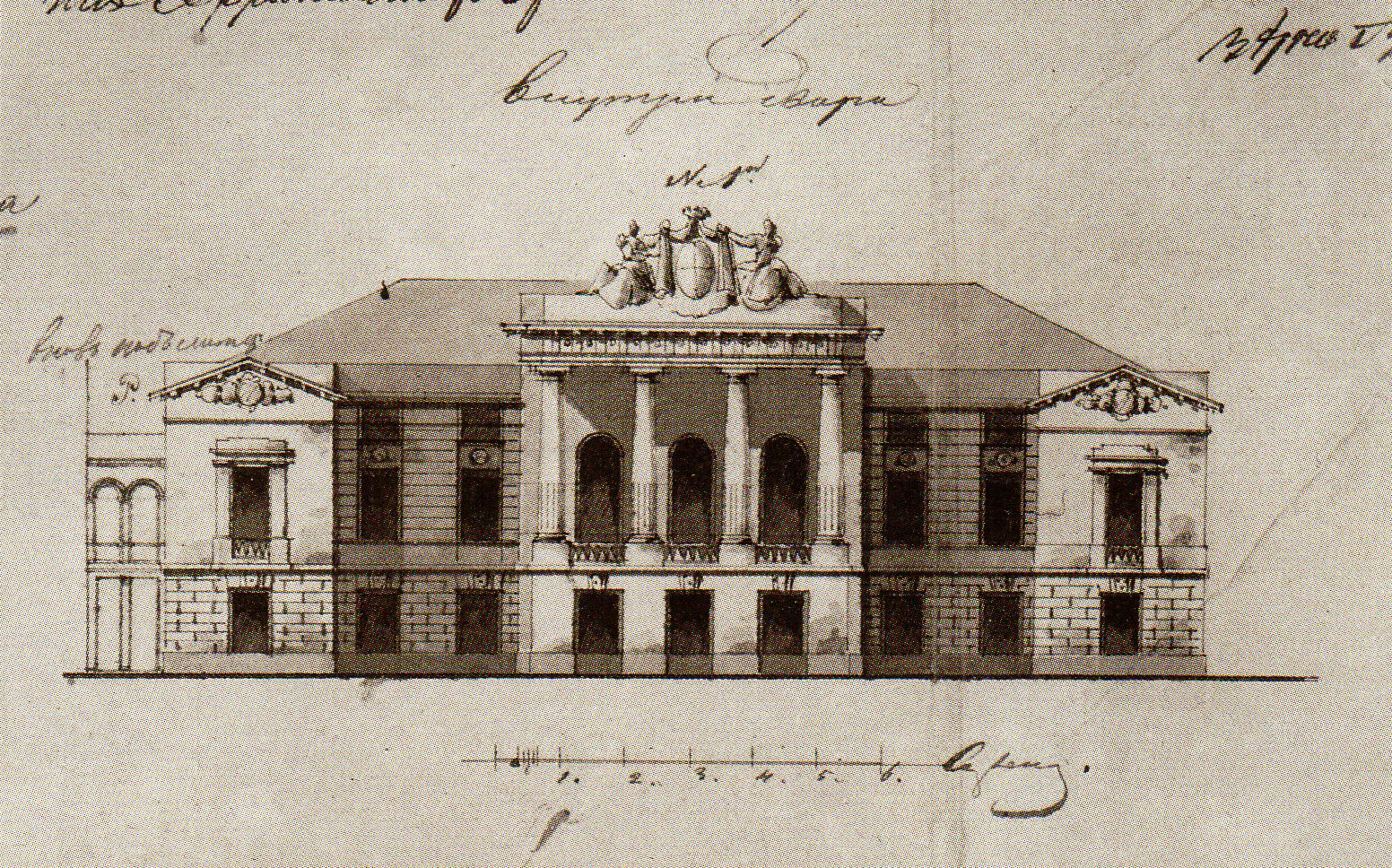 The manor house was located deep in the courtyard, and was rebuilt several times since 1710. The building itself was expanded through the acquisition of small adjacent areas. After the death of the childless Price Yakov Ivanovich in 1728, the house still belonged to his family for more than a hundred years. It was first inherited by his brother Ivan Mikhailovich Koltsov-Mosalsk and then his direct descendants. Its last owner in the family was Princess Lyubov Koltsov-Mosalsk. In 1834, her husband Prince Alexander Andreyevich died. It is obvious that the widow must have needed an assessment of the property she inherited, as a surviving sketch of the house on Myasnitskaya was produced in this year.

In 1845, the descendants of Koltsov-Mosalsk sold the house with the large garden to the Armenian merchant Ivan Stepanovich Ananov.

Ovanes Ananyan (Ivan Stepanovich Ananov) was a representative of Moscow’s sizeable Armenian community. Long present in Moscow, Armenian merchants left a notable mark on the city’s life through charity work, founding educational institutions and building churches. Ananov was no exception: he invested his money and was a member of the counsels at the Lazarev Institute of Oriental Languages, several shelters, Armenian churches, St. Katherine’s Hospital, the Moscow Art Society and even the Zoo. In addition, Ananov was a source of private banking in Russia. In 1866, he co-founded the Merchant Bank, the first private bank in Moscow. Since 1871, he was a member of the board of the Bank of Industry and then inspector at the Moscow Business Association and delegate of the Moscow Exchange Society. He received one of his most prestigious appointments in 1881 when he became the treasurer of the Committee for the Construction of the Monument to Alexander II in the Kremlin. For his efforts, Ananov was awarded several medals and the rank of privy councillor. 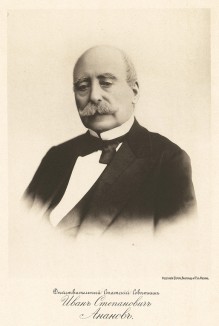 Ivan Stepanovich owned several mansions and apartment houses in Moscow. He lived on Myasnitskaya until his death in 1888 when he left a large amount of money and possessions to his ten children, half of whom were born in this house, as well as to other relatives.

By this time, the property comprised the main house, still standing in the courtyard, and several individual structures on the street’s building line, which were leased to various stores and shops. The heirs decided to construct a residential building on the street with an office and warehouse space. In the 1890s and 1900s, the architect Alexander Vasilyevich Ivanov built a new three-storey building.

Little remains from the original interior. The house has an extensive system of cellars on different levels, which have largely remained intact and provide an impression of the original decor. The cellar area, which currently features a dining room and snack bar, is marked by high ceilings with cross vaults that are supported by rectangular pillars in the corners.

In another part of the house, the ceilings of the cellar have a completely different design: dome-shaped moulded flower heads are arranged in rectangular caissons of different sizes. The ceiling is framed by a cornice with an ornamental frieze and decorative brackets. Obviously, these rooms were intended for expensive shops or the offices of prestigious firms rather than for storage needs.

The house was heated by stove, which was located in the lower cellar. Heat was transferred through a complex system of ducts throughout the house. In one of the cellars, an element of the stove is preserved, and on some walls, dampers from the early 20th century can still be found.

The central part of the building features staircases leading from the cellars. Originally, two staircases diverged symmetrically in different directions. Half of the second set of stairs is now hidden; this section is located behind a door on the ground level cellars. The whole space of this room is occupied by a staircase that leads nowhere. As the only staircase of its kind, it is a unique monument. 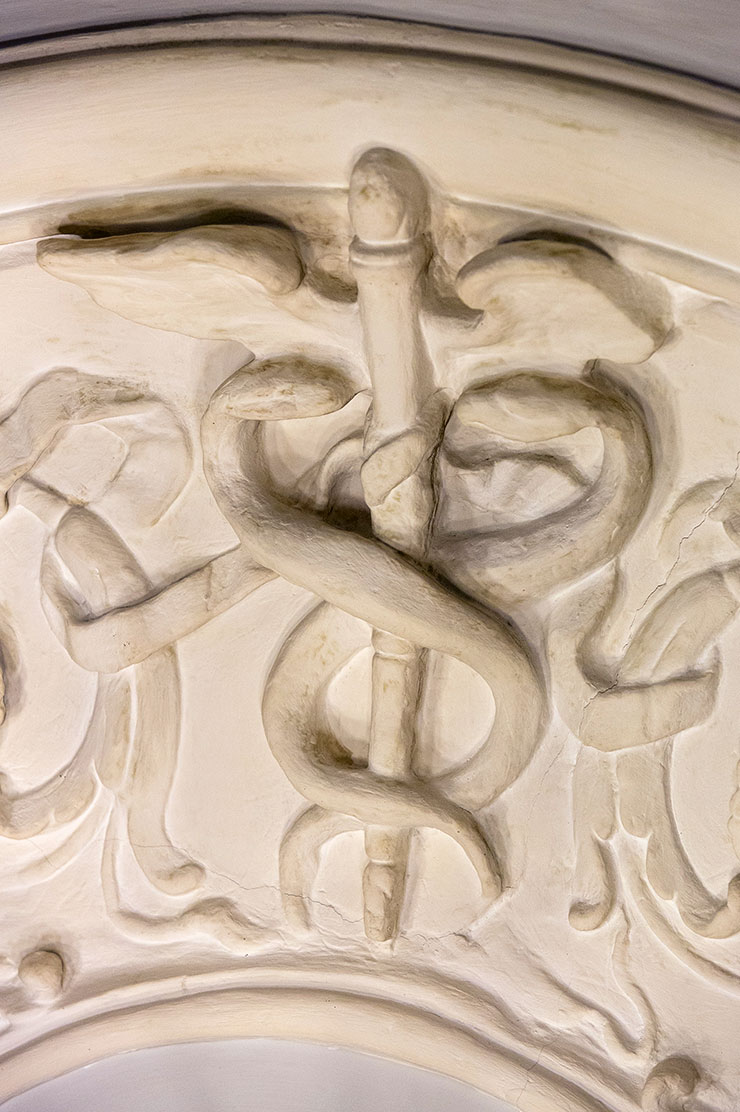 Caduceus on the moulded décor of the rosette in the first-floor hall.
Photograph 2014.

The central hall of the first floor always attracts attention with the floor mosaic made of simple geometrically shaped tiles, the central part of which features a Muir & Mirrielees logo. This mosaic’s appearance here is not as obvious as it seems at first glance, however, as 20 Myasnitskaya Ulitsa was never a point of sale for the Muir & Mirrielees company. The company never even leased warehouse space in the building. The firm’s connection with this building is completely different – primarily with the company’s tile-manufacturing activities. Its tiles can be found in buildings around Moscow, and the perfectly preserved mosaics in Number 20 serve as a unique and rare example of the company’s broad range of activity that has been passed down to our time.

Having built a new home on Myasnitskaya, the heirs of Ananov leased it to the Varvarinskoye Company, which was founded in 1897 by three wealthy Muscovites – A.I. Shamshiny, A.D. Schlesinger and S.V. Lepeshkin. The company had considerable resources that were used to build luxurious residential buildings outfitted with all the most modern technical innovations. Number 20 was among the buildings the company constructed, and it is quite likely that it ordered tiles from Muir & Mirrielees.

The Offices of Bari and Shukhov

The offices of Alexander Bari moved into the new building. Trained as an engineer, Bari chose to purse entrepreneurial goals, and in 1880, he opened a company that would become famous in Russia and abroad. The range of its projects was unbelievably wide and included everything from manufacturing metal parts for stoves to constructing bridges and buildings. 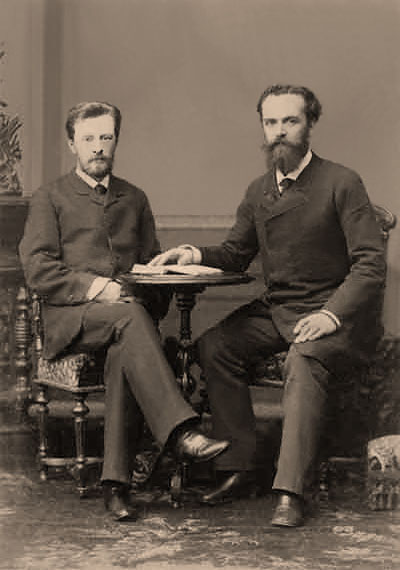 Bari’s success was not only commercial in nature; he was also skilled in hiring exceptional staff. He invited the best engineers to work for him, including Vladimir Grigorievich Shukhov, whom he had met in America while building pavilions for the Centennial Exposition in 1876. After Shukhov joined as the firm as chief architect, the two continued to work together for 30 years.

Bari died suddenly in 1913, leaving his son to manage the company. When the company and the building were nationalized in 1918, the family was forced to emigrate, but Shukhov remained, working in the same building.

During the Soviet Era

In the mid-1920s, the building was transferred to the Soviet Oil Syndicate, which oversaw significant changes. The architect Ivan Rerberg built two additional floors over the three-storey building, giving it the appearance that exists today. The architect’s respect for the existing building allowed for an optimal union of the new floors with the architecture of 1900 without violating the integrity of the composition.

Buildings in the courtyard were also constructed at this time, and the building became a unified complex. The former home of Koltsov-Mosalsk had completely changed, with the column portico destroyed and replaced with pilasters. A gable with a Soviet emblem also appeared on the building.

During World War II, a bomb fell across the street where the Church of St. Euplius once stood, but Number 20 itself was not damaged.

After the war, the building was transferred to the Soviet Ministry of the Chemical Industry, which was established in 1946. The doors on the second floor in front of the elevators and the wood panels in the meeting room remain from this era. The building was also equipped with an air-raid shelter, which was located under the library. Since 1997, it has been listed as an architectural monument, including the chambers from the early 18th century, the residential building of the late 19th century and early 20th century, and the reconstruction completed in the 1920s.