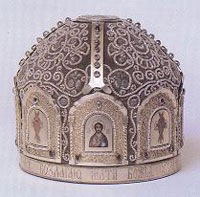 Building No. 12 stands on the site of five holdings, which began from the corner of Stremyanny Pereulok and stretched along the street. They consisted of one-storey wooden houses, stone outbuildings and a butcher shop. For a long time the corner section was owned by Zarubina, and its last owner up until 1925 was Maria Matveevna, who was married to Ikonnikov. Vasily Lysizin, a gunsmith from Tula, lived in the next holding down the street in the middle of the 19th century, and before the revolution, it was the Kashirskian townsman, Pyotr Antonovich Ivanov.

Even further down the street were the Olovyanishnikov holdings. Here, at Malya Dvoryanskaya (presently Malaya Pionerskaya) they had three holdings, consisting of small wooden houses, until the middle of the 19th century. The Olovyanishnikovs were an ancient merchant family who traced their origins to Yaroslavl, where in 1736 they owned a bell plant – one of the largest and most well-known manufacturers in Russia. In 1848, the Olovyanishnikovs opened another factory to produce church vessels in Moscow on Malaya Dvoryanskaya Ulitsa. At the end of the century, their owner was Ivan Porfirievich Olovyanishnikov. He had many sons, and the family formed an association on equal footing. After the death of Ivan Porfirievich in 1898, the association’s management at various times included Ivan Ivanovich, Porfiry Ivanovich, Vladimir Ivanovich, Victor Ivanovich, Georgy Ivanovich, and Nikolai Ivanovich. Their mother Eupraxia Grigorievna, was chosen as chair of the association’s board. The holding on Malaya Dvoryanskaya officially belonged to her and the association. 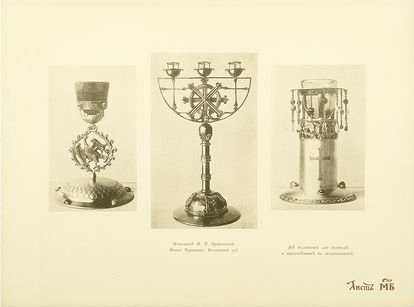 At the beginning of the 20th century, the Olovyanishnikovs’ company was the second largest enterprise in Moscow producing church vessels. Their advertising read ‘Supplier of the Court of His Imperial Majesty.’ The Olovyanishnikovs made artworks of all styles – from the first centuries of Christianity to the 20th century. They created work in gold, silver, bronze, iron and other metals. Wood and marble with artistic carvings were also in their arsenal. The factory produced all articles of any size and from almost any material that might be needed for church use.

The Olovyanishnikovs were constantly searching for craftsmen, especially artists. They held a competition among students of the Stroganov Academy, where the work of Sergei Ivanovich Vashkov drew special attention. Even before graduation, the young artist, a follower of V.M. Vasnetsov, became head of the art division at the Olovyanishnikovs’ factory. Thanks to his talent, the early 20th century was a period of prosperity for the factory. The products manufactured here reached the highest levels of artistry, which was valued by many famous customers: Empress Alexandra Feodorovna, Grand Duchess Maria Pavlovna, Bulgarian king Ferdinand, metropolitans, patriarchs, and others.

Alas, the factory did not have enough space. In 1912, Olovyanishnikovs petitioned to build a new brick building on three holdings. Leonid Stezhensky, who had built a number of churches and ecclesiastical communities, was invited to be the architect. The Olovyanishnikovs’ new factory, a four-story structure that is now part of the building No. 12, was built in 1915. This was only part of what he had planned, and he did not succeed in building the rest.

The building’s façade was designed quite simply: interfenestral vertical blades with small decorative elements at the top and graceful arcs above the windows. On the first and last floor, they are weighted with an imitation capstone.

The internal divisions of the building are incredibly complex, however. Not everything can be broken down by time period, but most of the intricate stairways and corridors come from 1915. In the building’s courtyard, there is a remarkable building that is related to the Olovyanishnikovs’ holding and that is currently used by the HSE as a utility room. Although it has fallen into strong disrepair, it retains remnants of its brick decor.

Inside, the space is divided by powerful pillars and a vaulted ceiling that was widely used in late 19th and early 20 century buildings. This design was conceived and implemented by the French gardener Joseph Monier. It consists of parallel arched concrete vaults through which reinforcement bars pass.

In 1918, all such factories were closed and nationalized, and the Olovyanishnikovs’ factory also ceased to exist.

The factories on Malaya Pionerskaya

In 1922, the factory that once produced church vessels was occupied by an organization created by the revolutionary Nikolai Podvoisky to prepare young people for conscription. Sport was the main priority, with the organization even serving as a football club; it also built sports facilities and manufactured sports equipment manufacturer. One such factory was located in the building on Malaya Pionerskaya.

In 1926, this organization was disbanded and the Geodesia Optical Mechanics Factory moved in. The history of manufacturing survey instruments in Russia began in 1811 when workshops were set up in St. Petersburg at the Military Topographical Depot. After the revolution, they were transferred to Tashkent, and later to Moscow, where they became a full-fledged factory.

In 1934, the first Soviet model camera Leica was manufactured on Malaya Pionerskaya, which was to be called the Geodesia Camera. After a favourable review by the magazine Soviet Photo, serial production of the camera began. 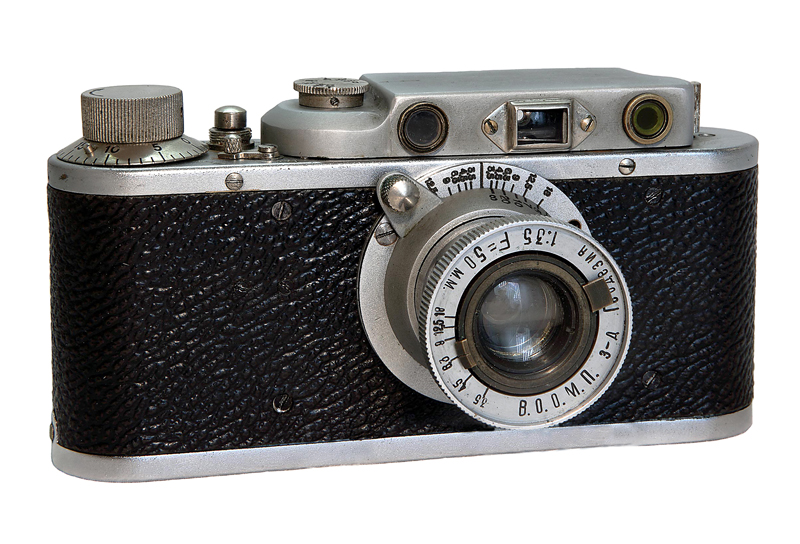 Also in 1934, the section from the intersection with Stremyanny Pereulok to the Olovyanishnikovs’ factory building was cleared, and the erection of Building No. 12 began. Construction was completed on February 1, 1938.

The centre of the composition is a rounded corner located at the junction of two streets – Malaya Pionerskaya and Stremyanny Pereulok. It rises above the main level on the two floors, turning into something resembling castle towers. From the corner of two streets, wings diverge symmetrically. Along Malaya Pionerskaya the wing of the building joins with the building of the Olovyanishnikovs’ former factory.

The design of the façades is even more restrained than that of the former factory. The corner part is decorated with vertical blades. Along the entire height, there are significantly more pairs of windows on the rounded façade than the others have, and they have an almost square shape. Despite the parsimony of the décor, this corner of eight floors, binding two streets together, is the most remarkable part of the building and a dominating feature on several streets.

The interior of the building changed with each change in ownership, just as the additions in the courtyard. The passage to the inside structures most likely comes from the later owners. It, too, was built piece by piece, as evidenced by the brick frieze above the first level.

Many changes from different eras can be traced on the courtyard façades, sometimes overlapping and sometimes nearly lost or only partially preserved.

As a result of numerous reconstructions and further constructions, the plans of each floor in the building are all different from one another. Certain parts of the building can only be reached by certain stairways, as is the case with some of the floors. It is not surprising therefore that there is a myth of a women's prison once existing in these labyrinths.

In 1940, the Geodesia Optical Mechanics Factory was renamed the Union State Plant No. 356 of the 2nd Main Directorate of the People's Commissariat of Arms of the USSR, after which it took on a defence role. It is possible that a tower was built over the building at this time, which was characteristic for prison facilities but also required for such enterprises. There is another version of the story that the tower was built as a specialized laboratory that required a lot of light. 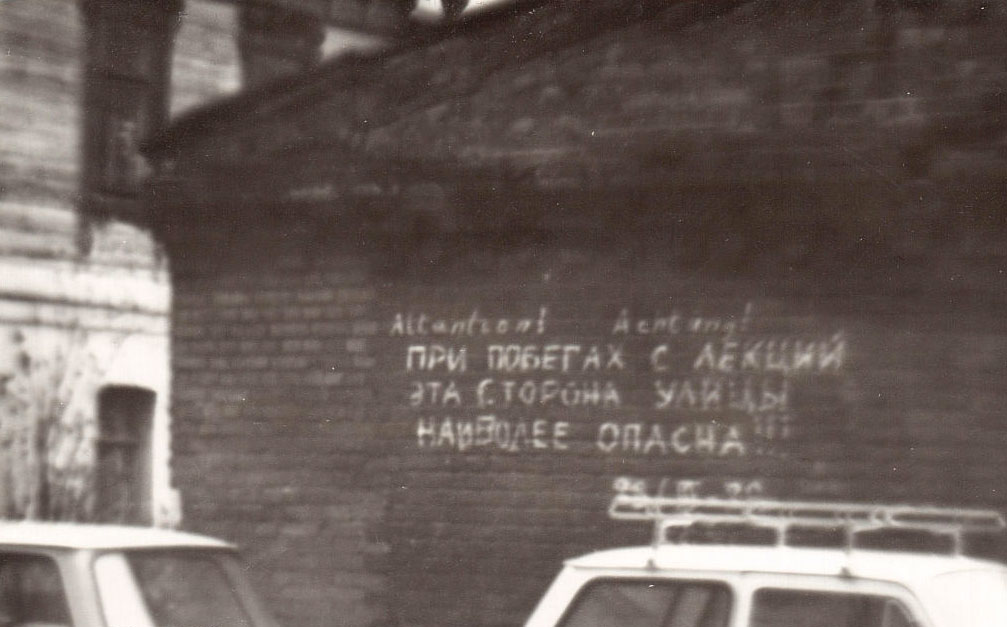 Inscription on the wall of the building on the opposite side of the Malaya Pionerskaya Ulitsa (now defunct): ‘Attention! Attention! When running away from the lecture, this side of the street is the most dangerous!!!’
Photograph, 1975-1978, Oldmos.ru

With the onset of the Great Patriotic War in August 1941, Plant No. 356 was evacuated to Sverdlovsk. Immediately after that, the building on Malaya Pionerskaya was transferred to another plant, No. 398, which produced ammunition, specifically, fuse tubes for shells. This was yet another owner who could build on the tower over this strategically important site.

The Moscow ammunition factory was under the jurisdiction of the People's Commissariat of Munitions of the USSR, which at the time was headed by Boris Vannikov, one of the founders of the Soviet nuclear project. It was also under the jurisdiction of a new institute designed to train specialists capable of developing new types of technology, including for the nuclear industry. The institute was established on the basis of ammunition factory No. 398 and was called the Moscow Mechanical Institute of Munitions, and later the Moscow Mechanical Institute. After the war, in 1953, it was again renamed, this time as the Moscow Engineering Physics Institute. The Moscow Mechanical Institute of Munitions had three faculties: design, fuse tube and technology. The main building of the new institute was No. 21 on Myasnitskaya Ulitsa, with the building on Malaya Pionerskaya being transferred to the institute in 1944. 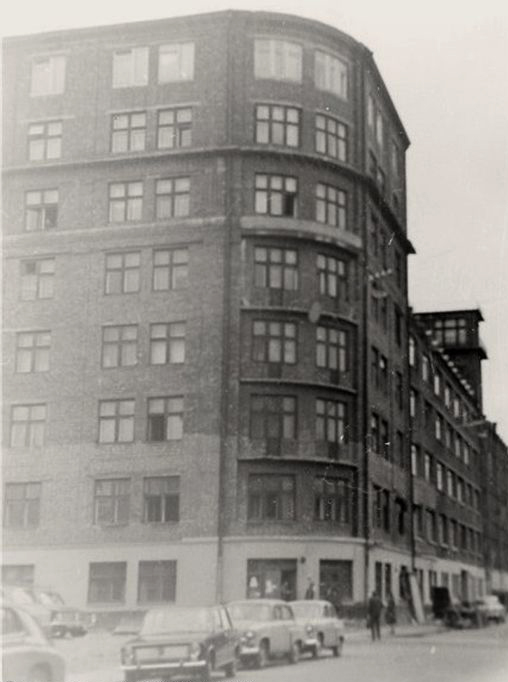 Building of the Moscow State Institute of Electronics and Mathematics. View from Stremyanny Pereulok
Photograph, 1975-1985. Oldmos.ru

Most likely, the time of the Moscow Engineering Physics Institute oversaw the addition of a small half-storey above the right side of the new building. This light space with its characteristic sloping ceiling further complicates the already intricate corridors and passages of the building. The 1940s and 1950s saw the design of the classrooms in the new part of the building and the walls made of glass blocks in the corridors.

Many lives are intertwined in this building, and there were many ups and downs, discoveries and artistic successes. However, the history of the building is not over yet. It is waiting to be explored further.

Many thanks to A.A. Frolov, a specialist on the history of Moscow, for assistance in determining the time of construction and architect of Building No. 12 on Malaya Pionerskaya Ulitsa.

The building has been managed by the Higher School of Economics since 2012. The following are located here: