This new column ‘HSE. Basis’ is about the history of the buildings the university occupies today. The first article is about number 8 Pokrovsky Boulevard which at various times has been a famous girl’s gymnasium, the apartment of the animalist painter Stepanov, and the editorial offices of the Great Soviet Encyclopedia. 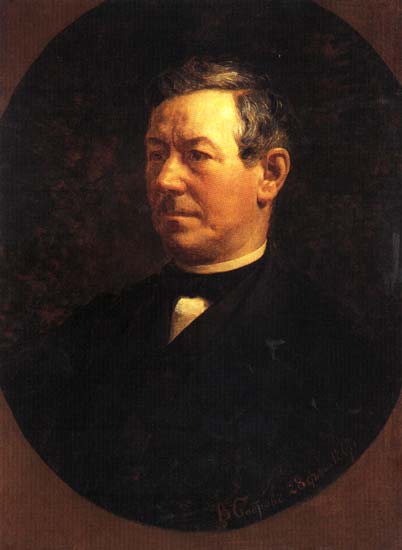 The houses on this part of Pokrovsky Boulevard appeared on the Moscow map in the second half of the 19th century. The Boulevard was first created in the 1820s along the line of the walls of Bely Gorod. The new land opened up for development when the ancient white fortifications were dismantled by Catherine the Great was scooped up by Moscow’s merchants but the lots where numbers 6 to 8 now stand stayed empty for along while.

In the second half of the 19th century a large part of the land at the top of the Boulevard was bought by hereditary freeman of the city and member of the 1st merchant’s guild, Vassily Alexeevich Medyntsev. V. & P. Medyntsev Brothers and Co. traded in silk and brocade fabrics. The Medyntsev brothers owned gold-cloth and textile factories in Vyshny Volochyok (Tver oblast) and apartment buildings in Moscow. All the brothers were on friendly terms with another merchant family - the Tretyakovs, they enjoyed music, theatre and literature and were patrons of the arts. Vassily Medyntsev helped the artist Viktor Bobrov who painted this famous portrait.

In 1878 Medyntsev built what is now number 6 Pokrovsky Boulevard designed by the architect Dmitri I. Pevnitsky. Number 8 was built in 1881, the year Medyntsev died. It was a three-storey mansion with six windows which now forms the right hand side of the current building. The facades were eclectic with classical elements. The left-hand side of the building had an entrance into the inner courtyard. The building was completed by the subsequent owner, Vassily’s son, Nikolai Medyntsev. The new building was conceived to be apartments and an educational establishment.

In 1894 a new extension designed by the architect Flegont F. Voskresensky was added on the left hand side of the building and the two buildings became one with an entrance in the middle. With a few minor changes, the building has survived to this day.

Voskresensky is famous in Moscow for his brilliant buildings in the art nouveau style, but on the Boulevard he was presented with a different challenge - to create a building that would blend in organically with the existing structure, combining the old and the new parts with a single decorative solution.

At first glance the building looks symmetrical but slight deviations in the design avoid the facade becoming monotonous and make the building elegant and remarkable. Even in the courtyard the asymmetrical theme echos in the brickwork frieze at the top of the walls.

The older part of the building has kept some of its finery in the entrance way, most notably in the tousled atlantes or rather satyrs with comical bellies. Their expressive plaster cast figures flow into the plant designs in the plaster work on the ceiling.

Another notable part of the interior is the Roman mosaic floor at the bottom of the staircase. Its sharply defined look fits beautifully with the grand but slightly grotesque style of the entrance.

Some of the original plasterwork is still visible on the main staircase.

The entrance on the later, left-hand side of the building is more austere but it has a remarkable, decorative cast iron stair rail. The energetically outlined twists of different sizes form a clear pattern up the entire flight. The monogrammed letter ‘M’ for Medyntsev is at the centre of the design and appears with variations on the different floors.

As soon as the new building was completed in 1881, before it was altered by F. F. Voskresensky, tenants moved into the apartments and Olga Vinogradskaya’s gymnasium for girls began its long life here.

The Vinogradskaya Gymnasium for Girls 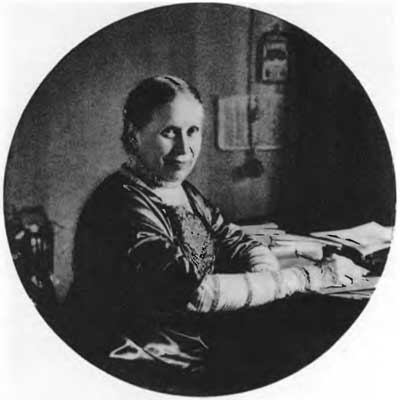 Olga Afinogenovna Vinogradskaya devoted her entire life to the education of women in Russia. Born in St Petersburg in 1853, she was educated in Moscow and trained to be a teacher. In the 1880s she became the head of a school for orphaned girls from Bulgaria and Serbia which joined forces with the boarding house of Madame Kerkoff. In 1883 together with Kerkoff, Vinogradskaya moved into the new Medyntsev building on Pokrovsky Boulevard where she opened her own gymnasium for girls. As well as running the school, Vinogradskaya taught Russian language and literature until her death in 1914.

At first, Vinogradskaya’s establishment was called a school for girls but in 1902 it was given gymnasium status and became one of the most famous in Moscow. Some of its teachers were well-known figures and professors like the historians Alexander Kizevetter and Matvei Lyubavski, the psychologist and philosopher Pavel Blonsky, the physicist Mikhail Konovalov and Ulrich Avranek who taught music there before he became a famous opera chorus master.

The gymnasium became so popular, the space in Medyntsev’s house was no longer big enough and in 1910 the Medyntsev’s built what is now number 8, building 1A, Pokrovsky Boulevard especially to accommodate the school. It was designed by the architect Zverev and the two buildings were joined by a bridge on the second floor which is currently out of use.

From 1911 - 1915 the daughter of Alexei Stepanov, an artist of the Peredvizhniki (wanderers) movement, studied in the new gymnasium building. Her mother, Ludmilla, was a daughter of the Medyntsev family. 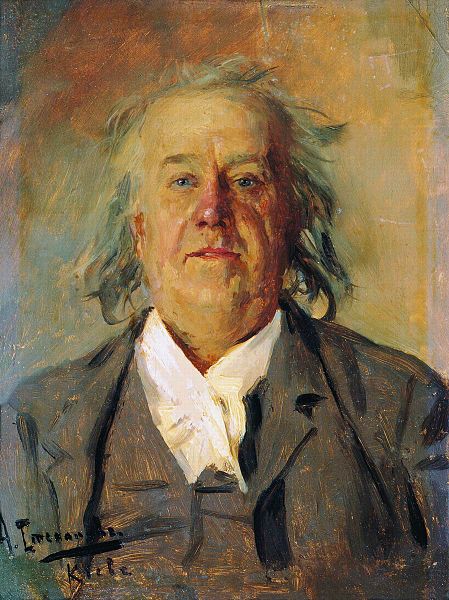 Portrait of Nikolai Medyntsev by the husband of his youngest daughter, Alexei Stepanov
1902, the painting is in the Tver oblast picture gallery

Nikolai Vassilievich Medyntsev, owner of the building, was married to Alexandra Yermakova the daughter of an industrialist who spent the end of his days doing exclusively charitable work. The Medyntsev has only one son, Nikolai and five daughters - Maria, Alexandra, Margarita, Anna and Ludmilla.

Nikolai himself, like his father, was a successful merchant and a collector of Russian paintings and he supported many artists. In 1894 he went travelling with his family to Germany, Switzerland, France and Northern Italy. Nikolai invited the artist Alexei Stepanov, a graduate of the Moscow school of painting and sculpture to go along with them. A year later Stepanov married Ludmilla and the young couple moved into an apartment in 8 Pokrovsky Boulevard.

Stepanov, like his fellow artist and life-long friend Levitan, is considered a master of Russian lyrical landscape painting. In 1899 he was leader of the so called “animal class” at the Moscow school of painting and sculpture. Many famous artists including Serov and Nesterov rated Stepanov’s talent as an animalist very highly.

Description of Stepanov’s studio by Vladimir Gilyarsky in ‘Young Artists’:

“...A. S. Stepanov’s studio at the School of Painting was in an annex on the right of the gate on Yushkov Lane. A huge, oddly-shaped room, it was cold and smokey from the stove. In the middle of the room some animal or other sat on the dunnage - a goat, sheep, dog, cockerel...or, a fox! Nimble, with merry eyes, it would sit there, looking around; then it wanted to lie down but a student tearing himself away from the easel pokes its leg or head with a rod, coaxing threateningly, and foxy sits back in its original pose. All around the students paint her and Stepanov goes among them, commenting and showing them how to do it.

Stepanov’s students were remarkably quiet and modest as he himself was. And it seemed as though foxy sat, quietly and submissively, calmed by their ten peaceful eyes and obedient, almost consciously obedient, under their influence…” 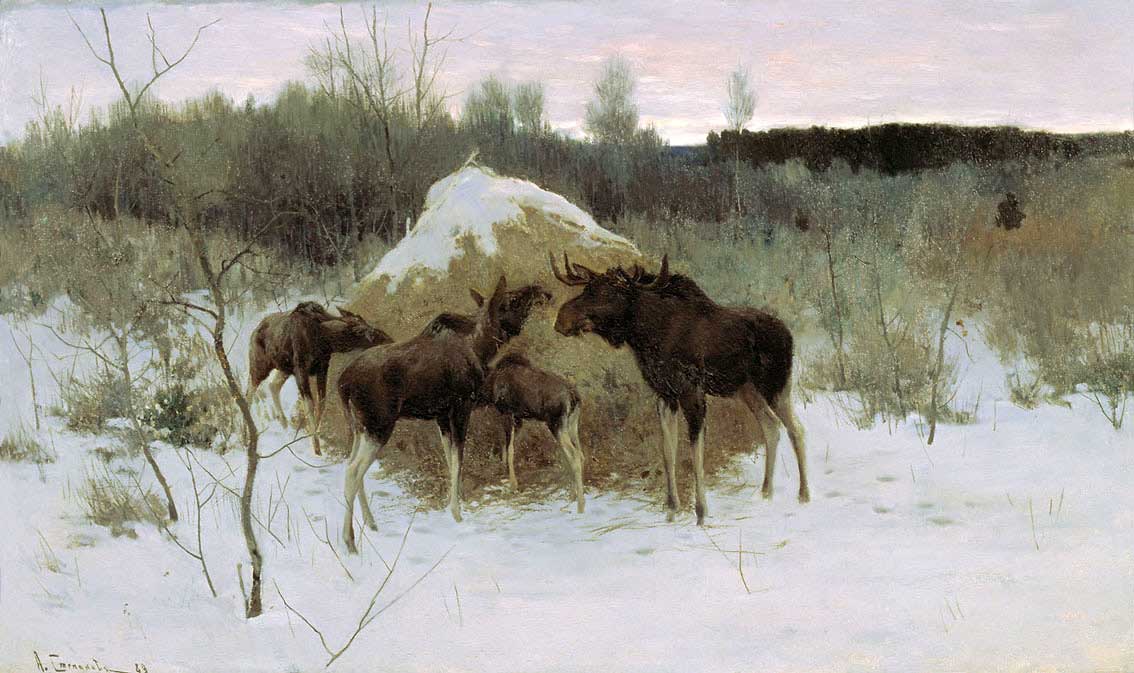 Stepanov made his debut in the Peredvizhniki exhibition with ‘Elk’
1889, Tretyakov Gallery

After the revolution what had been the Medyntsev house remained an apartment building until the middle of the 20th century. There were more than twenty apartments with extremely varied inhabitants. Factory workers lived alongside academic researchers, the conductor from the Buff theatre and until 1926 the owner of a bakery, Vassily Pulfer were neighbours. One of the founders of Soviet cytochemistry Grigory Roskin who researched biotherapy for cancer lived here until the 1930s. His neighbours were the Broides - father and son. Mikhail (Mendel) Danilovich Broide was a merchant of the 1st guild who owned a house on the corner of Zabelin and Starosadskaya Street not far from Pokrovsky Boulevard. His son, Lev Mihailovich studied medicine at Moscow University and went to work as a researcher in the medical chemistry laboratory at MSU. He fought in the Civil war and afterwards became a research fellow in the biochemistry department. The Broides moved to number 8 Pokrovsky Boulevard after their own house was requisitioned and lived there until the 1930s when Mikhail Danilovich was exiled to Syktyvkar and Lev Mikhailovich was sent to work in Kazan University.

Elizaveta G. Worledge, concertmistress at the Stanislavsky State Opera studio lived on the upper floor. Stanislavsky rated her musical work on the opera Evgeny Onegin very highly. Worledge was obliged to become a teacher in 1928 and had to move away from the house.

From 1945 both buildings were occupied by the Ministry of Taste Manufacturing which three years later was renamed the Ministry of Food Production and moved to another location. The buildings then housed the publishing and central editorial offices of the Great Soviet Encyclopedia. In 2004 what had become the Great Russian Encyclopedia was in the old gymnasium building and the Medyntsev’s building was once again residential.

The current owners are conserving Medyntsev’s heritage, maintaining the facade and interior in good condition. The building was sorely neglected when they took over but they have restored it with great care repairing its original features wherever possible.

The HSE has been renting the building since 2011.