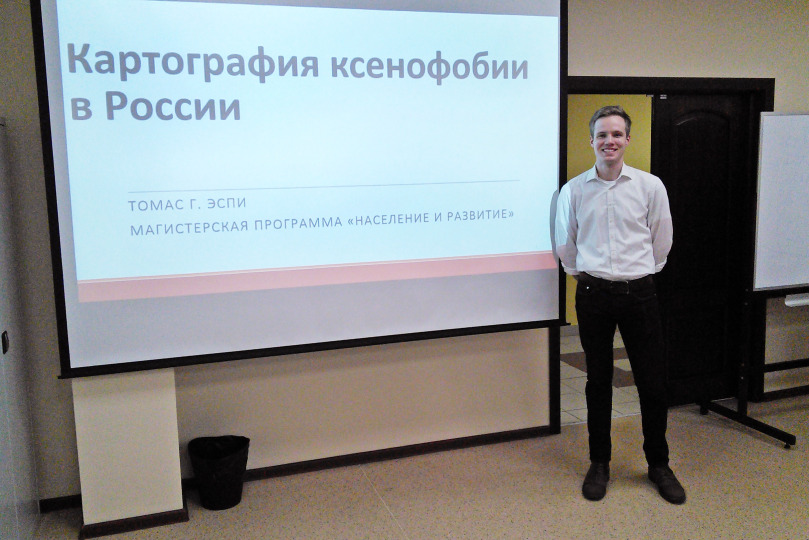 On January 29, Thomas Espy, a student in the Population and Development Master’s programme at HSE, presented a report entitled ‘Mapping Xenophobia in Russia’. During his presentation, he highlighted his paper’s linear analysis of xenophobic attacks in the Russian Federation and a network analysis focusing on nationalist groups, as well as recommended areas of focus for Russian policymakers.

Although his first attempt to learn Russian as a teenager failed, Thomas, originally from Alabama, has long been drawn by Russian language and culture. He eventually learned the language and acquired experience living and studying in Russia. While completing his undergraduate studies at the University of Pittsburgh, he decided to embark on a research career in Moscow, a decision which led him to enrol in the Master’s programme in Population and Development at HSE.

He agreed to speak with the HSE news service about his recent presentation, his research interests and how he finds life in Russia.

— How did you choose the topic of your presentation, ‘Mapping Xenophobia in Russia’?

— I began studying xenophobia in Russia around September 2012 when I started on my Bachelor's thesis. By the end of the project, I felt I had discovered a new academic passion. I returned to this topic in spring 2014, when I attempted to do a series of quantitative analyses on some data from the SOVA Center for Information and Analyses, the Moscow-based NGO that hosted me during my summer 2014 internship.

I was dissatisfied with the quality of my research, so I decided to delve deeper by gathering the data more directly. I travelled to Moscow a month later and began working at the SOVA Center, collecting data on xenophobia and radical nationalist groups while also doing translation work for the Center's publications.

I deliberated over the title with my academic supervisor at the University of Pittsburgh just before I presented my research there. It's technically a misnomer, as the research itself has nothing to do with cartography or GIS-analysis. The main point of the title was to indicate two things: first, that the project would (eventually) include spatial analyses incorporating various GIS-techniques, and second, that the overall goal was to perform something of a survey – a comprehensive set of analyses – of the various elements and dynamics of xenophobia in Russia, thereby ‘mapping’ it and its dimensions in a rather abstract way.

— Did you happen upon something in the media or on social media? Have you seen cases of it yourself?

— In order to complete the project, I ended up reading plenty of mass media sources and some social media sources. I was careful to take into consideration any biases held by the various pieces I read, and I tried to expose myself to a diverse array of articles and other publications. Ultimately, the vast majority of the information and data that I used came from the SOVA Center.

— Did you have a chance to interview anyone taking part in the violent anti-migrant protests in Moscow?

— Unfortunately, no. I read about all of these incidents from a distance, that is, while I was in the U.S. But I never collected any primary data of my own through interviews or surveys.

The foremost reason I decided to study Russian is that I find it to be the single most beautiful language I've ever heard or even read. I've been exposed to many languages over the years, but I find Russian to be melodic and soothing.

— What are some of the main conclusions you have drawn on this issue?

— The research I did only scratches the surface of the issue, which means just as many questions arose as conclusions were made. Nevertheless, my general conclusions consist of the following:

First, when it comes to non-fatal attacks, youth subculture groups and anti-fascist groups suffer the greatest share of violence. Second, it seems that xenophobic violence does not vary significantly across various types of victims in the context of fatal attacks, nor does xenophobic violence vary greatly across the seasons of the year. Third, when analyzing xenophobic violence across geospatial dimensions, it would be more useful to focus on specific regions or cities; otherwise, it would be difficult to control for the disparity in population sizes between Russia's largest cities and other regions. Finally, policymakers would do well to focus their attention on framing anti-extremism policy according the following criteria regarding radical nationalist groups: interregional and/or national organizations, movements, or coalitions that refer to themselves as social, social-political, all-Russian, or ultra-radical; that use websites, newspapers, or blogs; and that rely on Tsarist, National Socialist, and/or communist symbols.

— How was it that you came to learn Russian?

— Much of my studies in Russian have been through formal instruction at two universities: Samford University in Birmingham, Alabama and the University of Pittsburgh in Pittsburgh, Pennsylvania. I studied for two years at Samford and one year at Pitt. I also studied advanced Russian at Moscow State University in summer 2014 when I travelled to Moscow for an eleven-week work/study programme with the School of Russian and Asian Studies (SRAS).

Otherwise, I've learned Russian simply by absorbing it casually through leisure reading, media, and conversation. The foremost reason I decided to study Russian is that I find it to be the single most beautiful language I've ever heard or even read. I've been exposed to many languages over the years, but I find Russian to be melodic and soothing. All in all, Russian is a very rich and formidable language, and I knew from the beginning that no language is worth the trouble if it isn't pleasing in the ears and on the tongue of the learner.

— How do you enjoy living and studying in Moscow? What are the top five places you like to go?

— I love Moscow. I simply love it. I don't love it because it's nice; rather, I love it because there's so much potential, development, and growth going on right now, and I want to be part of it. My top five places are Vorobyovy Gori/Park Kultury, Moscow State University, the entire area around HSE at 20 Myasnitskaya, Chistiye Prudy, and the area around Tretyakovskaya.

— What would be your message to your friends at the University of Pittsburgh? How would you describe your international experience, and would you recommend other international students also come to study in one of the Master’s programmes at HSE?

— For people who like or love Russia or Eurasia, the obvious choice is to come to Moscow and study at HSE. I pride myself in being a global citizen, and that's a status that I would love for every person to obtain. Coming to study at HSE is definitely a great way to realize it. I would recommend anyone to come to Moscow and study at HSE – quite honestly anyone (as is evidenced by the fact that I've advertised our Population and Development programme on Facebook several times).