Policy Space and the Human Rights Week: a Global Concern for the Expression and Capacity

The Student Chamber of the Department of Public Policy at National Research University Higher School of Economics celebrated Human Rights Week – in honor of the adoption of Universal Declaration of Human Rights – by hosting a series of activities, a film screening, and write-for-rights by Amnesty International, a privilege walk and a play, performed by students from the department.

A day after the Human Rights Day, on Monday, December 11, a touching documentary – Malala –was brought to screen by the Student Chamber. The documentary was about a Pakistani teenager Malala Yousafzai, who emerged as a leading advocate for children’s rights after the Taliban tried to kill her for speaking out on behalf of girl’s education. The inspiring documentary encapsulated the Rights of the Child including the right to the freedom of development. 'This is an amazing film,' said Rahul Mishra, a student from India, 'the right to education truly lies upon the efforts made by each and every individual.'
The holistic understanding of the human rights does underscore emphatically the capacity building approach and the idea where “a life with dignity and without fear” shall be our common concern.  Following the screening, on December 14, Amnesty International Russia was invited by the Student Chamber to give a talk on their respected organization and on cases of human rights violations that have occurred in various countries. After the talk, students, professors, and speakers engaged in an informal discussion where everyone was free to share their opinions on human rights.

I would consider the event successful because we all were informed about the many human rights abuses taking place everywhere and I especially enjoyed the write-for-rights activity. On the same day, a privilege walk was also organized by the Student Chamber to address inequality and raise awareness. Students and professors of various nationalities and backgrounds participated in this activity. This particular walk was designed with questions spanning many different areas of marginalization, because the goal of this walk was to understand intersectionality. 'I really liked the privilege walk. It really showed me that people come from such different backgrounds and we don’t realize it!' said Alessandra Menga, exchange student from Italy. The celebration of Human Rights day on the December 10 at HSE has been one of the key events in the cultural calendar of our Public Policy Department. Human rights celebration is not only about the essentials and the deliverables that the civil society keeps reminding about and demanding from the authorities but also about renewing the pledge for being more empathetic and committed to the concerns of the millions whose capacity as free and happy human beings are constrained or restrained.

I do believe that our students from the Public Policy Department, who celebrate this event each year, are keeping their faith in the following credo: an ideal for effective policy making, whereby the concerns for the commons do matter and are taken into consideration when suggesting, forming and implementing policy. At the end of the day, this is about public policy. Or, in other words, it’s about channeling Lincoln‘s great dictum in our policy learning space - ’for the public, of the public, and for sure by the public’. 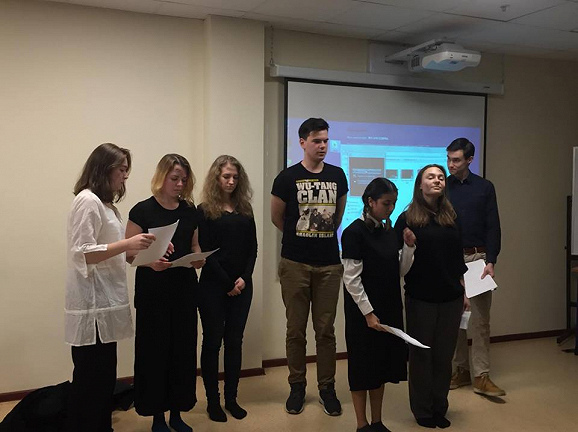 The last event was the play on the December 15, which depicted a scene from the Holocaust. It was a touching performance which brought many spectators to tears.  The first-year students did a marvelous presentation under the co-ordination of Yulia Potapova who picked up the thread to show the atrocities against the innocents and the unprecedented brutality of the Nazi regime against humanity on the European continent. It is topical to note that while the global space is indeed shrinking and the dynamics of globalization looks irreversible, the world has noticed a new frenzy of far-right political parties scoring massive electoral gains in the European political space. Human Rights Week, organized by the Student Chamber of Public Policy Department, was a great sucess.

It is important to hold events such as these to spread awareness about human rights. We may know a lot but there is still so much information we don't know. It is both meaningful and fun

Sanjay Rajhans summed it up by saying that he feels really inspired and encouraged among the students of the Public Policy Department who are all very talented and have a very positive attitude towards life. They possess the right academic skills for future challenges, working as successful policy makers and analysts. Therefore, what they do in the public sphere has a strong and positive impact on those who matter the most – the ’Public’.


by You Li and Bhurgri Mahrukh, first-year students of Political Analysis and Public Policy programme