The week long International Winter School on Human Rights got organized in the Forli Campus of University of Bologna from 9th -13th of January 2017.  A unique  yearly project jointly initiated by Prof. Nina Yurievna Belyaeva, from the Higher school of Economics along with her illustrious partner from the University of Bologna ( Italy most notably  Prof Marco Balboni and Prof Carmello Danisi )  and International Institute of Human Rights ( Rene Cassin Foundation, Strasbourg).

This yearly congregation  of the scholars, students and the young researchers have become a calendar event for many of us who are engaged in the subject of Human Rights subject the venue of which keep rotating at each one of the three places and while in the year 2016 HSE did organize and host this school on Human rights, in the year 2017 the host institution was University of Bologna.Gauging the constraints and the changing geo political reality in which the discussion on the application and promotion of Human Rights across the globe has necessitated a new approach, the central theme of this year’s Winter School was “Human Rights as a Horizontal Issue in EU External Policy”.  The school turned out to be a blockbuster in the terms of the quality and the quantity of both the audience/ students and the great speakers that included many a  MEP( Members of European Parliament), lead experts and advisors of the European Commission and top researchers from the University of Oxford, University of Leuven, European University Institute  among others.

The school got inaugurated on the 9th of January by the leaders of this school Prof Belyaeva and Prof Balboni. The key note speaker on this day was Dr Nathalie Tocci, a leading European Foreign policy expert and key policy advisor to the European Commission Vice President Federica Mogherini on the subject of the Human rights and democratic governance. Dr.Tocci had spoken at length about the new found constraints that the EU has been facing of late in the promotion of the Human rights in the democratic transition space and underscored the importance of the new and horizontality of the discussion approach that is a pre-eminent thing for promoting the Human rights issue.  Coupled with the financial crisis, the massive refugee crisis has tied the EU hands considerably on the forceful articulation of the Human Rights both near abroad and beyond and that has created both a challenge and an opportunity to enrich the mechanism and the process of the Human Rights promotion through more of a horizontal communication and incentivizing the momentum. 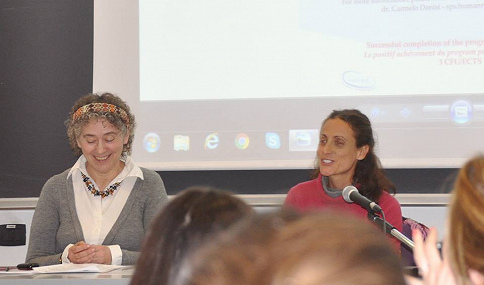 On the second day, Barbara Lochbihler, Vice-Chair of the Subcommittee on Human Rights/Foreign Affairs of the European Parliament started with a very self-introspecting discourse on the subject “The Role for the EU High Representative and the EU Parliament in an External Human Rights Strategy? Being a life-long adherent  on the issue of the Human Rights and freedom of conscience Dr. Lochbihiler gave the students and the audience an insider view the policy on Human Rights are formulated and implemented both at the European External Relations Service and the European Parliament. She did highlight the constraints and the limitation that the EU institution encounters on the consistent implementation of promoting the Human Rights agenda the deviation from the strategic policy path owing to the tactical needs that might have arisen. She was followed by Prof.  Chiara Cellerino from the University of Genova on the subject of “ The EU Court of Justice, Human Rights and the External Action”. She discussed at length regarding the role of the EU Court of Justice in the promotion of Human Rights beyond its political border and through the normative and soft power coupled with the legal mechanism, regulations and verdicts that it consolidates the universal values of the Human rights both within and beyond its space.

Dr Gjovalin Macaj from the University of Oxford discuss about the “The EU at the UN HRC” and the other sub theme “The EU and the Human Rights Treaty-based Bodies”. Dr. Macaj had given a very forthright and statistically coherent presentation regarding the critical role of the EU in the UN institutions most notably Human Rights commission and at the same time the problems of the EU in the consistent implementation of the same.The following day the discussion was in French by Professor Romain Tinière, University of  Grenoble on the subject of “The interaction between the European Union and the Council of Europe in the "European" definition of human rights” and followed by the very central question on the issue of “ Council of Europe human rights standards as limits of the external action of the European Union”. Prof Mustapha Afroukh, Université de Montpellier followed after by discussion on the subject of  The European Union and the ECHR and the major normative and regulatory power that ECHR delegates to the EU by its rulings and  verdict and the Accession to the ECHR.

On the 12th of January the morning session was focused on the area of the EU’s outreach and engagement far across its custom and economic  space and was themed accordingly ““Developing” Human Rights-based Relations” observing three of the critical geographical mass, Post- Soviet Space, Asia and Latin America,the areas that have gone through the democratic transition and have seen the slide back and forth on the consolidation and repression of the Human Rights and the EU’s engagement and estrangement on this issue. Besides this morning jam packed session had the panel of the HSE speakers led by the Department of Public Policy academic supervisor Prof Nina Belyaeva who is also the driving force behind this acclaimed International school on Human Rights. Prof Belyaeva initiated the discussion with the centrality of the theme “TheCoE, the ECHR and Russian Legal Order”. Documenting and analyzing to the captivated audience Prof Belyaeva discussed the evolution of the Russian legal order on the subject of the Human Rights and its troubled yet historical journey of the past quarter of a century.

Bringing the firsthand experience as the celebrated policy expert on the subject of the democratic governance and the Freedom of Peaceful assembly in Russia and range of regulations that has been promulgated in the post-soviet Russian constitution, Prof Belyaeva also spoke about the great importance that EU institutions engagement with its Russian counterpart had been  for the norms diffusion on the fairer and consistent understanding of the Human Rights issue and the increased awareness of the same in the far and wide of the Russian space.  She chronicled the bottom up policy discourse evolution on the subject of the Human rights law in the framework of the Russian legal order through the civil society institutions of Russia and its constant dialogue with the European counterparts.

The discussion was later taken up by Assistant Prof. Sanjay K. Rajhans who talked about the Asian engagement with the EU institutions and the “evolution of Horizontality” in the Human Rights issue in the past twenty five years between the Asian countries and EU. The discourse highlighted the intra- regional engagement of the EU with ASEAN and the bottle neck on the issue of promotion and observance the human rights in Asian countries that EU foreign policy institutions face owing to the emergence of the alternative  economic and political power structures that does not pre-condition the Human rights issue as forcefully and the credibility deficit that some of the  EU institutions face at times  in Asian circle  owing to its own flip flop in the Asian political and security theater. Prof Victor Albert did discuss the contribution of the South American space on the issue of the Human rights from the historical perspective and did further broach in the discussion about the engagement of the Latin American countries with the EU institutions.

In the afternoon session the students were addressed by the Vice President of the European Parliament Ms Ulrike Lunacek, on the subject of the “construction” of new norms for the protection of gender and LGBT persons. A subject of comparative sensitivity, she handled the subject with masterly precision and discussed her first hand journey on this arduous path for promoting the fairer rights to the sexual minorities and their fear free self- identity over the years in Europe over the years. The last day’s lecture was given by Prof Marise Cremona from European University Institute on the subject of “Human Rights as a value of EU trade policy” who spoke regarding the effectiveness of promoting the Human Rights in the Trade policy of the EU institutions and how it needs a better and more consistent implementation. As no discourse of the EU’s foreign policy engagement can be complete without its discussion on African area, the lecture by Cécile Kyenge, Member of the European Parliament and Vice Chair of the Delegation to the ACP-EU Joint Parliamentary Assembly   “ The EU-Africa Summit: A New Forum for Human Rights Promotion?”. 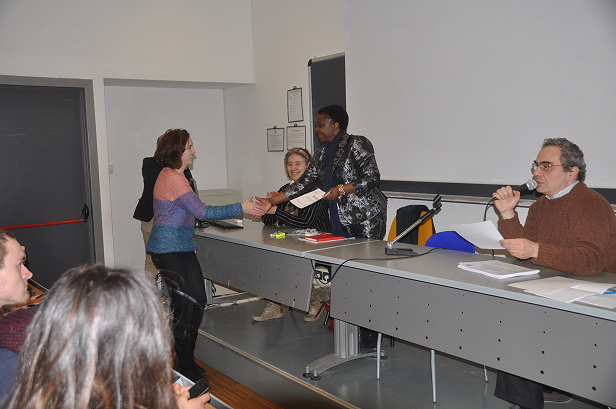 The week-long intensive learning at this winter school was so well choreographed by Prof Marco Balboni and Prof. Carmello Danisi who worked tirelessly to ensure the flawless time management, warm and sumptuous  Italian hospitality to all the participants of the school and quality of the learning process by inviting the galaxy of scholars from all the leading institutions of Europe coupled with the lead  Policy makers and policy advisors on the subject of Human Rights as a Horizontal Issue in EU External Policy. In the very happy closing ceremony, the sixty plus students that came from far and wide of Europe, South America and Russia were provided with the ECTS powered Certificate for the successful participation in this International school by the co-leaders of this endeavor Prof Marco Balboni and Prof Nina Belyaeva. Now the wait for the forthcoming and equally enriching  International School on Human Rights has already started - Ci vediamo di nuovo!