AR ‘Advanced Moscow Housing Prototype’ for 1000 people was developed by students of the international master program ‘Prototyping Future Cities’ under the guidance of Elena Mitrofanova and Ivan Mitrofanov. The project leader was the academic head of the programme, Vicente Guallart. This model is based on the principles of the distributed city development and considered as a single organism with its own metabolism, which is connected to the neighboring self-sufficient areas through the distributed network. The model was presented at the Moscow Urban Forum, 'Open City' conference and international architecture festival 'Zodchestvo'18'.

The prototype of the residential block, designed by students, consists of several houses and public spaces. They worked on it as part of the master's programme ‘Prototyping Future Cities’ when learning about how buildings are scaled.

In order to understand what a residential block of Moscow’s near future might look like, the students explored Moscow housing over the past one hundred years - from 1910 to 2010 - and selected 8 buildings for detailed analysis. ‘Moscow in the 20th century was a city of technological innovations,’ notes Elena Mitrofanova. ‘We studied examples of the most important houses over a one hundred-year period, focusing on technology development.’

Among the houses selected for analysis were not only samples of standard housing, but also the most prominent structures of the era. For example, the residential building ‘Patriarch’ was examined when looking at the period from the 90s to the 2000s. Included in the sample were: the House of the Moscow Merchant Society, the Narkomfin Building, the ‘Filigree House’, ‘The House on Legs’, ‘The House on Mosfilmovskaya’, and a complex in the experimental residential area, Chertanovo Severnoe.

When studying the evolution of housing it was important not only to observe how the technologies developed, but also to take into account the political and cultural background. The regulations and standards of housing construction over the entire one hundred years depended on the political situation and the decisions made by the country's leaders. Stalin was opposed to avant-garde and constructivism, while Khrushchev considered Stalin's epoch to be oversaturated with ‘architectural excesses’ and strove for simplification.

Over the course of the project, students examined how the residents interacted within others in the same apartment, as well as with their neighbors. They also looked at how the houses were related to the city.

For example, in pre-revolutionary times, apartments were large and had many rooms. The family had to have a separate dining room, store rooms and a back door leading to the courtyard. In the age of constructivism, the approach to housing was completely revised, as a result of which experimental communal houses appeared. Here, great importance was placed on public spaces and social interaction in everyday life. In the ‘Filigree House’, the inhabitants had more personal space and the apartments were connected by spacious ceremonial stairways. The K-7 Series in the 1950s and 1960s was a real breakthrough and made it possible to move towards mass industrialization and typification. This led to the migration of the rural population to cities. For these ‘new’ townspeople, special brochures were made up with recommendations on how to live in the residential block, as well as suggested daily routines.

The prototype housing created by the students is a mix of trends and solutions which either exist already or are at the design stage. The project is a residential complex on a block which is 100 by 150 meters. Similar blocks already exist in Moscow. This type of residential complex is being constructed all over the world has become a trend in recent years. The students have come up with options which involve changing its configuration depending on the location and number of prospective tenants, as well as its height.

Students were divided into groups and each group came up with its own design of the residential block for a population density of 1000 people. The final design includes, at the base of the block, a stylobate. There is an open courtyard in the center, which is where the commercial spaces are located.

There is a park, vegetable gardens, and eight multi-storey houses made of wooden panels. Seven of these houses are intended for purchase and rent, and the eighth is designed to be used as a hostel. The residential block caters to a wide variety of people, from students and young families to those who can afford an apartment with three rooms and a terrace on the upper floors of the building.

In order to create a viable economic model of the block, the project team consulted the company ‘Habidatum’, where research on this topic was conducted. The economic model of the block is as follows: 65% is housing for purchase by the future tenants, 10% is housing to be rented out, and 20% is for commercial spaces which cater to the wider city population and for commercial spaces which cater only to the residents of the block. The remaining 5% is intended for new businesses, such as fab labs, farms with artificial lighting, and small coworking spaces inside each building.

All the houses in the block have their own space which is located on the lower floors and has various functions. For example, in one of the houses, there is a restaurant and a farm with artificial lighting for growing vegetables all year round. In another building, there is a space to rent not only cars (electric cars), but also bicycles, scooters and segways. One of the unusual features of the block is that it allows deliveries to be made using drones. The designers of the project are certain that such a method of delivery will be quite common in the near future. They consider that their residential block will be well-suited to normal life and will not require restructuring or radical changes.

Environmentally friendly and energy efficient — the homes of the future

Wood and concrete were chosen for the construction of the residential block. This combination is becoming more and more popular, and several ‘wooden’ skyscrapers are currently under construction. This is due to an attempt by architects to engage in environmentally friendly construction in large cities. Furthermore, new technologies make it possible to create wooden structures which are fire-resistant. The residential block created by the students includes houses consisting of wooden panels and a concrete core with space for an elevator. Wooden panels are of several varieties and there are windows of different sizes. This flexible structure makes it possible to alter the appearance of the building, and the size of apartments can be adjusted depending on the needs of the tenants.

The roofs of all houses are beveled and oriented to the south in order to generate as much solar energy as possible via the solar panels located on the roof. Another environmentally friendly idea is the use of filtered rain water and ‘grey water’ (the water which is left over after washing hands, dishes and showering). After filtration and purification, this water can be used on the garden, for example.

From 2020, all houses built in the European Union must comply with new environmental regulations and be constructed with almost zero energy consumption.

Similar solutions are already common throughout the world and continue to evolve with each passing year. This means that the building must produce more energy than it consumes, it should not produce harmful emissions which pollute the environment, nor should it produce waste.

The energy efficiency of a building can be increased not only using solar panels. Solar panels are obviously not very effective in cities with very few sunny days per year. There are also geothermal, wind and hydro power methods. When designing an energy-efficient home, its location is very important. ‘In our project, we were not strongly attached to a specific locality,’ notes Elena Mitrofanova. ‘You can carry out computer simulations as part of the design process in order to understand the level of insulation, how the wind blows, how the water flows, and subsequently, which resources can be used. A major aspect of the energy efficiency of a building depends on what the facade looks like, its surface area, and how much sunlight it is exposed to. If these factors are taken into account, the building does less damage to the environment. When the life cycle of the building comes to an end, all the materials can be recycled’. 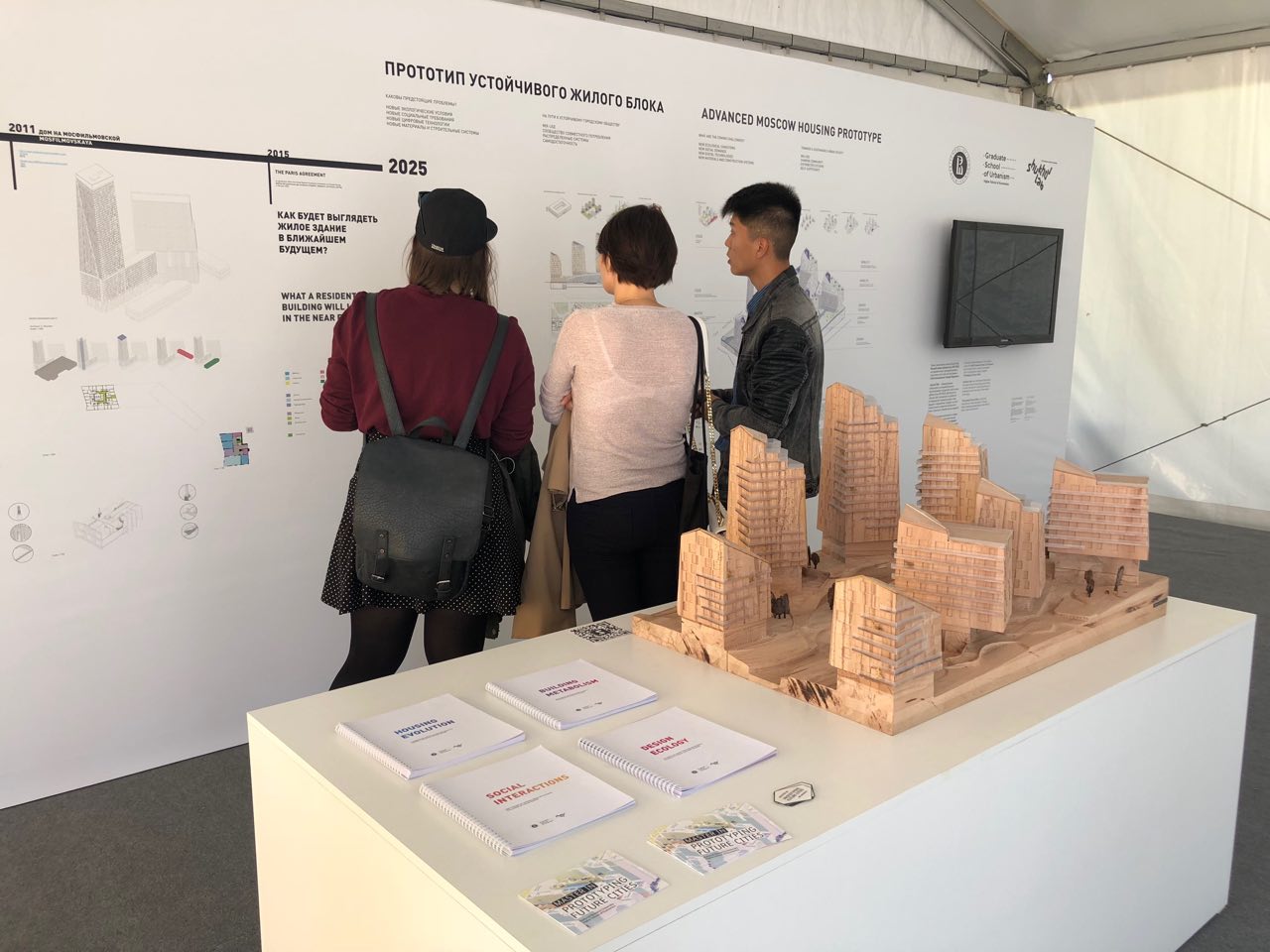 In order to understand how such a design is suited to everyday life and to learn about the latest trends in architecture and the construction of eco-friendly housing, the students attended a workshop in Barcelona. Here, they met with leading experts involved in the implementation of energy-efficient solutions. Barcelona is considered a world leader in smart city technologies and water purification systems are widely used in the city. This technology is gradually beginning to develop in Russia.

‘Multi-storey wooden houses are currently being designed,’ says Elena Mitrofanova. ‘However, in Russia, there are no standards for multi-storey apartment houses with wooden structures. Furthermore, the fire regulations are rather outdated and do not correspond to the technologies that already exist.’ In order to stimulate discussion of this issue, the students’ model was presented at the Urban Forum in Moscow in July.

‘Our goal is to develop a prototype on a real-life scale,’ says Elena Mitrofanova. ‘It may not be an entire residential block, but rather just part of the facade on a scale of 1:1 or a system that we included in our house design. It will take a lot of analytical and experimental work but we are striving to make our project become a reality.’