Three large-scale linguistic experiments were carried out in the context of this project. The first, behavioral, experiment was administered in populations of healthy monolingual speakers of Russian, bilingual Russian-American speakers of Russian, Russian-speaking patients with language impairment, and normally developing Russian-speaking monolingual children. The second experiment used a more sensitive method – eye-tracking – to examine the early automatic processing of linguistically encoded spatial relationships in a group of healthy adults. Finally, in order to gain finer-grained temporal evidence of whether healthy adults without neurological disorders and patients with language impairment rely on sensory-motor stereotypes, a third eye-tracking experiment was conducted.

The results demonstrate that normative groups of language users (adults as well as children) rely on motor stereotypes for comprehension of prepositional and instrumental spatial constructions, which indicates a general, automatic nature of this processing strategy. This is evidenced by shorter reaction times and a higher percentage of correct responses to prepositional and instrumental constructions with direct motor stereotypes in the behavioral experiments, and by eye movement data in the eye-tracking experiments. In contrast, in the group of bilingual speakers, the motor stereotype did not have
a significant effect either in the reaction time analysis or in the error rate analysis. Bilingual participants re 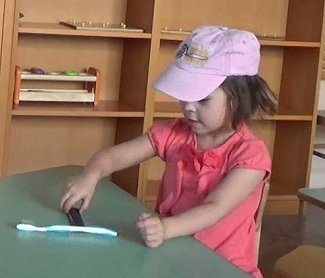 lied on the word order as the main cue for interpretation of the spatial relationships in a sentence, especially those bilinguals who had lower Russian proficiency ratings. This finding is interpreted from the point of view of cross-linguistic interference and language transfer. Interestingly, patient data also showed that word order plays a greater role than the motor stereotype for decoding spatial linguistic constructions. Regardless of the aphasia type (fluent or nonfluent), patients with aphasia interpret prepositional and instrumental sentences with direct word order better (more quickly and more accurately).
Thus, we can conclude that the strategy of reliance on motor stereotypes applies to normative populations of language speakers (both adults and children), but that speakers of nonnormative populations - bilinguals with attrited first language and patients with language impairment – rely on the word order as the main cue for decoding spatial relationships in the sentence, preferring direct to indirect word order. With regard to the differences in the online processing of spatial construction between healthy adults and patients with aphasia, pupillometry data indicate an early preference for direct word order in both populations of participants. This preference remains active at later stages of language processing in patients with aphasia but gives way to a preference of motor stereotypes in people without language impairment.

Chrabaszcz, A., Dragoy O. (2015). The role of linguistic and nonlinguistic factors in the processing of spatial constructions by monolingual and bilingual speakers. In D. Kryachkov (Ed.), The Magic of Innovation: New Trends in Language Research and Teaching Foreign Languages (pp. 352-357). Moscow: MGIMO-University.

Chrabaszcz, A., Dragoy O. (2015). The role of linguistic and nonlinguistic factors in the processing of spatial constructions by monolingual and bilingual speakers. The Magic of Innovation: New Trends in Language Research and Teaching Foreign Languages, April 24-25, 2015.Chrabaszcz, A., Dragoy, O., Iskra, E., and Bergelson, M. (2015). Understanding of spatial constructions by healthy people and patients with aphasia. Cognitive Science in Moscow, Moscow, Russia, June 16.