is the length of the animated film ‘Möbius and Eight’ by Alexandra Kuznetsova, an instructor at the HSE. The film was the winner in the B&W and Free Theme categories at the 1 Minuto film festival in Brazil.

The 1 Minuto festival has been held since 1996 and has since featured more than 20,000 films from 40 countries. The main criterion is that films presented for competition should not exceed 60 seconds in length.


Kuznetsova’s ‘Möbius and Eight’ is a reflection on the reticence of man in a series of circumstances, with the main character being the mathematician August Möbius.
Date
29 August  2014
Keywords
stat of the dayawardfaculty
About
Faculty of Communications, Media, and Design
About persons 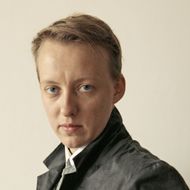 The News Service of the Higher School of Economics won the ‘Best Corporate Media’ award at the Internet Media Awards, which took place as part of the internet forum RIW 2014.