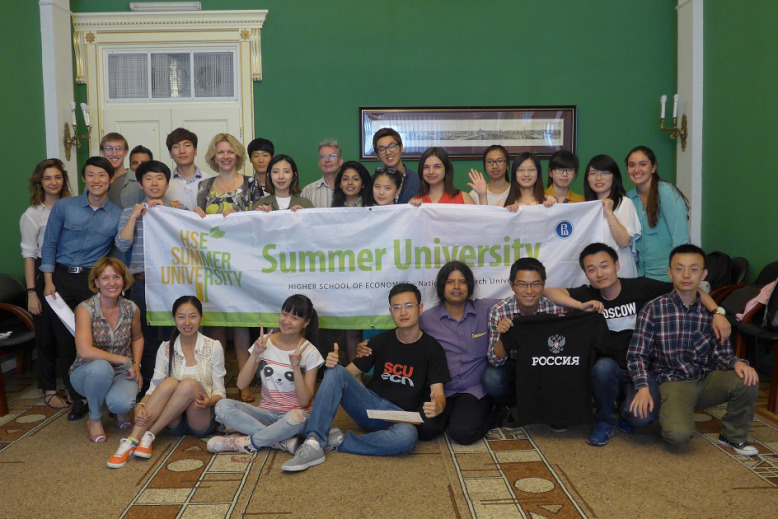 Students of the Summer University 2014

The Summer University started at HSE in 2014, and has since been developing and growing rapidly. Classes in this year's programme will take place between June 22 and August 8. Applications will be accepted until May 1.

Here are the innovations you can expect to see at the 2015 Summer University:

Not only does this year's programme have a larger number of the courses in the areas that are already customary and popular among students – those such as international relations, economics, Russian culture, and history – but an entirely new computer science division is being added as well. Instructors from the Faculty of Computer Science teach classes on both theoretical and practical topics such as computation theory, artificial intelligence, statistical diagnostics, natural language processing, distributed computing system creation, and compiler implementation. Both beginner and experienced programmers will be able to find something interesting at the Summer University.

Each participant in the Summer University can create his or her own academic plan, combining courses from various fields. Though there are no restrictions on the maximum number of classes that can be taken, students typically choose four or five courses, thereby receiving around 12 ECTS credits. The exact number of credits depends on the depth of the course, its difficulty, and its duration.

A full course catalogue for the Summer University can be found at the website.

2. Russian as a foreign language

The Russian as a foreign language course offering is expanding considerably. The Summer University will offer four levels ranging from beginner to advanced. ‘Russia has a lot of summer schools and classes in Russian as a foreign language, but it is only at HSE that Russian language courses come with such an intensive academic programme covering various fields of knowledge. It’s also important that students can receive ECTS credits for taking Russian language classes,’ Summer University Director Oksana Chernenko comments.

Last year's Summer University saw the participation of students from 12 countries around the world. This year, Russian students from any of the country’s universities are able to join our foreign guests, making the university even more multinational. International students will have the opportunity to talk with Russian students both formally during classes and informally, as all international students will be offered a student ‘buddy’ from HSE who will help them get to know their way around Moscow and HSE. Last year’s buddies were a huge success, which is why the buddy programme is continuing this year.

The 2015 Summer University is offering students from partner universities a 20% discount. There is also a larger discount for groups of 15 people or more. Find more information about tuition and discounts on Summer University site.

5. The Summer University in St. Petersburg

This year, the Summer University is expanding geographically thanks to a week of classes that will be held in St. Petersburg. Students will have the chance to take classes taught by instructors from HSE’s St. Petersburg Faculty of Social Sciences and Humanities. These classes centre on analyzing Russia’s most important political institutions, as well as the country’s role in regional and world politics. Students will also become familiarized with macrosociological approaches to the problem of discrimination against ethnic and religious minorities, as well as the history of science and technology. The week of classes will take place in St. Petersburg from July 27 through August 1.

Maria Besova
All news by the author
Topics
Education
Keywords
Invitation to participatepartnershipsinternational studentssummer university
About
Faculty of Computer Science, Saint-Petersburg School of Social Sciences and Area Studies
About persons