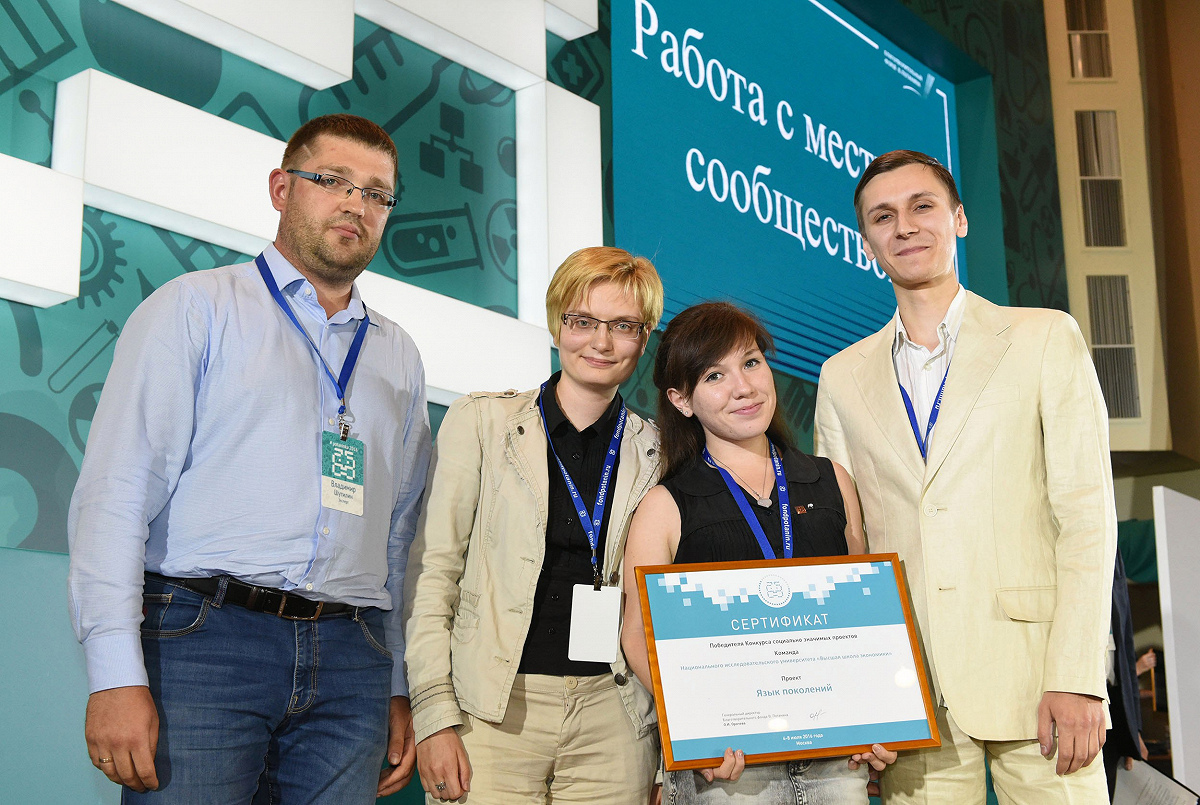 A project led by a group of HSE students and alumni called The Language of Generations has won a competition held by the Vladimir Potanin Foundation that is designed to recognize projects with social significance. The idea behind the project is to introduce foreign students of Russian to senior citizens from Russia. As a result, students will gain additional language practice, and older people will have the opportunity for additional communication.

‘All of us have aging parents and we know first-hand how they sometimes lack attention and opportunities for communication’, says Svetlana Pavshintseva, one of the project’s founders and a second-year student in the Public Administration Master’s programme at HSE. ‘The Language of Generations is a project that should solve the feeling of not being needed that some older Russians experience. To carry out the project, we will create a communication platform where older Russians will be able to communicate with foreign students who are studying Russian. At first, we plan for communication between students and older Russians to take place over Skype. Thanks to our project, older people will have the opportunity to share experiences and knowledge with the younger generation, to feel needed and wanted; in turn, foreign students will be able to practice communicating with native speakers without leaving their country to learn more about Russia’.

'The idea behind ​​the project came from CNA Speaking Exchange, a Brazilian educational project where students communicate through an online service with older Americans in nursing homes in Chicago', says Kirill Golubev, the project's other co-founder and a graduate of the Master's programme in Information Technology and Intellectual Property Law (HSE Faculty of Law). 'We thought, why not implement a similar idea in Russia? But we decided to focus not on nursing homes but rather on non-profit organizations that work with seniors. This decision was largely due to our partnership with a public resource centre in the Republic of Bashkortostan called “My Years - My Wealth”. In the future, we plan to involve NGOs in Moscow and other Russian regions in the project’.

According to Golubev, the project team’s main focus now is to actively involve young foreigners in the project, since there is an agreement in place with the Bashkir resource centre with 100 seniors already having expressed their willingness to communicate with students. While the communication will only take place in Russian for the time being, the founders of the project do not exclude elderly Russians who know English from taking part.

The project has a website, where a video service will soon offer a choice of topics for conversation and a button to communicate with the organizers. ‘We also plan to hold a live presentation for seniors and offer several demonstrational videos. In the future, we want to make control of the communication between foreign students and Russian seniors completely remote. In general, I have a dream that after some time we will launch an online Russian language school where retired former Russian teachers will offer lessons. For older people, this is an additional opportunity to earn money, and for foreigners a chance to study the language with native speakers’, said Golubev.

At the Vladimir Potanin Foundation competition, The Language of Generations won a grant to support its implementation. Earlier it was announced that the project reached the final stage of an Innovation in Education competition, which is held annually by the HSE Institute of Education; the final competition will be held in September.

A growing number of HSE University’s international students are actively learning Russian, even if their degree programme is taught entirely in English. To help them build fluency, the HSE University Preparatory Programme launched a Russian Speaking Club for its students in March 2021. Now, all HSE University's students, regardless of the programme they are in, can take part in the meetings.

The HSE Centre for International Preparatory Programmes is launching an intensive online course of Russian as a Foreign Language. The course will start on October 1, 2020 and will be part of a blended preparatory programme that aims to help international students gain proficiency in Russian so that they can enrol in Russian-taught undergraduate and graduate programmes. Registration for the course is already open.

Russian Language Unites: HSE Students Come Together for Online Classes While in Self-Isolation

Elena Aisakova teaches Russian to students of International Preparatory Programmes. Her five groups have all transitioned to distance learning. HSE News Service has asked Elena and HSE's international students what it’s like to study Russian online as well as what tips they have to help others learn effectively while being on ‘opposite sides’ of the computer screen.

If You Say So: HSE Launches New Open Access Resource for Studying Russian

Do you have some knowledge of Russian but want to hone your skills and speak like a ‘real Russian’? If so, faculty members and instructors of the HSE School of Linguistics have worked together to create a free online resource just for you. Как скажешь (‘If You Say So’), which will launch April 4, is a virtual textbook and workbook built around video clips that feature HSE faculty and students.

Russian Language: 'One Student's Mess is Another Student's Bliss'

'In fact, the Russian language is very logical and my task is to disclose this to my students', says Alevtina Iagodova who has been teaching Russian for over 20 years. At HSE University – St. Petersburg she gives Russian classes to exchange students, organizes a language club, and promotes the Russian culture awareness among foreigners. Recently, she has been invited by the University of Indonesia to lead a workshop in order to share her knowledge and experience of teaching Russian as a foreign language with the local colleagues.

For Sebastian Billy Anggara, a 20-year-old student from Kediri, Indonesia, coming to HSE to study has been like a dream come true. After learning about HSE from his older brother, who is studying international relations in the Faculty of World Economy and International Affairs, he decided to apply to the Faculty of Communications, Media and Design to do a Bachelor’s in Advertising and Public Relations. Since the programme is taught in Russian, he will first study at HSE’s Preparatory Year to master the language.

‘Everyone Finds It Challenging in the Beginning, but I’ve Progressed a Lot, and Now I Can Speak Russian Very Well’

On July 21, 2017, the graduation ceremony for the Preparatory Year programme was held. During the ceremony, more than 170 students from 40 countries received their diplomas, which will enable them to continue their studies in Russia.