Svetlana Cecovic, Assistant Professor in the Faculty of Humanities (School of Philology), came to the Higher School of Economics with the aim of working in an international environment, which she had become accustomed to during her PhD studies at the University of Louvain in Belgium.

Since arriving at HSE in 2016, she has been busy with a number of projects, including participation in major international conferences, such as the upcoming ‘East-West Relations: Interplay of Arts and Cultural Diplomacy, 1945-2017’ in Jyväskylä, Finland on February 24-25, where she will give a talk entitled 'This is how my century looks like': Cultural Diplomacy of the Russian Princess Zinaida Schakovskoy (1906-2001)’.

‘At HSE, I have a wonderful opportunity to work with three languages: French, English and Russian’, said Cecovic. ‘I teach in French, I prepare my publications and conferences in English, and I can establish and develop contacts with my Russian colleagues, which is a true pleasure for me’.

Apart from speaking at conferences, Cecovic is also preparing several articles for publication, including two French-language articles ‘Images of Russia in French-speaking Belgium in the Interwar Years: the example of the novel “La Matriochka” by Charles Plisnier’ and ‘An Encounter with the Russian “Mystery”: the cases of three Belgian Travelers in Russia (Emile Verhaeren, Jules Destrée and Pierre Daye)’.

‘I am also working on an article in English, I hope it will be finished soon’, she said. ‘It's about the first translations of Dostoevsky's novel in French-speaking Belgium and is based on some unpublished manuscripts found in Belgian archives’.

Cecovic offers the following advice for new faculty members at HSE and for those considering joining the university.

‘Enjoy the international environment and follow your research projects and ambitions even if you will certainly need some time to get used to a new university and a new way of doing things. Before Russia, I lived in three countries, and studied at different universities - I became a truly ‘multicultural’ person and I can tell you that it is something precious for me’. 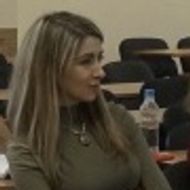