Intrinsic deficiencies rather than external shocks can turn the current slowdown in the Russian economy into a full-blown recession, research conducted at the Higher School of Economics has found.

Valery Mironov and Vadim Kanonov from the school's Center for Economic Development said Russia was vulnerable to sliding into an "autonomous recession" even without a significant decline in oil prices, Vedomosti reported Wednesday.

The research found that internal economic factors led to 47 "autonomous recessions" in 24 countries between 2000 and 2012. The study targeted countries of the Organization for Economic Cooperation and Development and BRIC nations.

The study's authors concluded that the main cause of autonomous recessions in those countries was the loss of competitiveness accompanied by rising labor costs and prices.

Since labor costs in Russia are rising three to four times faster than in Europe and prices are increasing twice as fast, the country's economy is in danger of sliding into a recession caused by internal rather than external factors, Mironov said.

He said capital flight and the disappearance of small businesses were also reducing the competitiveness of the national economy.

In the opinion of the study's authors, the best way to prevent an autonomous recession is through a tight monetary and budget policy and keeping inflation under control.

Promoting productivity growth is seen as another condition for giving the country a competitive edge.

Researchers note that an autonomous recession should not be feared, because it can facilitate a change of economic policy and contribute to a healthier economy.

If the Russian economy falls into a recession, maybe it will make the authorities realize that the old economic model no longer works, Mironov said. 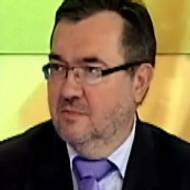 Valery Mironov
All news by the author