US PR-support for Russian WTO entry

Alexei Portansky, Professor at the HSE Faculty of World Economy and International Affairs, comments on the process of Russia's accession to the World Trade Organization.

The United States would like to see Russia as part of the World Trade Organization (WTO), Vice President Joseph Biden told Georgian leader Mikhail Saakashvili at their meeting in Rome. The American official also backed the idea of Moscow-Tbilisi negotiations on Russia’s accession to the organization.

At the same time, just a day after this notable statement was made, the Russian-Georgian talks in Geneva were once again postponed. US experts say that Joseph Biden is simply lending PR-support to Moscow in an attempt to show the absence of stagnation in the US-Russian “reset”. Professor at the Higher School of Economics and Director of the Information Bureau for the WTO Accession Alexei Portansky says he does not see any progress in Washington’s position declared in Rome.

"Biden’s statement is no big news. He said nearly the same during his recent visit to Moscow. Moscow, in its turn, expected him to agree to put some pressure on Tbilisi. And even back at that time, his aides were implying that the US would not play such a role, seeking to preserve neutrality. At the same time, they really want Moscow to end its WTO membership talks as soon as possible," Alexei Portansky said.

Tbilisi is urging Moscow to admit Georgian executives to the customs screening of cargoes at a section of the Russian-Georgian border which virtually ceased to exist after the formation of the two independent states of Abkhazia and South Ossetia in 2008. Now these are the Russian-Abkhazian and the Russian-South Ossetian border sections. The United States still fails to recognize political changes in the Caucasus following the 2008 conflict, which actually originates in its obvious unwillingness to use its authority in the eyes of Tbilisi and facilitate the final acceptance of one of the world’s leading economies to the WTO. Moscow realizes that the “Georgian problem” - as regards customs stations - is a purely political obstacle. This was, among other things, mentioned by Russian Deputy Prime Minister Sergei Ivanov during his visit to Washington in April this year.

Georgia’s current leadership is unlikely to abandon such a lever of pressure on the Russian side as the blocking of its WTO membership. The more so after Russian President Dmitry Medvedev stated that his country is “sick and tired of standing in the anteroom and trying to join this organization.” After that, he gave a signal to Vladimir Putin’s government to literally “assault” the WTO. This is what Alexander Portansky said on the issue:

"The World Trade Organization is now keeping to a tradition of taking membership decisions by consensus. In the present-day situation, if Georgia fails to change its stand, such consensus will scarcely be reached. However, from a legal point of view it will be still possible to join the WTO, with only two thirds of votes needed. We would prefer to acquire membership via consensus, not via the majority. The latter option would be simply inappropriate for a country like Russia," Alexander Portansky concluded.

This means that the issue will further emerge at Russian-American negotiations. Washington has found itself in a rather embarrassing situation. Naturally, WTO doors closed for Russia are not only a challenge for the Moscow-Tbilisi relations, given that Washington has long since been acting as adviser to the Georgian government. It will be therefore difficult to simultaneously advocate the US-Russian “reset” and neglect the Georgian position. 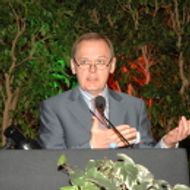 Alexey Portanskiy
All news by the author