We’re not indifferent, we won’t walk past someone in trouble – that’s the motto of the student charity “ICEF Outreach”. It was set up by a group of enthusiasts at ICEF a few years ago and since then has grown to bring together dozens of people across all the faculties of HSE. Chief coordinator of the project Anastasia Fedorova, told us about their most recent activities and trips to orphanages.

How did “ICEF Outreach” start?

More than five years ago, some students from ICEF wanted to bring a bit of variety into student life, by doing some projects that would bring students together outside the lecture theatre. One of the students, Maye Klisho had the idea of doing something for charity, and that’s how it all began.

They started off by collecting diapers for children in orphanages and helping at a veterinary clinic. Little by little, like minded “Vyshka” students from other faculties began to join in. Not long after, they had the idea of going to visit an orphanage and help the kids living there. They decided on the “Rodnichok” orphanage, then they started visiting other orphanages and these days, we are helping children in four different establishments.

Our care isn’t limited to providing material assistance. Some of them really don’t have enough of very basic things like toothpaste, toilet rolls, but the material deprivations are not the most serious problem in orphanages. Children living there are completely cut off from the world and we are doing everything in our power to make sure that they can become fully-fledged members of our society. Here’s a simple example – We often play a business game with the kids so that they can learn the basic principles of doing business and get to know the stages of setting up a private enterprise and how it works.  Recently we asked the children to exchange the money they had made for plastic cards. The children were very surprised that all their savings could be put into one card. So we try to take them on trips to Moscow so that they can get to know more about how life is in a big city.

Profession –orientated games are another important part of what we do as the kids will have to decide for themselves what they want to do, and how they want to live, without the help of parents to guide them or take them to clubs and activities, where they could develop their abilities. 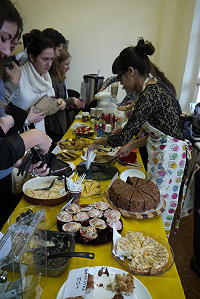 Who can join and how do you do it?

Generally, students just find out about it from one another and through the internet. When, on my very first visit to an orphanage, as we were leaving one of the girls asked me, “When are you coming back?” I couldn’t bear to say that I wasn’t coming back, so I started to get involved with the other students and became a member of the organisation. Now we have four orphanages under our patronage. About 40 people take part regularly in our activities and another 80 or so help out.

A lot of the money raised for the charity “ICEF Outreach” comes from selling cakes which the students themselves have baked. How did you get the idea to have “home-baked cake sales”?

The idea came from ICEF students who had been in the USA. There, cake sales are widely popular and a great way to raise money for charity. Selling souvenirs and trinkets that have been made by children is not such an effective way to raise money because we buy them rarely and selectively, whereas something tasty and baked by the students, well, like the English saying goes, “sells like hot cakes”!   And another thing, this gives students a chance to do something good themselves. Maybe they aren’t all ready psychologically to visit an orphanage but a cake-sale lets them contribute something to a good cause. We talk to the students who do the baking and it’s not long before lots of them want to join in our trips.

Usually we run our master class “ICEF Outreach” games using our own resources. “Vyshka” has the capacity to do that as there are lots of faculties with a wide range of courses and a great variety of students with many different, and sometimes unusual, interests. Recently, one student ran a master class in journalism at the orphanage in Yelat’ma. The kids all tried out their skills as reporters and camera crew. Sometimes people who aren’t directly connected with HSE come to us to get involved in our project.

You’re accepted to HSE! You’re going to Moscow! Now what? For many of our international students, Russia is a big change in terms of climate, culture, language, and city life. But not to worry—HSE has you covered. Read on for some pointers on how to prepare for the move and what to do once you arrive.