The Department of International Relations, International Laboratory on World Order Studies and the New Regionalism and School of Asian Studies of National Research University Higher School of Economics (HSE University) are holding the open session of Chinese Seminar. Our guest on Thursday, April 8, 2021 at 12:30 Moscow time will be a renowned Chinese economist (Justin) Lin Yifu. The topic of his talk is “China’s New Five-Year Plan as Movement Towards World Economic Leadership. Prospects, Challenges and Opportunities for Russia”. 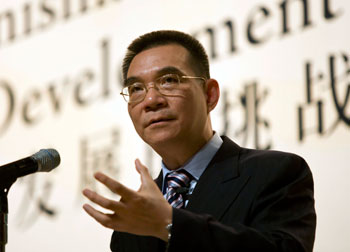 Lin received an Honorary Doctorate from Fordham in 2009 and was elected a Corresponding Fellow of the British Academy in 2010. His 2012 book, The Quest for Prosperity: How Developing Economies Can Take Off, argued for an active role for government in nurturing development, not just through the traditional provision of infrastructure and legal enforcement, but also by identifying and actively supporting industries that contribute to growth. Lin is the founder and first director of the China Center for Economic Research and a former professor of economics at Peking University and at the Hong Kong University of Science and Technology. He is also an adviser to the China Finance 40 Forum (CF40).

The seminar will be held in English via Zoom. To get access to the conference, please register in the form.

Date
8 April  12:30
About
International Laboratory on World Order Studies and the New Regionalism