One of the world’s most important book fairs, Argentinian fair lasted three whole weeks this year, from 23 April to 11 May. The Russian stand showcased over 400 books, and the Russian delegation included philosopher Vladimir Kantor, in whose life Argentina has played a special role. He brought with him the recently published full author’s version of the novel Fortress, which also includes an Argentina-related theme.

Professor Kantor says: ‘We don’t often travel to the antipodes. I mean Argentina. For me it was really important, as after all my father was born in 1922 in Buenos Aires. His parents then took him to the Soviet Union. So the theme of Argentina proved particularly important to my family life — guests, indoor sculptures, lithographs — everything was from Argentina. And then I started work on my Russia-Argentina novel Fortress, which took me 24 years to write, and then a similar amount of time to publish. It was published this year, finally, in the full, author’s edition.’

‘To my surprise that coincided with the international book fair in Buenos Aires, where Russia’s exhibition was themed ‘living classics’. Suddenly the novel Fortress that had been rejected 100 times for not being generic, was just what was needed at the Russia-Argentina literary gatherings. Some were quite unexpected, such as — say, Kantor meeting Borges and Casares.' 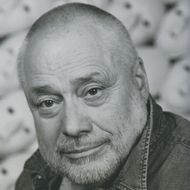