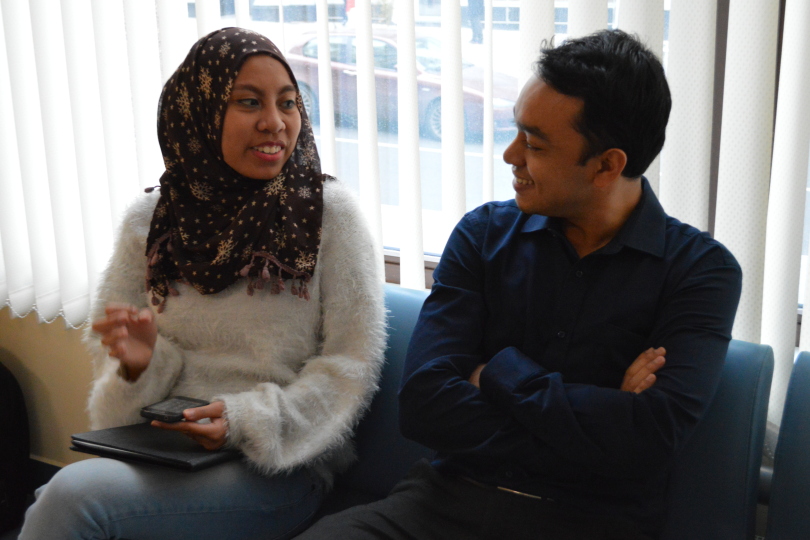 Wanda Umagapi and Isa Muhammed from Indonesia have come to HSE in order to study on the English-taught master’s programme in Political Analysis and Public Policy. They hope to learn how to deal with major issues in their country. In an interview with online student magazine ReadSquare they share their experience of living and studying in Russia.

Isa: I have been learning about Russia since high school. It is certainly culturally and politically unique. Russia has the biggest territory in the world and the way Russian government manages differences in ethnicities and religions is really interesting. Similarly, Indonesia is one of the largest archipelago countries, with almost eighteen thousand islands, over two hundred local languages, and hundreds of ethnic and other identities. As a future policy-maker I want to understand how to deal with these differences of ethnicities and identities and to develop a fair policy for as many people as possible. When people found out that I was going to Russia, a common reaction was “Why?” I had to explain that Moscow is a cosmopolitan city and that people from all around the world come here to live and work. It is hard to argue with numbers, so I gave them some statistics: 1.5 million Muslims live in Moscow, about 10% of the population.

Wanda: Actually, I decided to come to Russia because of the Russians I’d met when I was in India. I joined a student exchange programme there and met some great people. I became close friends with some Russians and interacting with more became my main motivation to come here. The culture and history of this country also interest me a lot. I believe that we shouldn’t judge the book by its cover as Russia is not what Western media would lead us to believe. Russian people are so nice, they respect each other and are great to socialize with!

I joined the Best Buddies club here. It is a nonprofit organization dedicated to establishing a global volunteer movement that creates opportunities for one-to-one friendship, integrated employment and leadership development for people with intellectual and developmental disabilities (IDD).  I learned so much from people like them - they taught me gratitude, optimism, and to have no regrets.

At the end of September, the Sports Festival was held on the birthday of Eunice Kennedy Shrive, the founder of the Special Olympics. That was such a great experience! I loved how everything was organized and how well-prepared the volunteers were. All participants were happy and excited, so the aim of the event – to encourage people with developmental disabilities to socialize and to inspire confidence in the parents of such people – was successfully achieved.

Unexpected and enlightening experiences like these have really changed my perception about Russia. I personally experienced lots of adventures and journeys during my stay here, and I continue to look forward to more. 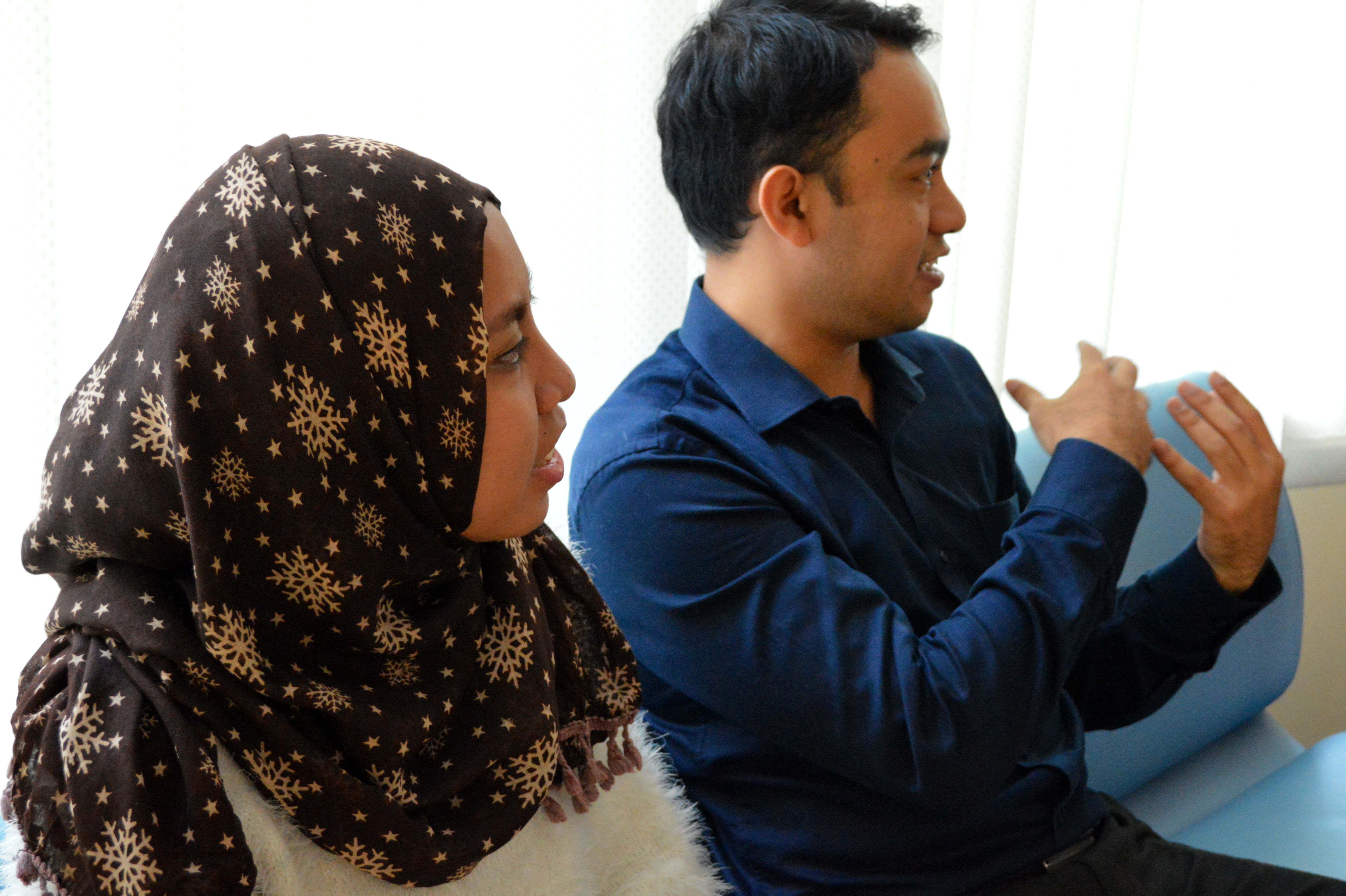 Isa: I chose the Public Policy and Political Analysis programme because I’m interested in migration. Currently, refugee and migrant-related issues are a controversial matter in my country. Here, I can learn to formulate migration policy related to refugees in particular.

These refugees, mostly from the Middle East, come to Indonesia as a transit country on their way to Australia. They stay and wait for their refugee status to be decided, which determines whether they are actually refugees or whether they’d just left their country to find a better job. This process is difficult and can take years. The refugees stay in Indonesia with the support of the United Nations Higher Commissioner of Refugees and also the International Organization for Migration. They cannot work and their children cannot go to school, because Indonesia has not ratified and signed the International Convention for Refugees. In some cases, refugees marry Indonesian women – even though they don’t have any legal identity. Theirs is a very difficult situation.

In 2013 I worked as an operational assistant for the International Organization of Migration. We were working in the field: interacting with the police, with migration officers, with refugees, and asylum seekers. I know their stories and their problems; which is why I want to study migration policy – to learn how to govern these issues without neglecting the rights of migrants as well as Indonesian people.

The studies here at HSE are re-enforced by an unusually large international student body, which also guides my learning. I learn not only during classes but also from conversations with my classmates. I am an open-minded person and I like to learn about different cultures and to make friends from different countries.

Wanda: My bachelor’s degree is in International Relations. Studying Public Policy was a natural way of continuing my education. One of the reasons my parents gave me permission to go abroad was the choice of programme itself.

Studying here is also different from what I’d expected: one has a lot to deal with, in terms of home assignments as well as paperwork upon arrival. But frankly speaking, I believe that the right mentality is the key to dealing with these things and to enjoying one’s days here and having as many wonderful adventures as possible! Also, I’m really grateful to the International Office and the programme manager for my department because they are really welcoming and helpful. 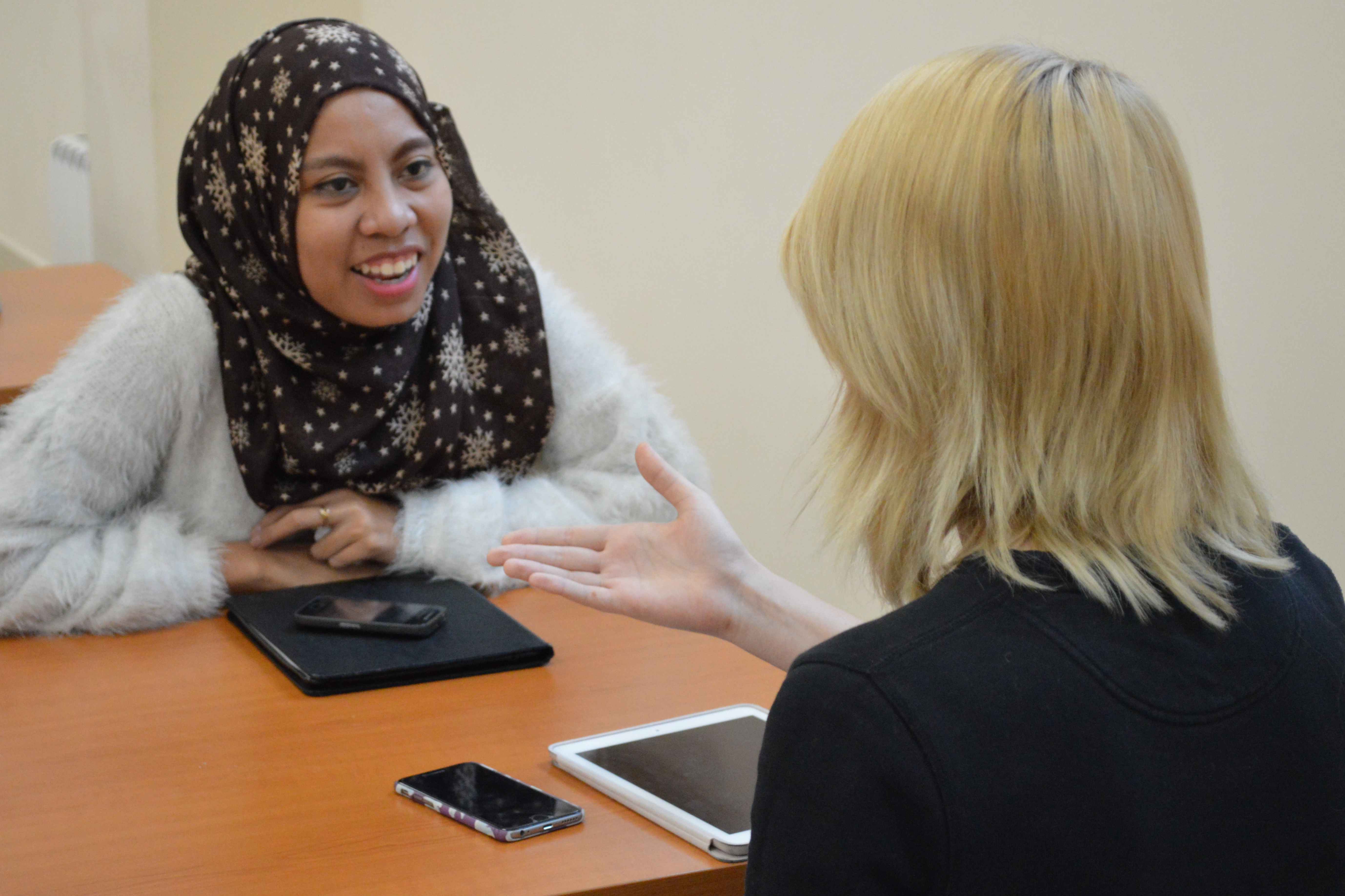 Dealing with challenges of living in Russia

Isa: Language is a challenge. I ‘ve already got lost in the metro about ten times. I will take up Russian language in earnest next January but for now I’m trying to learn Russian by myself with the help of friends. Food is definitely also a challenge. One of the first phrases I learned in Russian was “No свинина” which means “no pork”. Also, halal products are sold only in supermarkets. It can be hard to find halal food in the minimarkets near our dormitory.

I am a Muslim and I need to pray five times a day. Fortunately, my classes always start in the afternoon and so I can pray before going to class, but if the courses start in the morning or at midday, it could become a problem. I already asked the international students office to help accommodate my prayers, but they don’t have any special rooms for that. I have to find an empty classroom and pray there. Generally, I feel that Russian people are very nice – I don’t feel any discrimination.

Wanda: At first it was difficult to choose food in the cafeteria, and to explain that I don’t eat pork. But people are very helpful. One of the women who works there now tells me if I can eat a certain dish or not.

As I cannot pray five times a day here, I have to combine prayers. I do often skip prayers because of the schedule. As a Muslim woman I wear a scarf, the hijab. On campus there are only two of us who wear hijabs – me and another student from Pakistan. So in my class or in the cafeteria I am usually the only person wearing a hijab. But I don’t see it as a problem – young people in the university don’t really care about it.

Indonesia is a very liberal country. People are not really strict when it comes to religion. Muslim women have to wear the hijab, but nowadays some young women do not do this until marriage, and everybody is alright with it. My parents even suggested that I not wear the hijab in Russia, as Muslims are a religious minority here. They said that maybe I could go back to wearing it after I graduate and return to Indonesia. But I decided to wear it here anyway.

In the metro, children and older people do stare at me sometimes. I am fine with that though. I understand that people are intrigued by something different in their environment. In Indonesia the same thing would happen if people saw someone wearing a mini-skirt or a sleeveless top. If people are looking at you, it doesn’t necessarily mean that they are judging you. I haven’t felt discriminated against in Russia either. Our campus is a multicultural environment; I’ve made friends with different people from different countries. My roommate in the dorm, for example, is a Christian from Ghana. I think that it’s good to learn and absorb the experiences of different cultures.