It was Nikolay Kazantsev, Lecturer in the Faculty of Business and Management, who came up with the idea to create the first symphony orchestra in HSE’s history. He believes that a university orchestra is part of the culture at any large international university. Nikolay played the cello in a similar orchestra as an exchange student at the University of Münster in Germany.

The orchestra director is Vladimir Yatskevich, who also serves as intern of opera and symphony conducting at the Gnesiny Russian Academy of Music, artistic director at the Bolshoi Theatre chamber choir, and artistic director at the Astera male choir. ‘I was very enthusiastic to accept the offer to head the HSE orchestra’, Vladimir said. ‘I believe that music should be heard not only in a conservatory, but within the university walls as well. We are now at the stage of forming our musical team’.

The first orchestra rehearsals took place at the HSE Faculty of Humanities assembly hall and demonstrated interest among both students and lecturers. ‘It’s amazing that our orchestra can bring together people from different generations, students and professors both within and beyond the university. Importantly, our orchestra welcomes not only HSE students and staff, but talented musicians from the other universities. Age and musical background, whether from a music school or college, are not crucial. The most important thing is the willingness to play and develop your skills’, Vladimir said.

The orchestra repertoire is quite varied. At rehearsals they play parts from Carmen and Rigoletto operas, popular Christmas tunes, film soundtracks, and many other works. A suggestion has been made to learn the HSE anthem and play it during the HSE Day festivities.

‘I learned to play the flute at the Tchaikovsky Moscow State Conservatory College, but I had to leave because of personal reasons. Now I’m a second-year student at the Moscow Power Engineering Institute. I learned about the HSE orchestra from a group on VK and immediately decided to come to the audition, since I was missing music a lot’, said Ksenia Polyanskaya, a member of the orchestra.

‘I learned about the orchestra thanks to the Force Majeure choir, where I sing’, said Olesya Babina, a first-year undergraduate student of Cultural Studies at HSE. ‘For me, it’s easier than for the other musicians since my instrument is the piano and I don’t have to bring it to the rehearsals every time’.

The orchestra has already been invited to play at ‘Professors’ Wednesdays’, an HSE project. It is planning at least two big concerts for New Year’s and the Graduation, as well as a performance at the April Conference. It is also planning to perform on several other stages across the city. ‘Several Moscow museums have preliminarily agreed. The main thing is to start playing. I’m also planning to attract alumni and students from the Gnesiny Russian Academy of Music, Tchaikovsky Conservatory, as well as musicians from the Galina Vishnevskaya Opera Centre, to our orchestra. This will serve as good motivation and a skills lesson for our orchestra musicians’, said Vladimir as he shared his plans.

The HSE symphony orchestra is still in the process of formation, and talented players of the violin, cello, viola, double bass, oboe, and other instruments are welcome to leave a comment in the VK group or send a message to the group admins for a chance to audition. 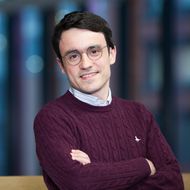