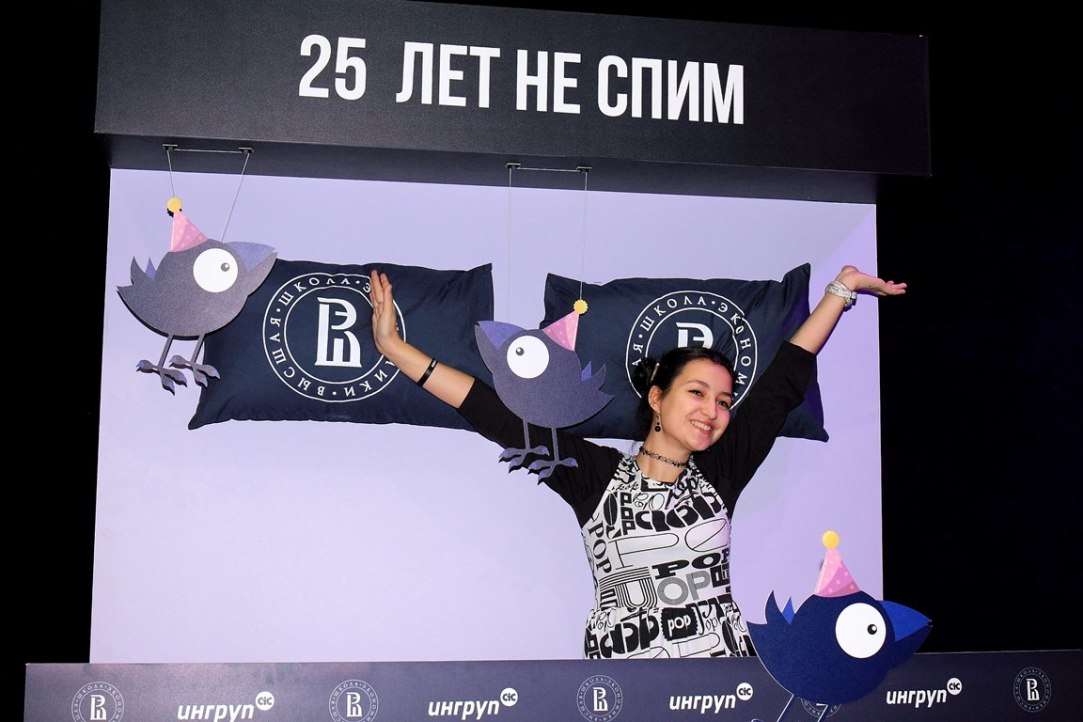 On November 27, HSE celebrated its 25th birthday with Anniversary Night (because an average birthday party would have been rather dull). The celebration featured an entire array of different activities, and HSE students themselves came up with the evening’s programme. Anniversary Night began with the finale of the Research Battles, and from 8:00 p.m. onward, the grand ‘Night’ festival by Ingroup CTC continued. To see and read more about how the event went, take a look at our coverage (photographs to be updated).

Not a Night Without Science

Anniversary Night featured the finale of the student Research Battles, where the winners of previous rounds battled with one another for the top prize. The idea behind the battles is that each researcher has only several minutes to go on stage and, without the help of a presentation, talk about what their research focuses on and how science and society will benefit. But they have to talk about it in a way that is clear even to people with no knowledge of their research field. The winner of the Research Battles is determined based on the votes of not only the jury, but the entire audience as well.

‘It’s not enough today to be smart or to invent something,’ Yaroslav Kuzminov noted at the opening of the battle. ‘Now you have to make yourself visible and recognisable. This is what’s called social skills. They include being able to break through to the understanding of people who are hearing about your project for the first time.’

The winner of the finale was political science student Kirill Chmel, who talked about the representation of the terrorist image in Russian media and about how images can affect public sentiment. His presentation was also interactive; the audience became part of a smaller experiment themselves. Kirill had placed photographs under their seats; on one of the photos was a fairly serious portrait of Kirill, while the others showed him with toys in varying poses. He asked the audience if they were ready to vote for the Research Battles participant displayed in the photograph. The majority chose the photo of Kirill hugging a stuffed alpaca for their vote, confirming the hypothesis that the method of presentation impacts public choice.

‘For me the Research Battle format is not just new, but it is super interesting and rewarding, unlike standard conferences or paper competitions, which oftentimes don’t allow for the entire “drive” behind research to be displayed,’ Kirill noted. ‘The idea behind the photographs was unexpected, but it allowed me to show that experiments in the social sciences can be fun.’

The top prize was a travel grant, which Kirill decided to split with his coauthor Maria Milos (both are fourth-year political science students). They plan to present at academic conferences in the U.S. and Europe.

After the Research Battle, the winners were announced for the ‘Steal the Wheel’ competition. The main idea behind the competition is to bring the successful educational and organisational practices of other universities to HSE. You can read more about the winners’ projects here.

Representatives from business and government came to wish the university a happy birthday as well.

Deputy Chief of Staff of the Russian Presidential Administration Sergey Kiriyenko, who is also a member of the HSE Supervisory Board, talked about how everything began and where the university was presently. ‘Let’s look back to 1992 when HSE was first being created – the country had a great number of serious problems, and then the decision is made to create a new learning establishment. It’s sort of a strange decision, but on the other hand it’s an adequate and wise one as well. There is nothing more important in our country than the people and their talent, intellect, and potential. That why at the time, 25 years ago, the most important contribution was made to our country’s development and future,’ he said. ‘[HSE] provides a good knowledge base, but most importantly, it gives you an open view of the world, as well as the ability to learn, bravery in your approaches, a unique way of thinking, and the confidence that you can manage any problem that life throws before you,’ Mr Kiriyenko added.

An old friend of HSE’s, Sberbank CEO and Chairman Herman Gref, congratulated students ‘not with the fact that HSE is older than the majority of them,’ but that they study at ‘the best university in the country.’ ‘As HSE’s largest employer I can say that the two universities whose students do not disappoint are the Higher School of Economics and the New Economic School,’ he said. ‘You are all incredibly stunning, and you know why? Because you are all smart, and that’s what’s most important.’

Deputy Chief of Government Staff Maxim Akimov quoted a novel whose author stated that curiosity about the future is a basic human characteristic. ‘Each time I come to HSE, I get the feeling that I’m coming to our future to a certain degree,’ he said. ‘And I think that with you our future is wonderful. Some things might not be simple, but I’m certain that everything will work out for us. I really believe in you all,’ Mr Akimov added.

Maxim Oreshkin couldn’t miss the anniversary celebration of his home university, of course. He called his student years ‘fun and carefree’ because at the time there were ‘still two periods of exams, so things were easier.’ ‘HSE is a place that gives you a certain feeling, and it is my wish for the university to remain as young and fun as always,’ Mr Oreshkin concluded.

The anniversary celebration continued in the form of a talk show with friends and graduates of HSE. At times, there were more show-like segments than there were conversations. For example, the hosts had Maxim Oreshkin and Yaroslav Kuzminov play games, and they also asked the rector where the name ‘Higher School of Economics’ coms from. It turns out there was no story behind the name, but also no one liked the name at first. Someone had noted that the abbreviation had strange associations with it that you couldn’t get rid of. How wrong this pessimist was!

Dmitry Levitsky, the founder and director of the bar chain Dorogaya, Ya Perezvonyu (Darling, I’ll Call You Back), was part of one of the first classes ever to receive a degree from the Higher School of Economics. ‘When I graduated from HSE, I spent 10 years doing entirely decent work in different industries, such as oil and gas,’ he explains. ‘Then I was sitting with a friend one night, also an HSE graduate, and one of us said, “We should open up our own bar.” For normal people, this idea comes closer to the morning, but not for us. I thought, sure I’ll open up one bar for the soul, but here I am having been in the industry for 10 years already,’ Dmitry Levitsky added.

Guests of the talk show included the founder of TV Rain, Natalia Sindeeva. Students of HSE regularly intern at her media holding. ‘I am incredibly envious of you and the place you study at,’ she said.

The popular video blogger Nikolay Sobolev reminded students of the I'm a Professional Olympiad, which gives undergraduate students the opportunity to go into a master’s programme or gives master’s students the chance to enter into post-graduate school, and it gives everyone the opportunity to find internships at large companies. ‘Afterwards, you’ll be able to get the coolest job possible,’ he said. ‘I’m not sure you’ll all become vloggers, but maybe economists. By the way, I also graduated from the economics faculty, but at a technical university, and this was a mistake. You have the chance not to repeat it and to find a job in your major,’ Nikolay concluded.

Then there was a spontaneous discotheque, a concert by a Manhattan cover group, a Miss and Mister Night contest, lectures (no, we cannot go even one night without them), a game show called ‘Where’s the Logic?’ physics experiments, booths for student organisations, and a scavenger hunt with prizes such as HSE souvenirs and gifts from the event’s partners (E&Y, GE, KPMG, Changellenge, Roza Khutor, and WorldQuant). The festivities lasted until 6:00 a.m. The best part was that guests were able to have fun without worrying about being tired the next day, as a lot of programmes officially cancelled class on November 28th.

'My Desire to Do Something Big Brought Me to HSE'

Irina Savelieva, HSE Tenured Professor, Professor in the Faculty of Humanities’ School of History, Director of the Poletayev Institute for Theoretical and Historical Studies in the Humanities, spoke on her deciding to work in academia, research and teaching achievements as well as her decision to join HSE.

Andrei Yakovlev, HSE Tenured Professor, Director of the Institute for Industrial and Market Studies,  member of the Academic Council spoke on his path to science, business journalism and international relations, global migration of scientific staff, as well as shared his thoughts on HSE research development.

'Creating a Faculty of Philosophy at HSE – An Interesting Task'

'At HSE There’s a Close-knit Team Focused on Research'

Fuad Aleskerov, Tenured Professor and Head of the Department of Mathematics of the Faculty of Economics, Head of the International Laboratory of Decision Choice and Analysis, Chief Scientist at the Laboratory for Experimental and Behavioral Economics, member of the Academic Council, spoke on his foray into science, as well as shared his thoughts on the development of HSE and mathematics in Russia.

'A Person’s Importance Is Determined not by Their Position, but by the Results of Their Work'

Maria Yudkevich, Vice Rector, Director of the Institute for Institutional Research, Associate Professor in the Faculty of Economic Sciences, Head of the International Research Laboratory for Institutional Analysis of Economic Reforms, and member of the HSE Academic Council, spoke on her path towards academia, research projects and achievements, as well as shared her thoughts on HSE research development.

‘Stolen Wheels’ to Serve the Good Turn for HSE

The results of the 'Steal the Wheel’ Competition have been decided. Entrants suggested implementing some useful practices at HSE that had proved their efficiency at other Russian or international universities, with the winners receiving their prizes at the beginning of December. The winning projects include new approaches to writing theses, organising space in classrooms, and submitting reports on academic trips.

Oleg Ananyin, Tenured Professor, Professor in the Department of Theoretical Economics (Faculty of Economic Sciences), Academic Supervisor of the ‘Politics. Economics. Philosophy’ master’s programme, Chairman of the Education and Teaching Methods Council, Member of the HSE Academic Council, spoke on his academic interests, as well as shared his thoughts on the development of HSE and Russian economic community.

HSE Opens an Exhibition at Khitrovka on History of the Place

This exhibition has become part of the Open University project and is held on the HSE’s Anti-versary. It covers the history of Khitrovka and its surroundings, and offers a historical view of each object.

According to the decision of Sergey Sobyanin, Mayor of Moscow, fourteen HSE staff members were officially recognised by Moscow Government, with the awards being timed to coincide with the 25th anniversary of the university.