As Head of HR, Elena Molodykh will be responsible for HR management at HSE Moscow and other campuses.

In addition to ensuring the quality of HR processes, her responsibilities will include the development and implementation of personnel policy with regard to administrative and support staff; introducing a performance management system; establishing an adaptive remuneration system; modernizing the hiring process for personnel; staff evaluation and development; establishing a career development system and young faculty development programme; and optimizing and automatizing personnel services and documentation.

Elena Molodykh has worked in HR in Russian and international companies in various industries for twenty years. She has worked as an HR director for over ten years. In 2000 Molodykh graduated from the Faculty of Sociology at Lomonosov Moscow State University. In 2000-2002 she worked at the recruitment agency Kelly Services. In 2002-2005 she was part of T&D department of Japan Tobacco International, and in 2005-2006 she supervised the hiring of personnel and development at STS Media. In 2006-2010 she was responsible for HR management at Jones Lang LaSalle. She was HR Director at BearingPoint from 2010-2016 and at Sibintek from 2016-2017. Molodykh is currently completing her studies in International HR Management (CIPD certified) at Kingston University (UK). 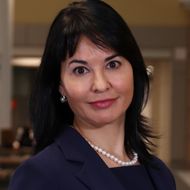