On February 28th the administration of the Higher School of Economics met with a delegation of U.S. universities’ administrations representatives, leading staff members of the Institute of International Education, USA, and the U.S. Department of State’s Bureau of Educational and Cultural Affairs (ECA).

The delegation was headed by Alina Romanowsky, Deputy Assistant Secretary of State for Academic Programs, and Allan Goodman, President and Chief Executive Officer of the Institute of International Education. The delegation included representatives from various U.S. universities and colleges, public and private, technical and classical.

Yaroslav Kuzminov, Rector of the HSE, was the first to welcome the guests at the meeting. He told the American colleagues about the modern problems of the Russian educational system as a whole, about the specifics of the HSE’s work, about the plans and the most important tasks facing the university over the few next years. ‘The Higher School of Economics, he said, is the only national research university in Russia which has a socio-economic and human science profile. In addition to that, our university is an expert analytical center of the Government of Russia and includes over 25 research institutes and centers in its structure. A specific feature of the Higher School of Economics is that all its departments are united by a solid team of professors, staff members and students who carry out joint educational, research and expert consultation activities. Our key tasks today are improving the quality of this team and developing the level of academic life and self-administration at the university’.

The rector shared with the U.S. colleagues his views on the main principles of the university’s human resource policy and the related difficulties which the HSE is facing. ‘Only two thirds of our teachers, he said, have a sufficient number of new scientific works and only a quarter of are published in international journals. This indicator is considerably higher than the country’s average, but, in our view, it is totally inadequate for the university’s further development and its successful integration into the international academic community’.

Summarizing his address, Yaroslav Kuzminov thanked the American delegation for their visit and emphasized: ‘We hope that we shall be able to develop a number of research and exchange programmes with leading international universities, including some U.S. ones, and we are ready to discuss the most promising areas of our scientific partnership and educational cooperation’.

The presentation prepared by Leonid Gokhberg, First Vice Rector of the HSE, was dedicated to the analysis of the HSE’s research and innovative strategies. Leonid Gokhberg told the audience about the research infrastructure, the sources of project funding and the key tasks of the research development at the university. He noted ‘Over the last three or four years we have created some research institutes and centers in various areas of knowledge, and their total number has reached 36. 29 research laboratories work within the university, and from this year they will be joined by 10 international research laboratories headed by prominent experts from the U.S., Great Britain, Austria and France’.

Vice Rector of the HSE Maria Yudkevich presented an analytical summary of the current situation, problems and prospects for the development of the university’s teaching staff, told the participants about the methods of attracting Russian and international specialists to the work at the HSE, about the university’s most productive initiatives and projects in recruitment, about the effective forms of project laboratories’ work which successfully combine education of students with giving them practical skills and competencies during interdisciplinary studies. According to the Vice Rector, obstacles for the university’s staff development are objective difficulties in the modern Russian education as well as the university’s internal problems, such as the unattractiveness of an academic career when compared with a career in business; high dispersion of research activity and productivity of researchers; insufficient number of group projects and low level of collaboration between faculties; high workload on teachers. Nevertheless, the university administration objectively analyzes the problem as a whole and develops and regularly updates the strategies of research work seeking the implementation of international academic standards at the university and the successful integration into the international community. 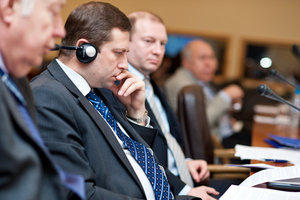 The speech by Boris Zhelezov, Head of the Office of International Academic Mobility, was about the development of various forms of cooperation and partnership between the HSE and the largest universities of Europe and the U.S. Boris Zhelezov paid special attention to the multidimensional inter-institutional collaboration between the HSE and George Mason University, USA, and through this example analyzed the main and the most productive forms and methods of mutually advantageous cooperation: academic exchange and double degree programmes, creation of joint laboratories, organization of video conferences in the ‘global classroom’ format, bilateral internship programmes, researches and summer schools.

After the presentations delivered by the HSE administration, the members of the American delegation had an opportunity to ask questions and exchange opinions on the prospects of cooperation between their universities and the Higher School of Economics.

Vadim Radaev, First Vice Rector of the HSE, answered a question about student exchange programmes between the HSE and U.S. universities and said that the university has developed a special programme for international students who do not speak Russian. ‘The university offers a programme of lecture courses in English, he said. We have started with disciplines which are core for our university: different aspects of economics, political science and sociology. This list will, of course, be expanded’.

According to Roman Kotov, Director of the HSE Center for International Education, who also participated in the meeting, collaboration between the HSE and American universities will develop dynamically. ‘Bilateral programmes of student exchange with the HSE already take place in 17 U.S. universities, he noticed, including such large universities as Brown University, Washington State University, Columbia University, Georgetown University and others. The importance of exchange activities is undoubted, and our university invites American students to participate in the work of various summer schools, including the School of Russian Studies, whose courses take 4 to 8 weeks and take place not only in Moscow, but also in Saint Petersburg. In addition to this, we are developing new programmes which will meet the needs of students of various specializations and various universities’.

This meeting was initiated and organized by the Institute of International Education, a leading U.S. non-commercial organization in international educational and scientific exchanges. The Institute was founded in 1919 and its numerous programmes are funded not only by the U.S. Department of State, but also by large corporations, banks, religious and charity institutions and international organizations. The Institute has offices in 13 countries, unites about 1000 universities in the world, supports statistical and political studies, administrates the Fulbright programme in 150 countries and organizes international conferences on the most topical themes.

Support from such a partner, certainly opens new opportunities for the Higher School of Economics in international cooperation and integration in the world academic and educational community.