Foreign Service members from around the world toured the complex and attended a presentation by HSE Rector Yaroslav Kuzminov and Vice Rector Ivan Prostakov regarding HSE’s growing stature as an international and multidisciplinary university.

Upon arriving to HSE University’s new campus on Pokrovsky Boulevard, Foreign Service members from Europe, North and South America, Asia, and Africa toured the premises. HSE students showed the visitors the cafeteria, which features a wide range of cuisines; the library, which is open 24/7; as well as the grand central atrium, which conjoins all of the buildings of the complex. The student guides drew the guests' attention to the complex’s unique architectural features that combine historic buildings dating back to the eighteenth century with modern ones.

‘We believe that this campus symbolizes some of the important things that we associate with this university,’ said Rector Yaroslav Kuzminov. ‘The merging of architectural styles into one cohesive complex symbolizes both the diversity and the unique character of our university. And the overarching atrium, which connects all parts of the complex, represents the freedom of academic openness.’

Yaroslav Kuzminov expressed his gratitude to the diplomats for attending, and underscored the important role educational institutions in their countries have played in making HSE University an international university. ‘Since the day of its foundation, HSE has been a university open to the world and a proud member of the global academic community,’ he said. ‘We have absorbed the best practices of education and research from our peers. In just 27 short years, our partners have helped us become one of the leading universities in Russia and a recognized institution on the global stage.'

He stressed that this is only the beginning. ‘Today we have around 400 partner universities across the world, and our international student enrolment includes 4,500 students from more than 100 countries. Every year we hire more than 60 international faculty members.’.

After Rector Yaroslav Kuzminov’s opening remarks, Vice Rector Ivan Prostakov summarized for the guests some of HSE University’s key milestones over the last two decades. Though initially founded as a hub for new economic theory and research, he explained, ‘Now we are not only a full-fledged interdisciplinary university, but many of our faculties and programmes rank in the world’s top 100 subject rankings – these fields include economics and econometrics, sociology, social sciences and management, mathematics, and more.’

The presence of all the guests at Thursday’s event particularly attested to the success of university's internationalisation initiatives. The Vice Rector noted that HSE University offers 49 double degree programmes in Moscow, two at its campus in Nizhny Novgorod, and six in St. Petersburg.

The Vice Rector concluded his remarks with the news that HSE Moscow will be hosting the THE Young Universities Summit in June 2020. It is not by chance that HSE University was selected to be next year’s Summit host – it is the only Russian university that consistently ranks among the THE top 100 young universities, and this year it took 60th place. 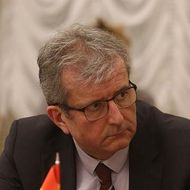 ‘We have been to HSE several times and collaborate on many very exciting projects with the university. One of them is the publication of several books on the history of diplomatic relations between Spain and Russia. And I also had the privilege of participating in a scientific conference last year on Spanish-Russian relations. We are very happy and proud to be here again.

‘The Embassy of Spain has been collaborating with HSE for a number of years, and we’ve seen HSE grow and change. This new building is incredible. HSE’s growth as an institution has been accompanied by an increasingly high international reputation. We are very happy to have more and more Spanish universities collaborate with HSE. In fact, not too long ago, HSE representatives were in Spain, where they had the opportunity to meet with about twenty universities. Certainly, the relationships between HSE and Spanish universities will only strengthen in the coming years.’ 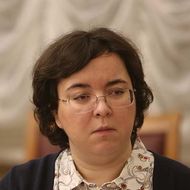 ‘I’ve been to many HSE buildings for many different events; this is my second time in the Pokrovka complex. The complex is magnificent; it makes me want to be a student again so that I, too, can study in such a wonderful place. Generally, however, insofar as I have been to many of HSE’s campuses, I think that the main striking aspect of this university is its students. They are always pleasant to interact with; when you look around the buildings, you see intelligent, cultured, and interesting faces.

‘We at the European Union Delegation often attend events organized by HSE, and we organize events ourselves as well through the European Framework Programme for innovation in research. We work closely with the Institute for Statistical Studies and Economics of Knowledge (ISSEK), and we have a rich base of contacts for exchange programmes.

‘As has been illustrated today, HSE and European institutions have enjoyed close collaboration for many years, and this cooperation is very effective, fruitful, successful, and we enjoy working with HSE. We always find support here, common interests, and it is always a pleasure. HSE for us is a big friend.’ 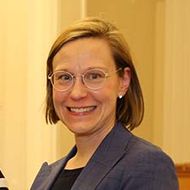 ‘I know HSE quite well. Last year I was working at HSE’s Institute of Education, where I was finishing my PhD. Just recently, I began working for the Finnish Embassy, and I was very happy to have the opportunity to come here again and see the new campus. This is my first time being at the new campus. It’s fantastic. What I particularly like about the space is that it seems very student-centred. There are many coworking areas for students to meet and collaborate —particularly at the new library.

‘HSE and Finnish institutions already have working partnerships, but I think it is important to strengthen these ties. There is always something more we can do. For example, currently, we have a number of students who study in St. Petersburg, but it would be great to encourage more Finnish students to come to Moscow as well.’

The event demonstrated the fact that it is not only diplomats who participate in international diplomacy, but universities as well. ‘Obviously the most important mission of diplomats is to serve as mediators between countries and maintain international dialogue,’ said Rector Kuzminov. ‘To a certain extent, universities perform a similar function through academic exchange programmes, thereby fostering a different kind of diplomacy – in knowledge and research. We are grateful to you as our partners. We look forward to developing further initiatives with you, as well as with countries that are not yet aware of our existence.’