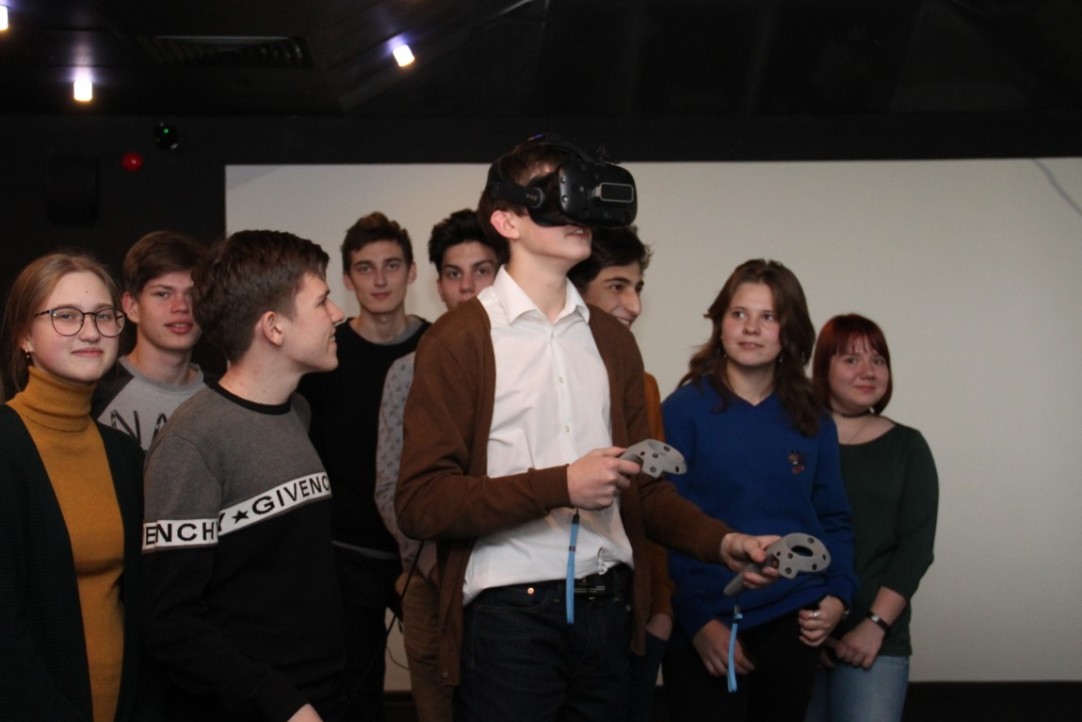 How do scientists steer satellites and remotely probe our planet’s surface? Researchers from HSE and other universities discussed questions such as this with students from 36 participating Moscow high schools as part of the city government’s Moscow School IT-Classes project. Eight educational partners, including HSE and Bauman Moscow State Technical University, are participating in the project, which aims to familiarize students with careers in IT.

The project not only aims to introduce students to the array of specializations that exist in IT, but to immerse them in them in specific areas as well. Project participants compete in subject-specific Olympiads and hackathons in addition to attending excursions and lectures at companies, universities, and research centres. Last semester, every other project event was hosted by HSE University—namely, the HSE Tikhonov Moscow Institute of Electronics and Mathematics (MIEM HSE) and HSE’s Faculty of Computer Science (FCS).

MIEM: Space, Robots, and the World of Digital Illusions

Students participating in the project had the opportunity to get a close-up look at what it is like to work in three MIEM laboratories, all of which use programming in various areas of science and engineering. Researchers at the Laboratory of Space Vehicles and Systems' Functional Safety, for example, use IT technology to control satellites. Due to their compact size, small satellites greatly enhance scientific research in a number of ways, such as facilitating remote sensing of the Earth’s surface, or, in other words, enabling scientists to observe our planet’s surface from space.

According to the laboratory’s lead engineer Dmitrii Abrameshin, small satellites, with their small size and weight, are not only representative of cosmonautics today, but also cosmonautics of the future. ‘They are used for observing the earth, conducting radar research, monitoring conditions in outer space, conducting cable system research, and many other tasks. Serious scientific work is underway around the world to develop new approaches to the design, construction, and operation of small satellites,’ he explains.

During the lecture, students learned what small satellites are, how they are tested, what sensors do, how Cubesat differs from the Orbikraft Pro platform, and how the Raspberry PI single-board computer is used in space technology. In classes, they assembled an onboard cable network of a small satellite and were even able to build a motion system for different subsystems.

In the Laboratory of 3D Visualization and Computer Graphics, students toured the world of digital illusions, after which they tried to create locations and models for AR / VR applications. At a cryptography master class, students delved into the Renaissance period and took part in the mysterious Black Cabinets competition. The quickest students who successfully worked with the ciphers went on to solve shorthand puzzles.

At the lectures, ‘Additive Technologies’ and ‘How 3D Printing Changed the World’, students learned about additive manufacturing, the practice of forming product and surface properties by applying materials layer by layer, as well as FDM printers. According to labo programmer Ilya Motaylenko, additive technologies help make the production cycles in a number of spheres faster and more economical in addition to producing products of higher quality with less waste.

The Laboratory of Computer-Aided Design Systems offered equally fascinating events for the students. The high schoolers learned about the role of automation in device design, how to conduct laboratory research, and what kinds of projects the current students of the lab are working on. Then, under the guidance of lab engineer Evgeny Lezhnev, they had the opportunity to design a simple robot—an autonomous wheeled platform—and programme it to move along a given line.

FCN: The Computer Game as an Art Form, Smart Glasses, and Artificial Intelligence

The Faculty of Computer Science hosted two blocks of the event: one block dealt with immersive technologies (from computer games to virtual reality), while the other introduced students to programme development and machine learning.

In the first block, participants learned everything there is to know about ‘serious games’, i.e., virtual simulators. In classes, professional game designers focused on the use of new technology in the industry. Maria Kochakova, game scriptwriter and narrative designer of the company, Narratorika, discussed what it is like to work in her field and how to create a computer game: she explained how the plot works and what techniques a game developer should know how to use.

Kirill Zolovkin, a leading game designer at OctoBox Interactive, led students through the plotline of the game, Gripper, in order to demonstrate how to tell a story in a computer game. ‘The classes with the students are not just a series of lectures, but an important sign—we began talking about narrative in games not only among professionals, but also in a language that is accessible to younger students,’ he says. ‘We hope that with the support of the HSE, we will be able to conduct more events like this that combine skills that are both fun and useful: how to create a game while telling a story in a modern format. I believe that in the next five years there will be many new, original, and smart games based on Russian culture. The 21st century may well become the same breakthrough time for Russian games as the 19th century was for literature.’

Pavel Manakhov, Assistant Professor of Software Engineering in the Faculty of Computer Science, led a seminar entitled, ‘Augmented Reality: How We Will Interact with Computers in the Near Future.’ Students discussed an imminent future in which augmented reality glasses are already widely used. Users in their daily lives work with spatial applications that are controlled with these glasses: they paint with their hands in the air, drive a car in the dark, and use digital doubles to communicate with people in other parts of the world. Professor Manakhov notes that making the use of smart glasses widespread comes with many challenges, one of which is the fundamental different methods companies use in organizing user interfaces. In order to deal with these challenges in research and in the industry, he says, we need people: designers, entrepreneurs, researchers, and developers. And in order to have an advantage in the future, we need to start studying the realities and capabilities of the market now.

Following the block of lectures on immersion technology, students participated in workshops led by Research Assistant Nikita Veselko of the International Laboratory for Intelligent Systems and Structural Analysis (FCS) on how to create their own games using Unreal Engine 4. In addition, Assistant Professor of the Department of Data Analysis and Artificial Intelligence Alexey Naznanov discussed one of computer culture’s underground scenes – the demoscene (in which programming is considered to be an art form and coding is combined with storytelling and video/audio editing).

In a programming workshop, Associate Professor Alexey Mitsyuk of the School of Software Engineering discussed programming’s present and future. ‘In recent years, there has been an amazing amount of new technology for software development, machine learning, and data analysis come out. Every year you hear about new impressive ways in which learning machines can be used. What does this mean for today's students? When they graduate from university, the world will be very different from how it is now,’ says Professor Mitsyuk. ‘Is it possible to somehow predict the ways in which technology will develop in order to better understand what is really worth learning now? We can’t see into the future. But you can use your imagination and build models, which is what we did with the student who attended the lectures at the HSE.’

In between classes, students took an orientation tour of the FCS and the Pokrovka complex. They saw where FCS students take their classes, study (i.e., the new library), walked around the grounds, and took some great photos.

is the number of hours that students will have to create a prototype of an ‘iron’ product for the HSE Hackathon, which will be held September 25-27.