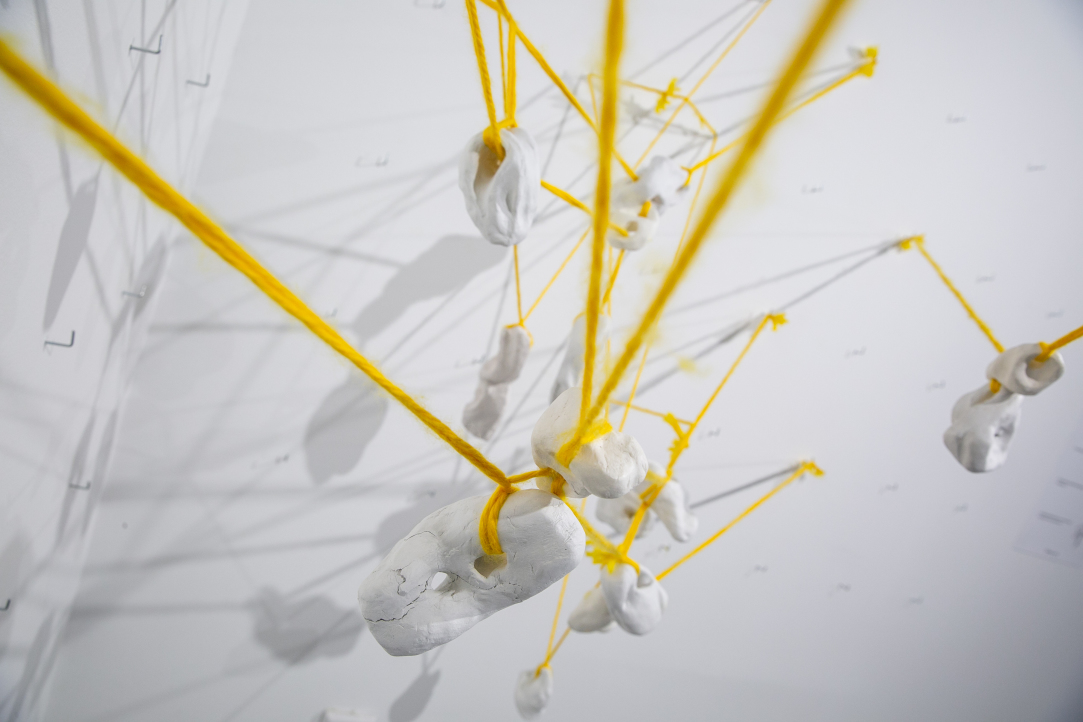 Daniil Dvinskikh, ‘The Birth of the Language of Everything Possible’ 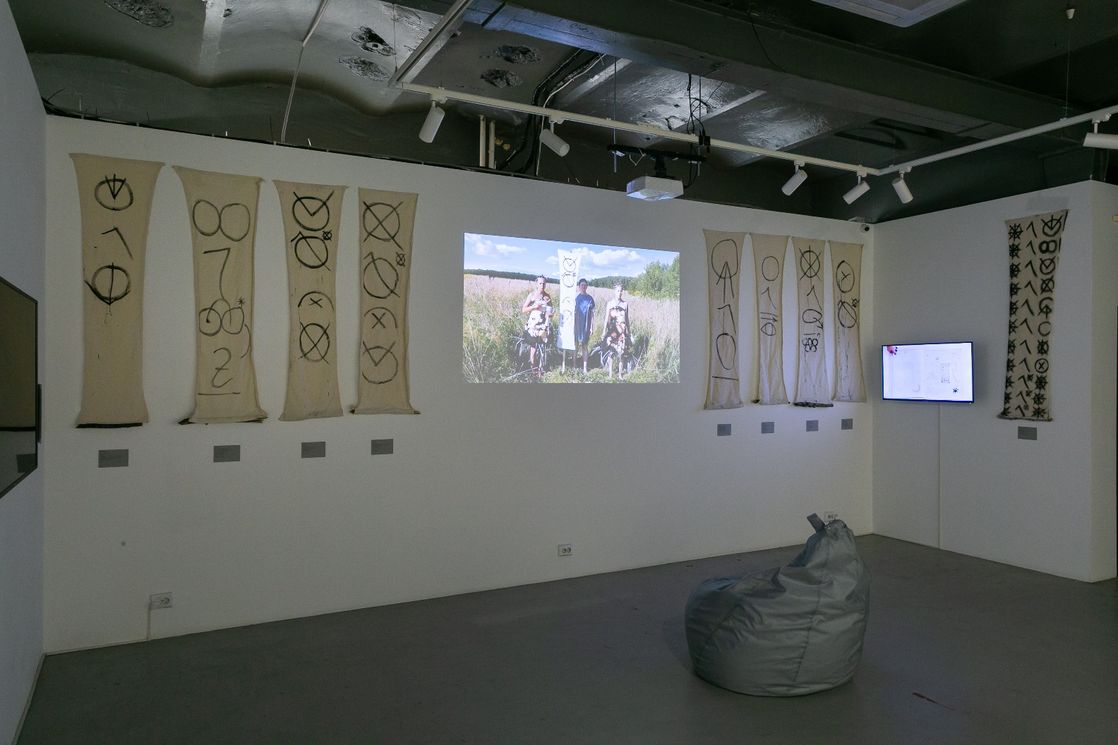 ‘My work in creating the language of Everything Possible is at the very least an indicator that my current “now” has conquered everything that was a problem for me before. For the entire time I was a student at the School of Art and Design, I was tormented by the fact that I couldn’t structure anything; I always ended up in a state of chaos. For my diploma, I set myself the task of putting an end to this. And it seemed to me that it was the creation of my own language and a large-scale demonstration of this phenomenon that would help me, at least temporarily, to perceive my art and the world as a kind of structure.’ 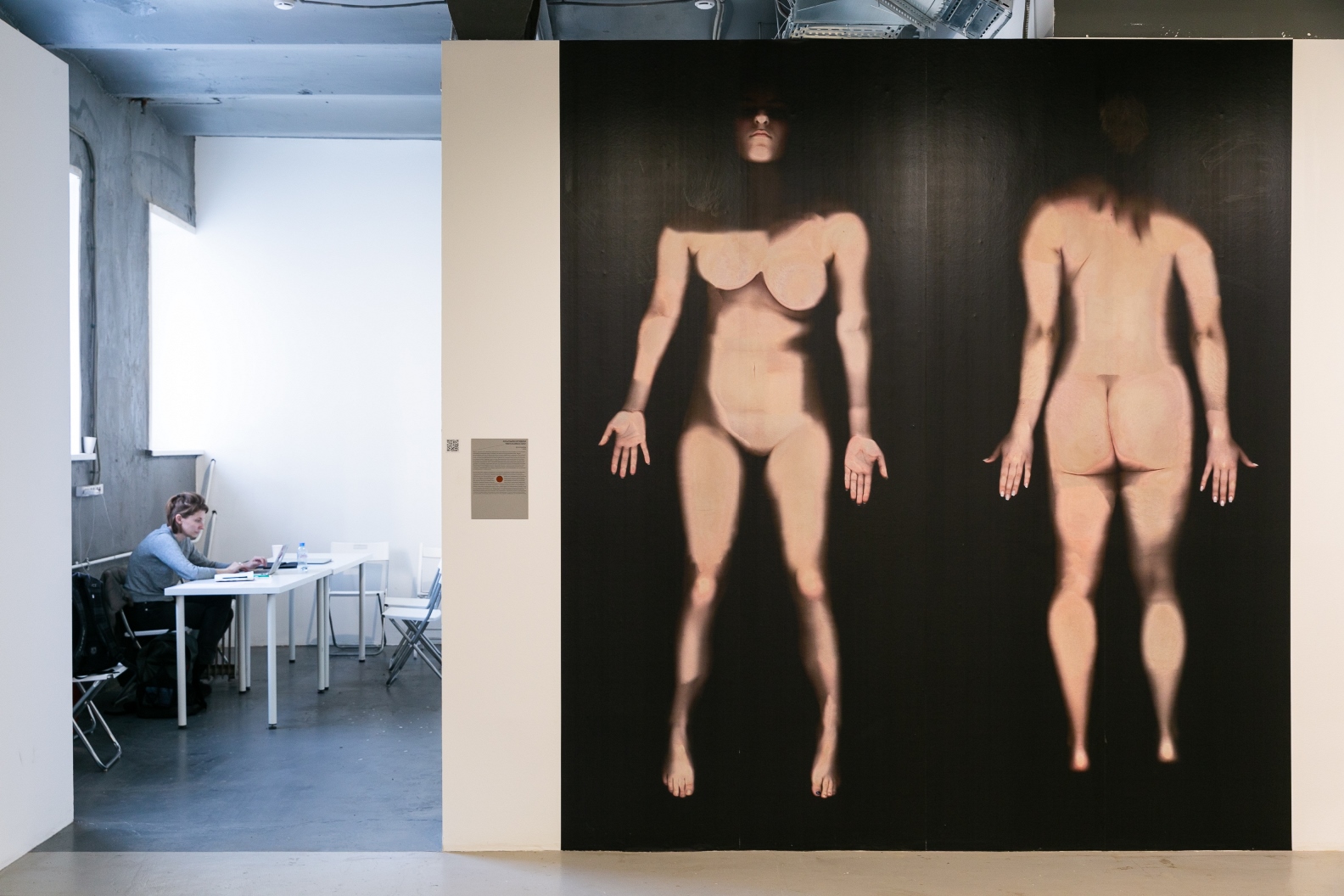 ‘Bodies adjust to changes in our world, where there is no longer any concept of stability. They become more flexible and lose their permanent shape. Distorted shapes of bodies are becoming a new norm for us.’

‘In my work, I tried to express that most people now live in the framework of the Soviet legacy, without thinking about it. Despite the fact that the Soviet Era is long over, some young people are now beginning to take an interest in objects of the past and are trying to give them a new life and keep them in their homes.

‘My work is a reflection of the current situation in Russia. Often things of the past can be found in modern interiors, yet people do not always understand what meaning is given to these objects of a bygone era. Therefore, I decided to deconstruct things of the past and present, creating sculptures from their parts. The idea to write on my objects originally came from the space in which I created them, where the walls were painted by different people. Thus, thanks to the texts that linked objects to specific events, my installation turned into a “sculptural quarantine diary”.’ 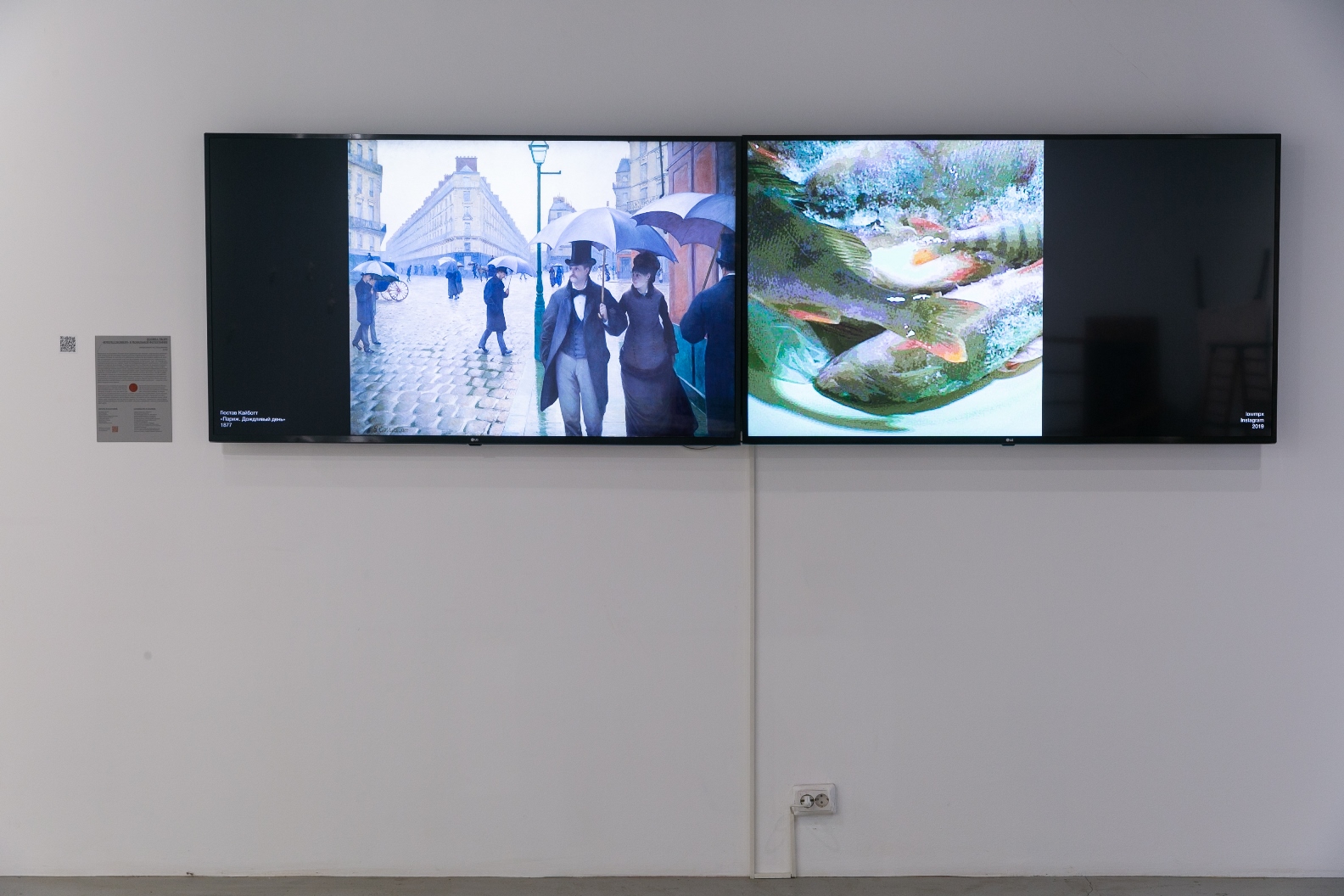 ‘This project is the result of a manual, subjective search for intersections between photographs by different authors working with mobile lo-fi photography and French impressionist paintings. The selected photographers are united not only by the style and texture of their images, but also by their motives and subjects. They pay a lot of attention to nature and capturing everyday life, which allowed them to find intersections with the works of the Impressionists. It was a great discovery for me that for some photographs you could literally find a “twin brother” Impressionist painting.’ 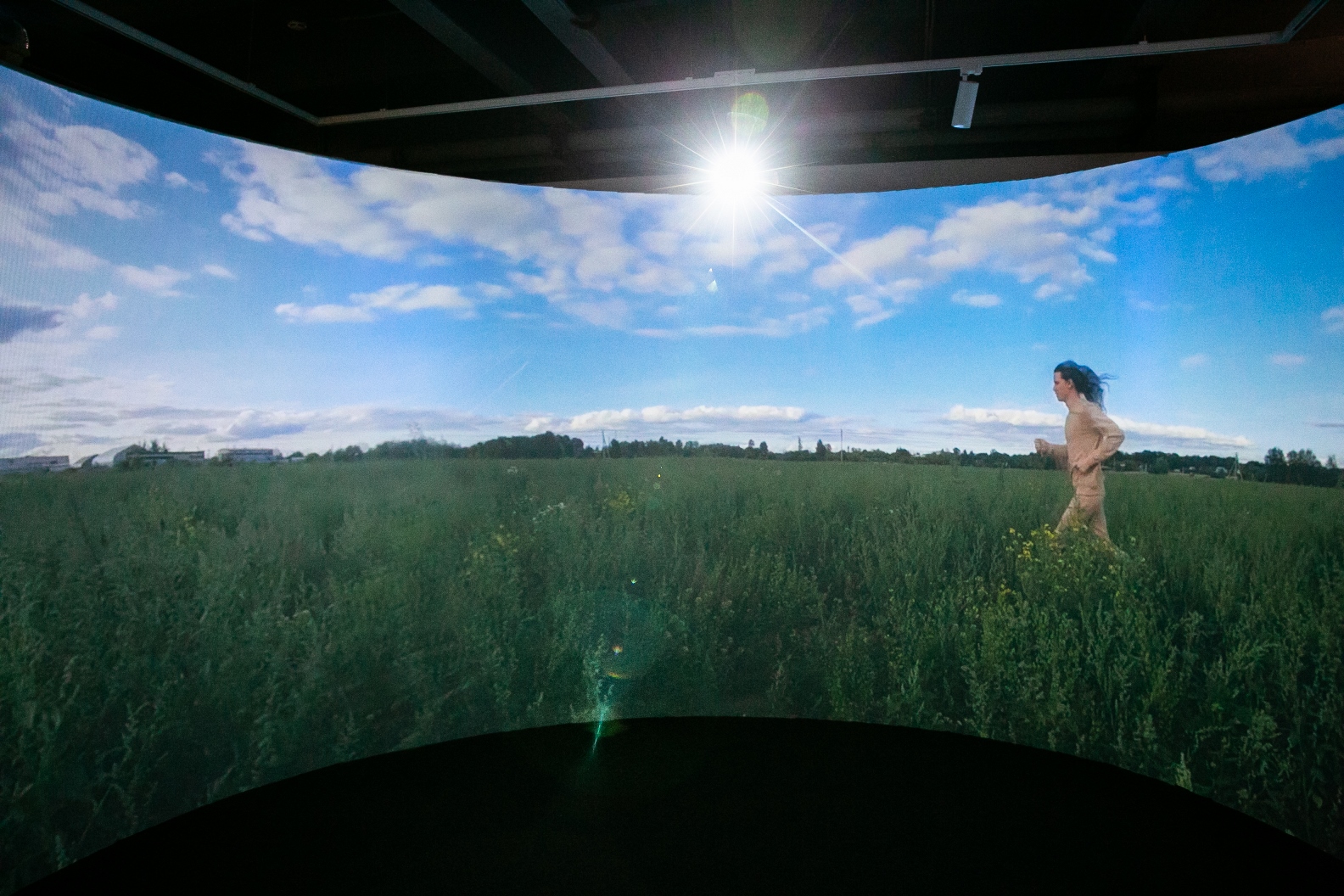 ‘My project started with my interest in the work of various artists who work with space—particularly, land art. I found it interesting that some of the most famous land artists in the United States, such as Robert Smithson, Michael Heizer, and Walter de Maria, strive for gigantism, and even in a certain sense have a violent attitude towards the earth. On the contrary, the most prominent representatives of land art from Great Britain—Richard Long, Hamish Fulton and Andy Goldsworthy—have a very tender and reverent attitude towards space and nature. Probably, in many respects, such different approaches were influenced by the colonial past of these countries. Russia and the post-Soviet space can be called a self-colonizing country. And the approach to our land corresponds not only to art, but also to politics. One can recall the geoglyphs made from trees, which conveyed their despondence even to outer space.

‘My graduation project is an attempt to move away from the violent treatment of land, to cause minimal damage, which is a step.’

Alina Zolotykh, SECOND SKIN YOU ARE IN

‘It seems to me that right now we are ourselves, but very flexible and changeable. We subtly feel the space around us, as well as changes, and we quickly react to them. We are becoming more open to the perception and acceptance of something different from us. We began to look more broadly at the world, and, most importantly, at ourselves.

‘The SECOND SKIN YOU ARE IN project is one of the possible scenarios reflecting the new norms of beauty, fashion, and the existence of the human body in the reality of tomorrow that has not yet been revealed to us. By creating masks, corsets and other wearable objects made of porcelain, the artist seeks to illustrate the image of a person in a borderline state—not yet completely abandoning the aesthetic norms accepted today, but already deformed by the tastes of the future.’

‘Right now, I am a person in a state of chronic anxiety. I worry about everything: about work, about health (my own and that of my relatives), and about the political situation in my country and in neighboring countries. I take everything in, I take everything to heart. I am also an artist who tries to reflect on her feelings and experiences in her art, find a way out for the negative, and create a space where you don’t have to think about anything and can put things aside.

‘I love yellow. I believe in its therapeutic properties; it gives people a feeling of warmth and joy. In my art, I use yellow for this very purpose. In today's world, people sorely lack a sense of security. We all need a pause, a stop. I would like to return to childhood, where there are no worries, responsibilities and problems. With my installation, I invite viewers to feel like kids, to play, make mistakes, but become creators of a unique abstraction. To feel like they are more than just a spectator.’

The NOW exhibition will run at the HSE ART GALLERY until October 11. Due to the pandemic, visitors must first register online for free before visiting the museum.

At Arch Moscow 2020, master’s students of the HSE Art and Design School won the student project competition in the category ‘Best Architectural and Planning Solution’. In the competition, participants had to conduct a comprehensive analysis of Yauza River bank territories and propose a project for their redevelopment.