‘Thanks to This Project, I Learned That if Something Doesn’t Work Out, I Need to Roll Up My Sleeves and Work on It Some More’ 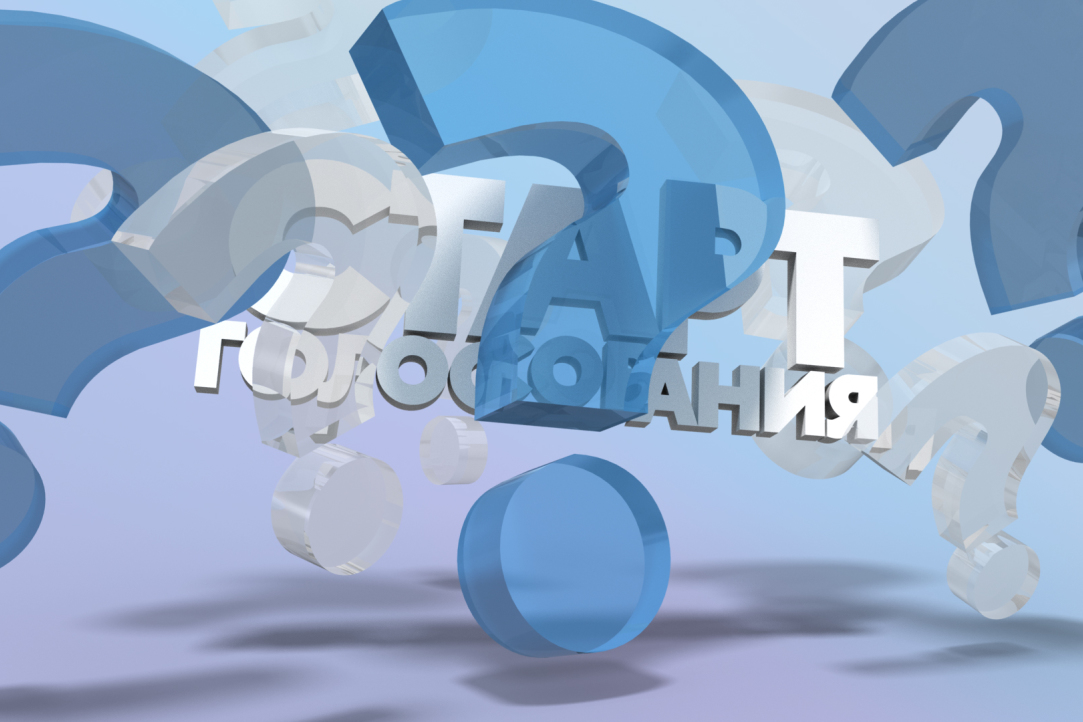 The brand design competition for the Cultural Centre at HSE’s Pokrovka complex, which started at HSE University on October 9, 2019, has entered its final stage. In the summer of 2020, the jury selected three projects for the final round, and now HSE University students and staff can vote for the winner. The finalists told HSE News Service about work on the projects and the philosophy of their brand. 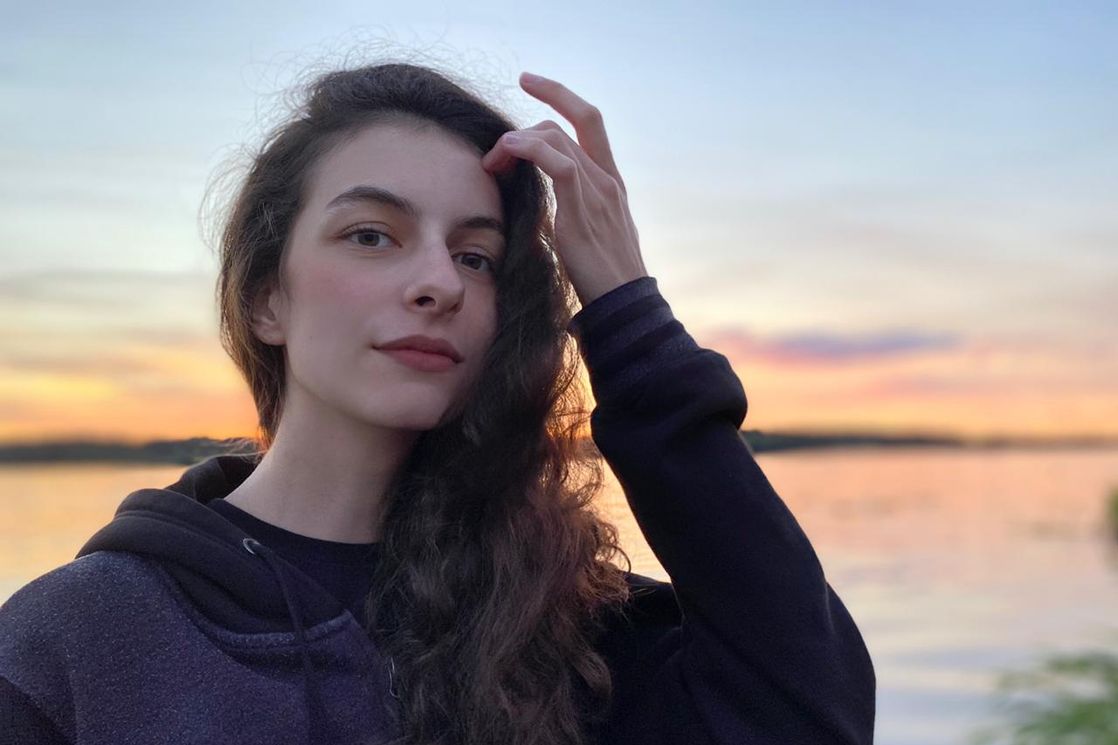 The decision to participate in the competition was the result of a series of coincidences and spontaneous ideas — I thought long and hard about the possibilities of trying out a field that was something new and completely different from my area of specialization. And news of the competition pushed me to stop thinking and finally start doing something. I’d never done branding, and my linguistic education never involved any kind of related activity, so I chose the only position that I thought didn’t require some specialist professional background (and in which I could at least in theory complete the test). The stars aligned for me - I was selected as an account manager. It is funny that, in completing the test task, I googled literally everything: what is an account manager, and what is a ‘text-script’? But when we started working with the team, it became clear that I didn’t need any scripts, and the account manager actually does completely different things. 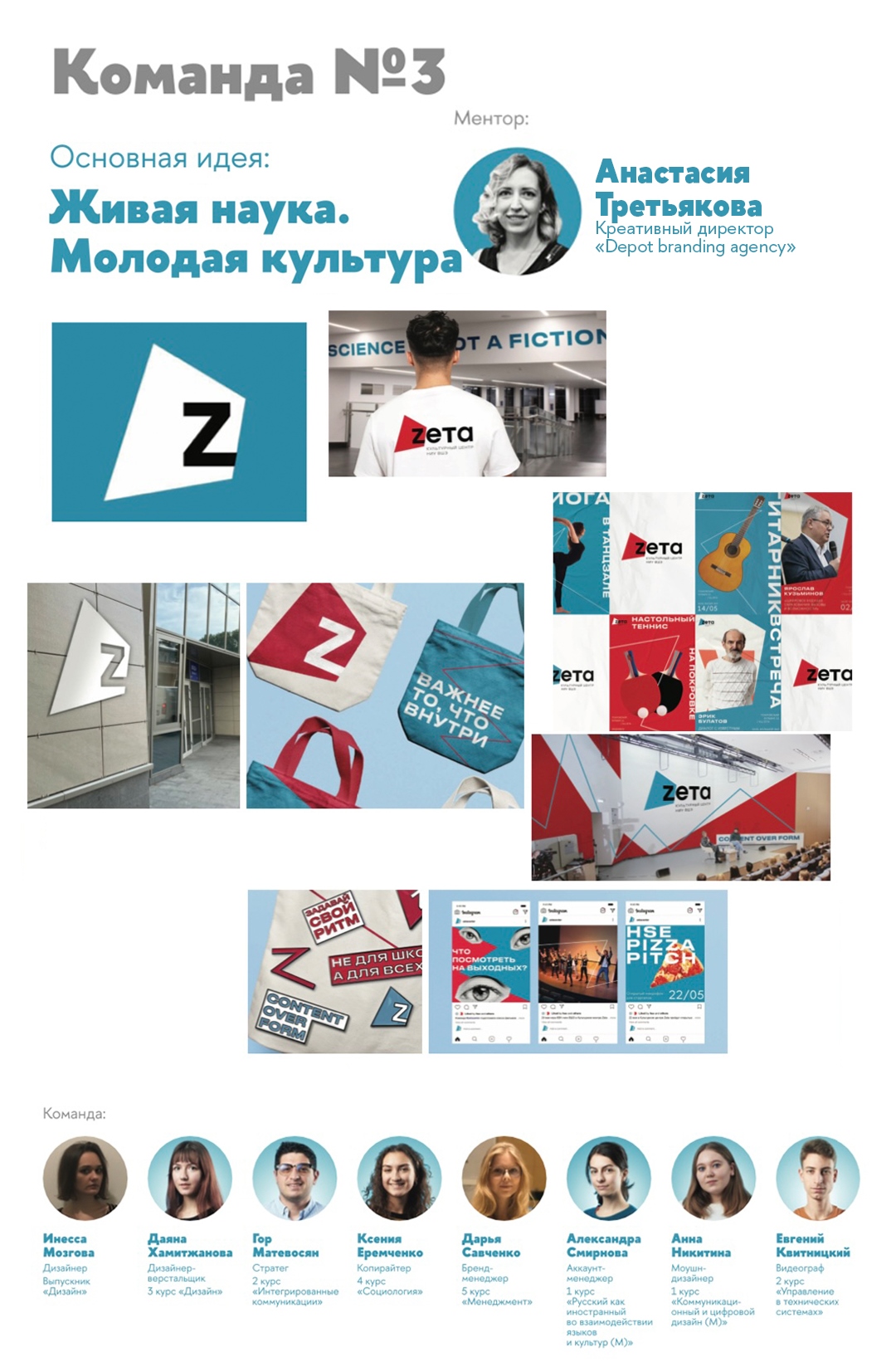 As it turned out, my role obliged me to be, in fact, the only member of the team who was deeply involved in the process of developing the brand non-stop. Whereas the rest of the team’s activities peaked at different stages (initially the main load was on the strategist, then the designers, and at the very end - on the videographer), my involvement was off the scale from start to finish. But I’m very grateful to the entire team for the fact that, despite the formal separation of stages, we all worked together: brainstorming, coming up with ideas, arguing, choosing, searching, discussing, proposing... My job was just to organise it; which I did. Planning meetings with our mentor, taking into account the schedules of all the team members; attending coordination meetings with mentors, where they discussed their vision of the Cultural Centre with HSE University administration, recording information and relaying it back to the team; monitoring the deadlines and pushing everyone; where people’s tasks were overdue I involved other members of the team to help them catch up, and on occasions I fixed something myself, finished it up, corrected it.

We wanted to create a bright, memorable and, above all, living brand that could be transformed according to the evolving needs of HSE University, while remaining recognisable

We wanted to design a brand that reflected the pulse of student life, its diversity and contradictions. At the same time, we wanted to place it as carefully as possible in the environment that had already developed around the Cultural Centre, without resorting to radical changes. Having realised all this, we pieced together Zeta — a brand that unites and communicates our values like a puzzle: freedom, culture, progressiveness, enthusiasm and initiative. In this endeavour we are all young, free, cool, very different, but very friendly: we combine things that are incompatible at first sight, and we are always open to something new. That is why our main slogan is ‘Living Science / Young Culture’.

While working on the project I became acquainted with a lot of useful management resources, which I have been using constantly since then. But I consider the experience I gained to be the main value: teamwork, managerial work, brand creation, communicating with our mentor, and negotiations. I learned first-hand how a brand is created and what happens outside the walls of a branding agency. It was very interesting, useful and amazing. I noticed that being in the competition liberated me and instilled a greater sense of self-confidence, gave me new friends and warm memories. Also, ever since I finished my work on the brand, I now routinely, in any activity, unconsciously assume the role of that same manager – and I see that as a good thing.

Most of all, of course, I enjoyed working with the team. We’re all very well matched, active, and motivated. The most interesting aspect was the process of developing the brand identity, where you invent the brand from scratch, including its mood and character.

It was also great fun making the video — we did it in the middle of the lockdown, and we shot all the footage ourselves on our phones, under the supervision of a videographer, who Facetimed everyone and explained how to move the camera and what to do.

The competition for developing the Cultural Centre brand was attended by undergraduates in their second year and above: they worked under the supervision of leading specialists of professional companies, members of the Association of Branding Companies of Russia and outstanding practitioners. Of the eight teams of eight people, three made it to the final vote, representing the Yard, Zeta and Centre of Cultures brands.

I applied to participate as a copywriter in the competition: I considered it ambitious to participate in the creation of such a large HSE University project, to express in words a structurally complicated idea in a way that was clear and engaging to both jury members and branding professionals, as well as students and HSE University administration. 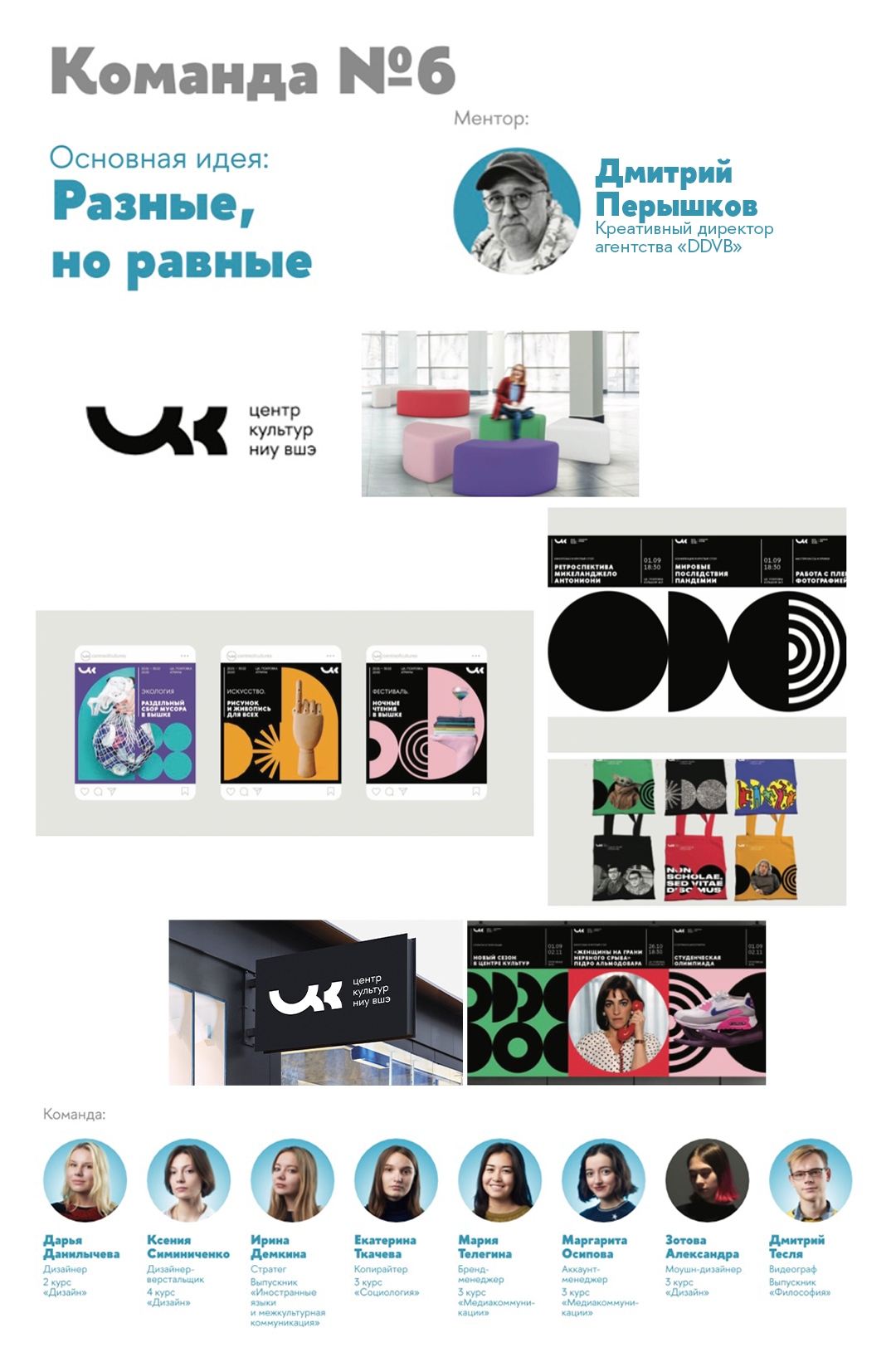 Our goal was not simply to come up with a set of visually attractive symbolic images or to come up with a striking name. We wanted to create a brand that was meaningful and close to every student. During one of the first brainstorms, we realised that culture was something elusive, and it was impossible to define it unambiguously. That said, the Centre of Cultures is a platform that can unite people with completely different understandings of the term. Having considered this, we decided that culture is, first and foremost, a culture of communication, because only through communication can it evolve and acquire new forms. This interpretation suited us, and we started developing the idea. And that’s where the hardest part started: we had to convey this message to our audience through a logo, name, and presentation. It was important to bear in mind, however, that it should be easy to perceive, relevant, and have the potential for development and reflection in varying formats.

We determined that the Centre of Cultures (CC) should be framed as a place that brings together different cultures. We started developing this concept and came up with a circle as a symbol of equality and openness: it was to form the basis of the logo. We subsequently added a ligature, a link between the Cultural Centre and the of HSE University symbol

We chose the name for the following reasons: it does not confuse students who are accustomed to the Cultural Centre and perfectly reflects the positioning of the brand. There were concerns about the abbreviation (CC), but branding still requires courage and it was decided to take a risk. After all, if we are creating a space in which everyone can offer a new interpretation of any cultural phenomenon, why not start with ourselves?

Of course, working on such a real, serious project is a challenging task that is far from simple. I was definitely lucky to end up with the team and mentor that I did—our mentor was Dmitry Peryshkov, an amazing teacher and great professional. I still remember how we would meet several times a week in cosy auditoriums at Pokrovka and discuss options for concepts for long periods. It took at least a month for us just to realise how important the idea of equality and openness is to us and to all the students of HSE University, and then we persistently tried to translate this into words and give it an identity. I am delighted with the synergy that my work with talented people has brought about, and by the fact that we have managed to accomplish a task that at first seemed impossible.

Thanks to this project, I learned that if something doesn’t work out, you have to roll up your sleeves and work on it some more. You must do this until you have achieved the desired result. I learned to fit as much sense as possible in every word, and would rewrite the same phrase at least a dozen different ways, until it really reflected the idea. I have become more relaxed about editing. The most important realisation, of course, has been the fact that a brand is not only a logo and a few recognisable phrases, but a system, a set of values and meanings. 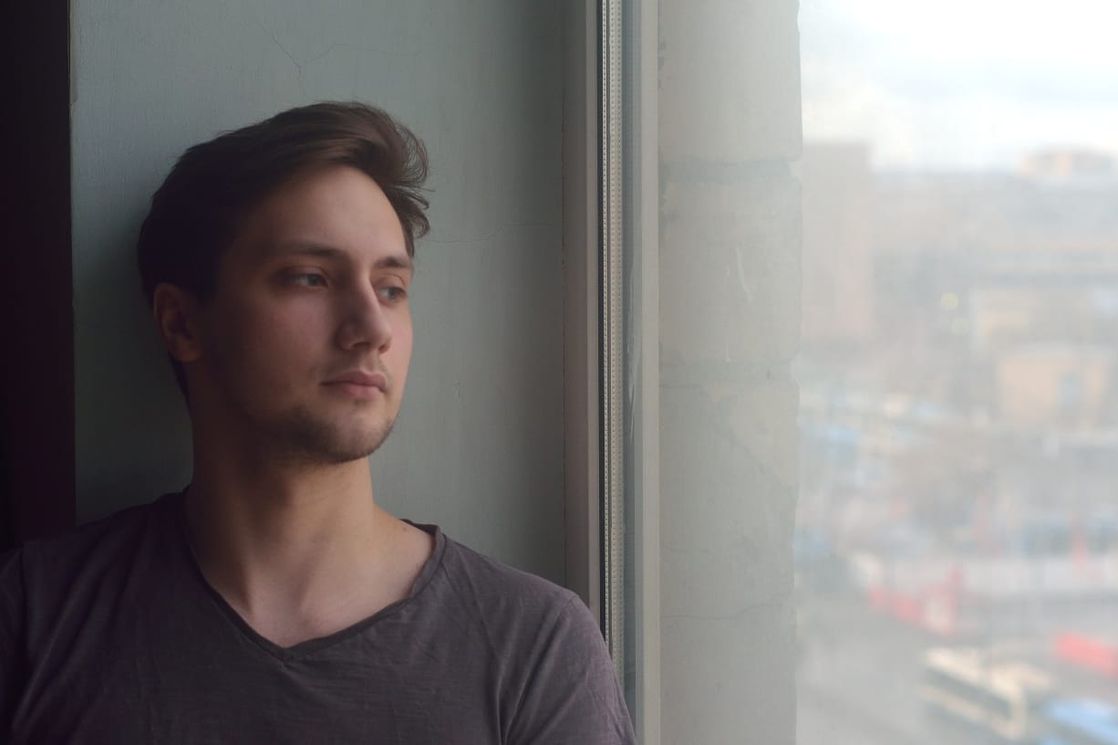 I became interested in participating in the Cultural Centre brand development competition because the teams needed motion designers: I just wanted to do it more seriously. I applied, did a small test task and was selected. We were randomly assigned to teams at the start of the competition: I was put on Denis’s team.

We have a versatile team: there are students from the Faculty of Social Sciences, MIEM HSE (HSE Tikhonov Moscow Institute of Electronics and Mathematics), my own faculty. We are all different, and everyone has their own ideas about life in general and what the Cultural Centre brand in particular should look like. It’s this versatility, in my view, that helped us become competition finalists

According to the brief, we had to expand the potential target audience of the Cultural Centre as much as possible: to make it an attractive place not only for the HSE University community, but for all Moscow residents, a meeting place for completely different types of people, and one that will create a great synergy of its own. Our team came up with Yard: probably the brightest (if we are talking about the visual component), and, it seems to me, we have the most appropriate brand philosophy for the brief. 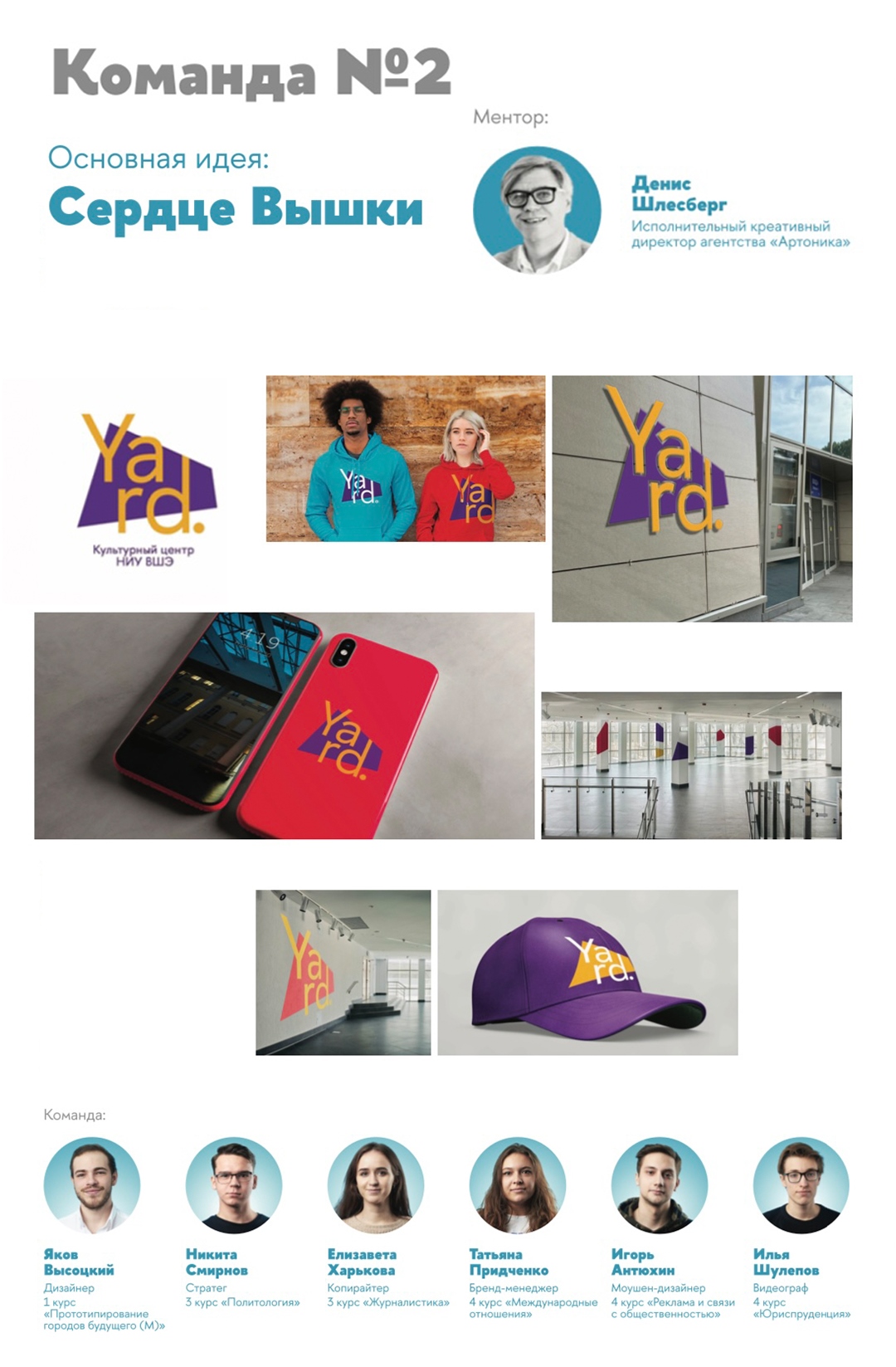 We did everything from scratch: we starting by working out the idea and analysing the audience and its aspirations, after which we realised what our development path was. Everything was created through a democratic, considered method: we discussed every idea, analysing them one by one, and ended up with a mix of everything. By improving and making changes to the idea, we arrived at the design and philosophy of the brand: what it represents, the ideas it contains, the message it conveys. So we moved from the visual exterior of the brand to its internal qualities.

Since motion design was required at the last stage of the work and played no fundamental role, I assumed the responsibilities of an account manager with organisational tasks (assembling a team, scheduling meetings, etc.). Working as an account manager gave me a more complete picture of this position. I also realised that it is not so easy to manage and organise—to put together a team. It is not enough to dictate the plan, because everyone has their own wishes, and you must take them into account to reach a compromise, to negotiate, discuss, explain.

You need individual communication with each member of the team, because you can’t leave anyone behind: that will affect the overall performance

While working on the project, my teamwork skills, which we develop during seminars and workshops at HSE University, as well as the ability to present myself and my ‘baby’ helped me a lot. Furthermore, the topic of branding relates to my degree programme ‘Advertising and Public Relations’, so I had a rough idea of what we should do and how. Based on my three years of study, I sometimes shared my ideas and solutions as Denis’s second in command.