Boris Akunin: A Real History - In the Footsteps of Karamzin

On the 19th of March at a meeting organised by the HSE and the Liberal Mission Foundation in the series “More important than politics”, the writer Grigory Chkhartishvili, better known as Boris Akunin, author of the world famous novels about Russian detective Erast Fandorin, disclosed his ambitious new project to write a history of the Russian state.

When the literary critic Dmitri Bak, who was chairing the meeting, presented his guest, he recalled that when all of Moscow was chattering about who might be the mystery author of the Fandorin books, a well known newspaper compiled a list of the candidates who might be using the pseudonym Boris Akunin and his name, not Chkhartishvili’s was at the top.

The meeting at the HSE Cultural Centre had been headlined, “Intelligent reading: domain of a select few or essential for lots of us?”, but Chkhartishvili’s announcement, that he is realising his long cherished idea to write a history of the Russian state from Kievan Rus to 1917, led the discussion away from literature and literary tastes.

Chkhartishvili anticipated the flurry of questions from admirers. He explained that in his view, history should be available to readers not only in text books aimed at students and researchers but also in attractive books written in language accessible to all which could make readers hungry to know more about their country’s history.

Chkhartishvili said his guiding principle will be an impartial and objective approach. He will be as accurate as possible in presenting facts, and keep all ideology at arms length. He has chosen not to include the events after 1917 as avoiding a subjective view of them is impossible.

The author of the Fandorin books quoted the 19th century writer and conservative historian Nikolai Karamzin who wrote “A History of the State of Russia”; “Even the meekest citizen should read history. It will reconcile him to the imperfection he sees around him, as a phenomenon common to every age, it will calm him about the misfortunes of the state, bearing witness that similar troubles and far worse, have arisen before, and the state did not collapse. It will nourish his sense of morality and righteously make him desirous of justice, which affirms our happiness and harmony in society.”  Chkhartishvili would like to see himself as following in the footsteps of Karamzin in this grand new project.

The plan is to publish the “History” in eight volumes, the first is already written and due to see the light this year. All the books will have full-colour illustrations to allow the reader to submerge themselves entirely in the events of the past.

The writer “Akunin” will have to keep his imagination on a tight rein for this endeavour, but he has found a way to give it full flow in a parallel addition to each tome in the form of a fictional account of events, and these fictional accounts will combine into an unbroken history in one series. 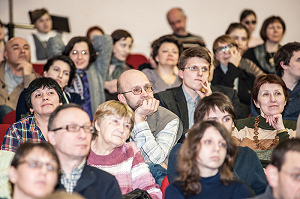 The audience, was intrigued and showered Chkhartishvili with questions about his view of Russian history, about being a writer, his relations with the reading public...In response he mentioned in particular that “Boris Akunin” is not his only literary disguise, that he also uses the pseudonyms Anna Borisova and Anatoly Brusnikin, and that changing his name is one way of communicating with his readers. It allows him to wear a different hat without betraying the expectations of his fans and to experiment creatively.

Students, HSE teachers, academics and writers all joined in the discussion. In a question about the role of the individual in history, Chkhartishvili said that even such a remarkable figure as Vladimir Monomakh [a grand prince of Rus who played an important role in the development of Russia in the middle ages, venerated for his bravery and wisdom] couldn’t change the course of history, he could only delay it for a while. In his view, individuals can play an important part but they do not have the power to change the order of things whatever role they might play in the life of the state.

To round up the discussion, HSE Academic Supervisor Yevgeny Yasin said that it’s important to popularize and disseminate knowledge of history and he wished Grigory Chkhartishvili success in his ambitious enterprise.

Article by Viktoria Nosik, second year student at the faculty for Media communications and intern at the HSE news portal.

Exploring Eurasian Sovereignty through the Lens of Kazan

On Monday, March 19, Jane Burbank, Professor of History and Russian and Slavic Studies at New York University, delivered a lecture entitled ‘Eurasian Sovereignty: The Case of Kazan’ at the Department of History and the Centre for Historical Research at HSE St. Petersburg.

HSE Develops Mobile App Based on Tolstoy’s War and Peace

HSE’s School of Linguistics, along with Samsung and the Leo Tolstoy State Museum, has developed a mobile application called ‘Living Pages,’ which offers users a new way of reading Leo Tolstoy’s novel War and Peace. The programme’s launch coincides with the Russia’s Year of Literature.

Professor Explores Links between Literature, Landscape and the Natural World

On May 15, Dr James Canton of the University of Essex will deliver a lecture at HSE on ‘Wild Writing’, a form of literature that emerged in the mid-twentieth century as a novel way of understanding the urban landscape and nature. The author of numerous publications focused primarily on British travel writing in Arabia, Dr Canton’s lecture will focus on a discussion of local Essex landscapes.