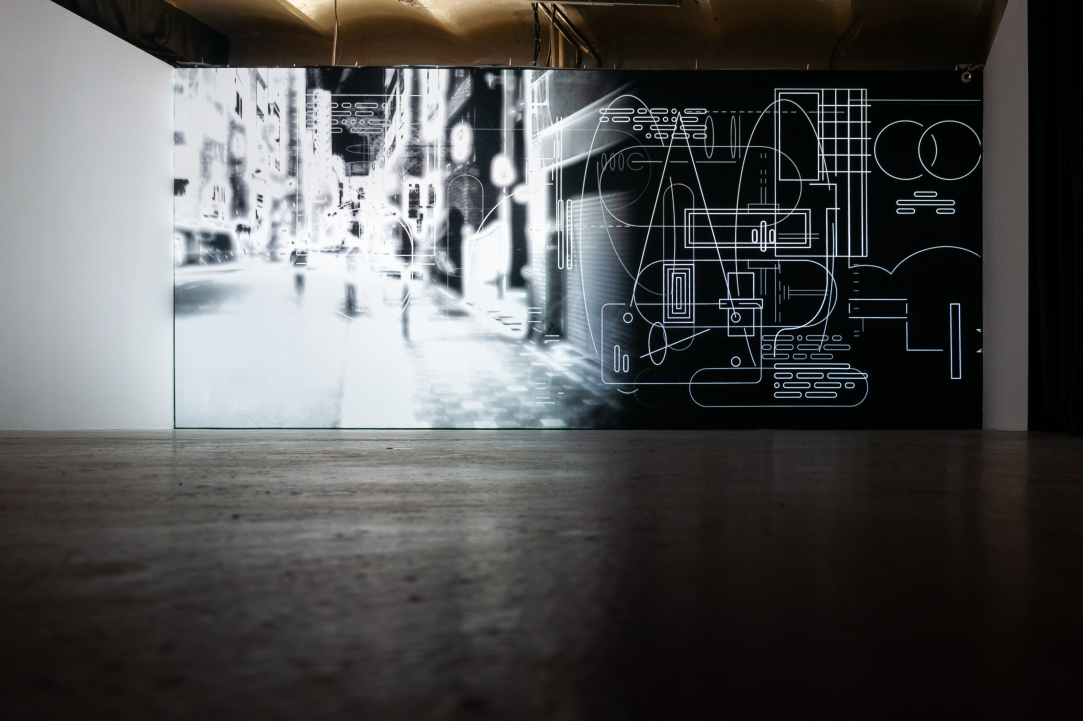 ‘The practices of Protey Temen can be described as a visual premonition of a world that has perceived itself anew after large-scale info-social changes,’ say the exhibition organizers. ‘The artist interacts with the general information field as a conductor and recorder of events that have not yet been named and included in the classical picture of reality.’ Protey deliberately avoids the exact naming of the processes he depicts. The proper terminology does not exist yet — these phenomena have not yet occurred or will never occur.

Protey Temen is an interdisciplinary artist, co-founder of HSE Art and Design School, and co-founder and visual director of the Endel technology startup. He creates graphics, objects, videos, and installations. Protey Temen lives and works in Berlin and has participated in more than a hundred worldwide exhibitions in Moscow, New York, Amsterdam, Barcelona, Berlin, London, Venice, Verona, etc. His works can be found in the collections of the Moscow Museum of Modern Art, the Russian State Library, and in the hands of private collectors.

In ‘A Delicate Fractal’, Protey Temen pictures our future, in which large-scale changes occurred a long time ago and the consequences of which are now considered normal. The first hall of the exhibition represents a workroom from the ‘past’ of science (that is, our present), an archaic cradle of the consciousness of a scientist who does not know where he is moving, but feels the calling of this movement. The audience see this space through the eyes of a modern man — as a cabinet of curiosities, recreated from fragmentary knowledge about the history of science.

The chalkboard here represents something between a living being and a fossil, it’s not just a tool for obtaining and transmitting knowledge. Measuring instruments made of paper resemble dozens of mechanisms at once: you can’t determine their functions — they are either already forgotten, or not yet known.

The formulas and diagrams on the shelves are difficult to decipher, but belong to a world where the main goal is to deepen knowledge and transfer it from one person to another. This knowledge is tactile and sentimental, it is tied to the physical world, to the emotional and naive consciousness of a person of our time.

‘Yulia Yusma, the curator of the exhibition, and I have been discussing the ‘Inner School of Open Studies’ for many years, and in the most natural way these conversations turned into an exhibition,’ says Protey Temen. ‘The most important part of all the halls was the consolidation of two topics - from the workroom to the supercomputer - through the concept of "information" and how we, people, use it, while creating and processing culture.’

The central work of the exhibition is the ‘Ocean of Memory’, a generative media installation assembled from hundreds of segments of videos, sounds and texts. The stele in the centre of the last hall resembles an information panel. ‘It reminds us of what our nature looked like before the advent of the high-tech synergistic age that became part of the global consciousness. It’s an open question as to who needs this lonely landmark,’ the organizers of the exhibition explain. ‘Nobody knows whether there will be eyes and minds in the future that will need regulatory tools in the form of science, art, philosophy and other social institutions, and whether there will be any place for a person in this world at all.’

A few years ago, Protey Temen described himself as a Russian artist of the first wave of digital globalization and his identity has not changed: ‘This is part of the history of development and transition from classical mediums in culture and art to digital ones. What seems routine now was just emerging back then. Paradoxically, now I have a new feeling of pleasant slight nostalgia, as if it was an old friend who had gone somewhere for a long time, but with whom I spent an interesting time.’