Boris Gasparov — Doctor of Philology, professor and author of over 100 articles on Russian and general linguistics, literary theory, Russian literature and musicology. He taught at the University of Tartu in Estonia and at Stanford, California after emigrating to the US (1981-1983), and has been at Columbia University in New York since 1993.

It isn’t so important these days how much you learn in school. What we need is talented people who can organise international exchanges. I don’t want students who are ready to make themselves into clones of me. I want students I can talk to, discuss certain ideas and work with.

First we’ll study Russian literature in a global context. There will be lots of the main Russian literature course and parallel courses in foreign literature but not in the way it’s usually done in philology degree programmes. In the first year there will be four courses on world genres, epic, drama, poetry and the novel in world literature but not in chronological order. This is something we designed ourselves. I will teach epic and the novel. In the epic course we’ll look at Homer, The Eastern Slavic Tale of Igor’s Campaign (the source for Borodin’s Prince Igor) and Wagner’s The Ring, Brodsky’s Biblical poems and the Finnish folk epic Kalevala.The purpose is to show the intonation, the psychology of an ethnic group, what the intonation of epic narrative is about.

I don’t want students who are ready to make themselves into clones of me. I want students I can talk to, discuss certain ideas and work with

We’ll look at the general features of a genre. For example, there is always something not right with an epic hero: a flaw in his character, or a passion which makes him an epic hero but also vulnerable.  Achilles is the first example. Epic is also insanely brave with narrative chronology. It goes against the popular cliche that epic is fixed like a monument on the square with an outstretched hand.

I envisage my students graduating from this course as young people who respond with agility to the voice of contemporary culture, are able to read cultural texts in many ways, in contemporary journalism, the media, online, teaching literature or social research. I want to teach them this agility so that when they encounter the avalanche of new impressions which is constantly coming towards them, they will feel ready to work with them and dive right into the heart of the turbulent mass of culture and I want them to have enough knowledge to recognize the similarities and differences between the huge variety of phenomena.

I think these skills could be very much in demand. It goes without saying they’ll be useful for academic work, but only a few of my students will become researchers. For teaching literature and culture, they’re essential. Also for journalism and all the different stages of media from research, to production and analysis. I’m not enamoured of what is going on in the media and the direction it has taken. I visit Russia frequently and I am worried by the current moral and cultural atmosphere. But I know that things change and Russia is capable of changing fast. I do believe that. 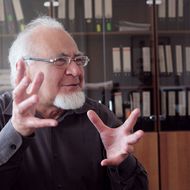