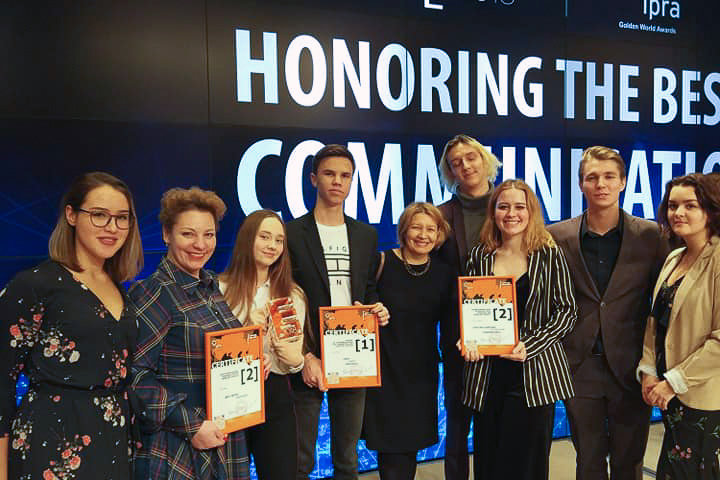 The project ‘Twelve Labours of a PR Expert’, a career guidance event for school students in a game format, which was prepared by students of the programme ‘Advertising and PR’, took second place in the ‘Creative campaign of the year’ category in the ‘Youth projects’ section. Each ‘labour’ represents a PR expert’s competency. The game took place as part of the career guidance day for HSE Lyceum students, but the project founders are going to organize such games for other interested school students as well.

Organizers of the other student project, MuzVyshka, came third among the best youth PR campaigns. The MyzVyshka festival by Ingroup StS has been organized since 2003 and brings together the best HSE and alumni bands. This year, in addition to four youth bands, the anniversary MuzVyshka stage also featured Nervy, a popular band. The organizers managed to attract attention to the festival not only among HSE students, but also students of other Moscow universities. In 2013, Ingroup StS  won an Eventiada award, with their project ‘Night at the Cultural Centre’.

Two more HSE student projects made it onto the short-list, ‘Theatre Night’, also organized by the Advertising and PR students, was nominated in two categories: ‘Event of the year’ and ‘PR campaign’. And The Vyshka, a student media project, was recognised in the ‘Social media campaign’ category.

In addition to this, in the ‘Best event’ category for school students, the overall winner was ‘Donor Friday’, a project prepared by Junior School of Communications students at the School of Integrated Communications. This school is for high school students planning to apply for the Advertising and PR programme. Each year, the students prepare an end-of-year team project, and this year it supported blood donation activities.

The Eventiada IPRA Golden World Awards have been held since 2011 and are a regional partner of one of the world’s biggest PR awards, IPRA Golden World Awards. Awards are given to the best communication projects among corporations and non-profit organizations, as well as among university and school students. This year, applications from 13 countries were received. The awards ceremony took place on December 6th.

The news article was prepared by STUDLIFE HSE team.