70 Years on: Remembering Victory in WWII — A View of Post-war Life in the Soviet Union

In the year that marks the 70th anniversary of victory in the Second World War, we talk to Kristy Ironside, who received her BA and MA from the University of Toronto before going on to complete her PhD at the University of Chicago, and who is currently researching life in the Soviet Union in the post-war years. Kristy Ironside’s work examines what the War meant to ordinary people, how their lives changed — and how Soviet society coped with the aftermath.

— You joined The International Center for the History and Sociology of World War II and Its Consequences as a researcher last year. How did your cooperation with HSE start?

— I applied for a postdoctoral position and was fortunate enough to get it. I was attracted by the possibility to collaborate with well-known Russian historians working on the Second World War and Soviet history, in general, and by the opportunity to be near my archives in Moscow, as I revise my dissertation to turn it into a monograph.

— 2015 marks the 70th anniversary of victory in World War II. What are your plans and goals as a researcher at the Center for this year?

— Although I've researched and written about the war years, for my book, I focus more on the post-1945 period and the social and economic consequences of the war for ordinary citizens' living standards and the evolution of the communist project in the Soviet Union. Aside from collecting more archival materials and revising my existing dissertation materials for the book, I am also working on a side project about the bachelor tax, which was created by Khrushchev in 1941 to encourage people to have more children and replace the war dead. It was very unpopular because the consequences of the war made it difficult for citizens to have three children, the number below which one paid the tax. I am finishing up the archival research for this article at the Russian State Economic Archive in 2015.

I really like Moscow as a city: it's cosmopolitan, there are lots of things to see and do in your spare time. You feel very linked into an international network of scholarship here.

— What do you think young people know and feel about the World War II?

— I think younger people know less about the everyday difficulties of the war years as time goes on. Both my parents were born during the war, not in Russia but in Scotland, and they remember rationing as children.

— You've devoted quite a lot of time to researching Soviet history. Your PhD thesis was 'The Value of a Ruble: A Social History of Money in Postwar Soviet Russia, 1945-1964'. What was the main trigger that sparked your interest in Soviet history? Who were your teachers and mentors?

— I simply found Soviet history fascinating as an undergraduate. I have no family or other connection to Russian history. I suppose it was simple exposure: I went to the University of Toronto as for my BA and for my MA, where I was able to work with leading Soviet scholars, especially with Lynne Viola. For my PhD, I attended the University of Chicago, where I worked with Sheila Fitzpatrick, one of the leading Soviet historians, especially for social history. I was one of her last students before she retired.

— How is living and working in Moscow for an international expert? What's difficult and what is more positive?

— I really like Moscow as a city: it's cosmopolitan, there are lots of things to see and do in your spare time, and for me, as a Soviet historian, it's crucial to have access to Russian archives and libraries. The process of working through archival files is very slow, so having a year here is very helpful for my research. Sometimes I find the size and crowdedness of Moscow frustrating, but I feel the same way when I'm in New York. One really encouraging thing is the level of internationalization you feel at HSE: since September, we've had several well-known scholars come to give presentations. You feel very linked into an international network of scholarship here. 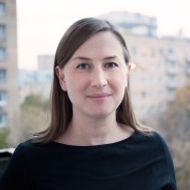