How Are Human Sciences and Sociology and the Humanities Related? The Debate Continues

The Poletayev Institute for Theoretical and Historical Studies in the Humanities (IGITI) held an international conference on 29-30 October 2015 on ‘Biological Concepts, Models, and Metaphors in Social and Human Sciences’. For two days, Russian, European and American researchers discussed the relations between social sciences and the humanities and various life sciences. This topic arises largely in the light of the recent boom in genetics, medicine and biology which have led academics to reconsider previous concepts of boundaries and connections between disciplines.

After the conference, Editor of HSE English News, Anna Chernyakhovskaya asked some of the speakers and participants to share their impressions. 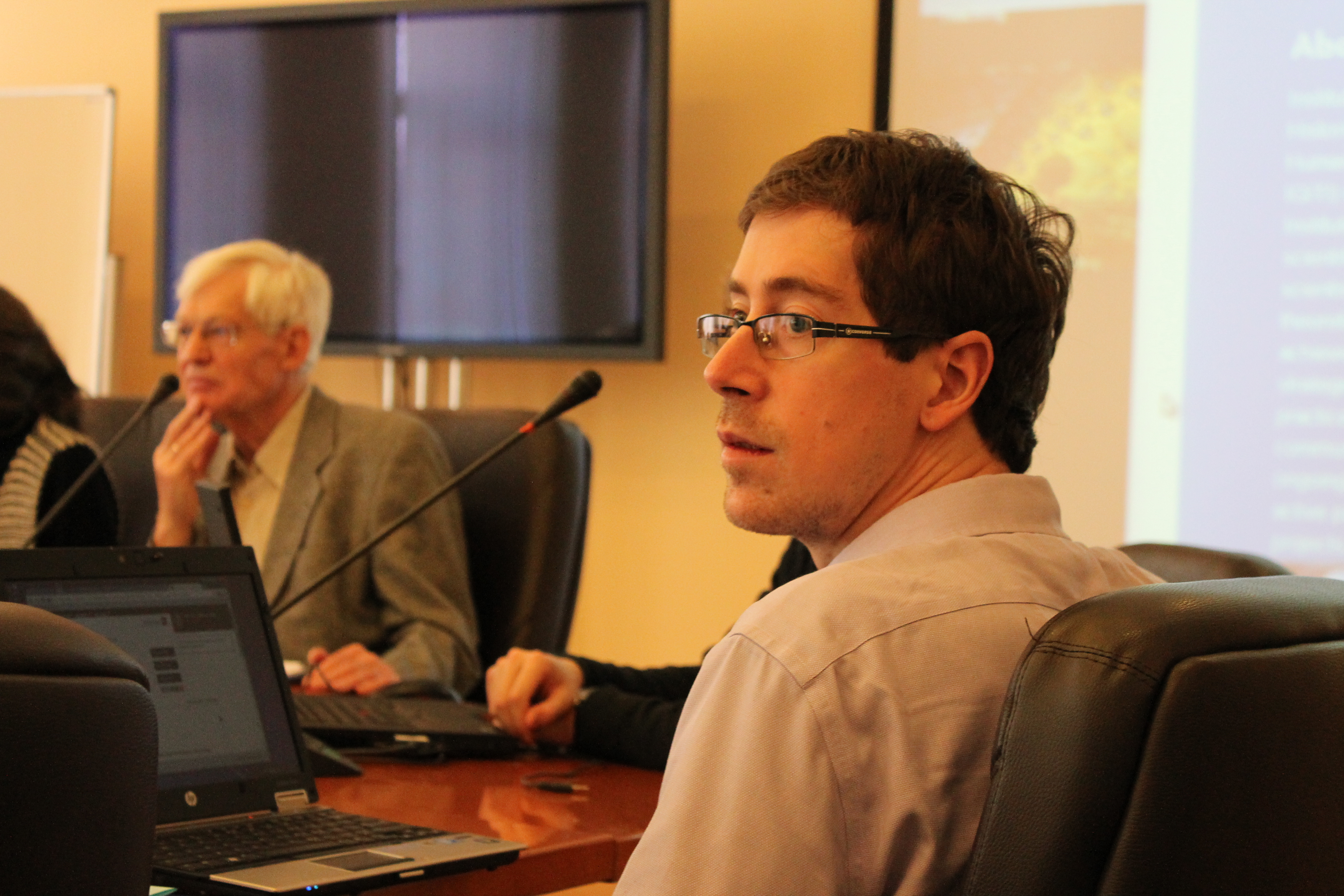 Christopher Donohue (National Genome Research Institute, Washington, USA), no stranger to IGITI, gave a talk at the conference on the Biosocial Anthropology of Robin Fox: Defining an Intellectual Community. In the interview, he explained what intellectual community is:

— My understanding of an ‘intellectual community’ is an attempt to better define those scientific inquires which are neither ‘mainstream’ nor “pseudo-scientific.” Intellectual communities come about through both the constitution and fragmentation of disciplines. I am not saying that mainstream sciences are monolithic, but communities more on the margins have specific features, I contend.

Heterodox scholars in an intellectual community whom are bound together by the following: common vocabularies and taxonomies, definitions and terms, application of similar methods to specific similar problems, a shared sense of origins and disciplinary history, a narrowly defined group of authors and co-authors, definable peer-review networks.  These intellectuals are challenged constantly by both marginal and central actors in the disciplines.  They are forced to police their boundaries consistently. They frequently found their own journals, reside at a few select institutions - they have distinctive patronage networks - and have very specific peer review standards.

Talking about his research interests, in connection with the topic of the conference, Christopher Donohue said:

— I am finishing a book which is a concept history of the term ‘social selection.’ In the late 19th century, French theorists (like Paul Broca) used this term to critique Darwin's understanding of human society and of human social evolution. They countered: Civilization did not evolve like nature; perhaps civilization was heading to decline, perhaps not.  In order to describe the dynamics of civilization and to determine how civilization introduced novel forces of selection upon individuals and groups, it was necessary to define a new term: social selection. This was used to describe in particular the origin and persistence of norms and customs in human societies. Social selection was used by theorists to help delineate and refine what was biological (and natural) and what was social, societal and civilizational.

I am also working on a book on a series of communities which sought to integrate biological models, methods and evidence, in particular, evolutionary theory and population genetics. One of these communities is discussed here. These  emerged in American intellectual life in reaction to relativism as an epistemology, to the perceived dominance of cultural anthropology and to behavioralism in the behavioral sciences- the idea of man as a ‘blank slate.’ 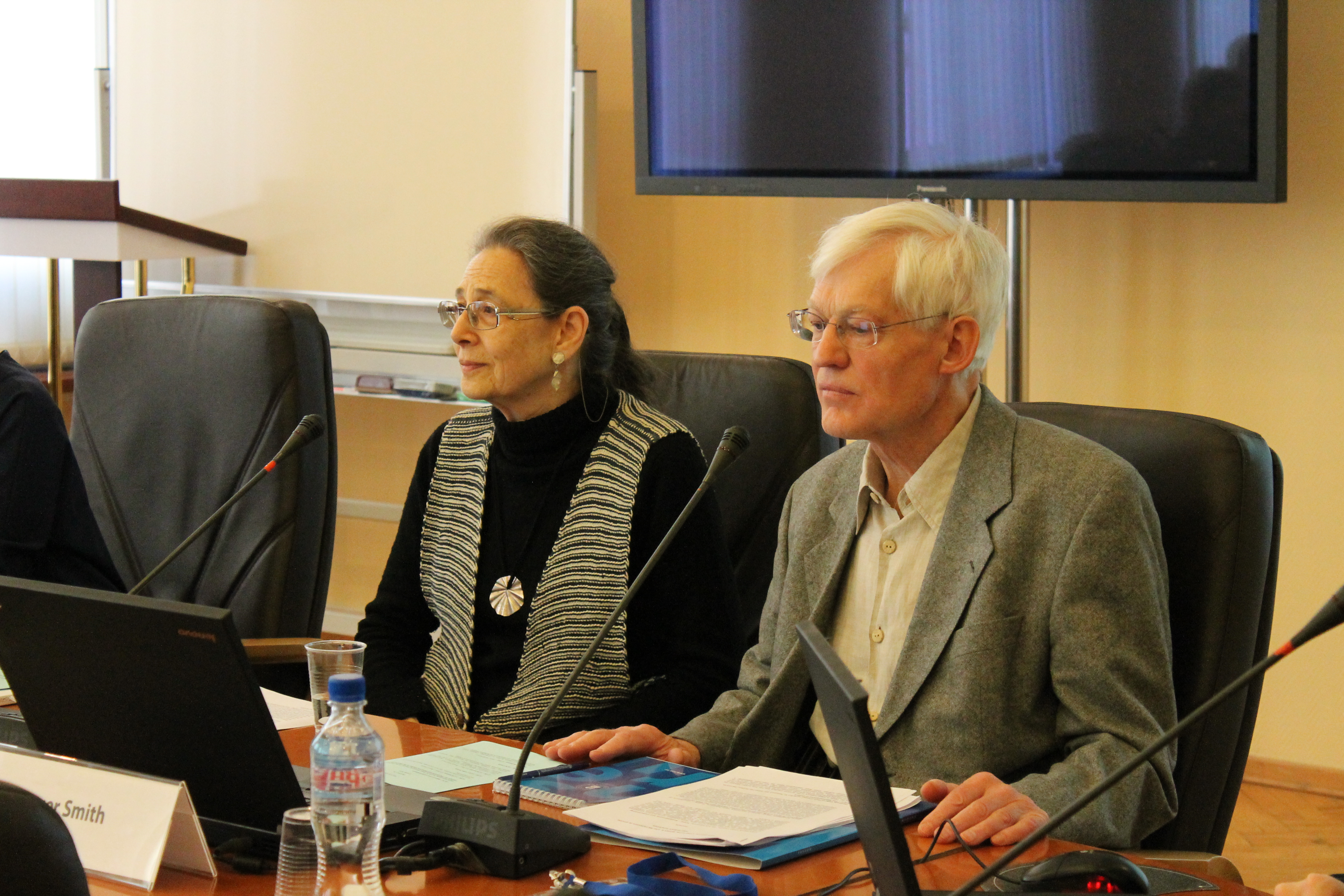 Snait Gissis (Cohn Institute, Tel Aviv University, Israel), presented a paper on Evolutionizing and Collectivizing. She shared her impressions of the conference - it was her first at HSE and her first in Russia.

— I think as a round table it was very productive.  Also the participation of younger people and more experienced people, the combination of it was very good. I’m very happy to  be here because it’s a very stimulating workshop.

As for crucial aspects in papers, Ullica Segerstrale from Illinois Institute of Technology, Chicago, USA who presented a report Social Concepts, Models and Metaphors in the Biological Sciences touched upon the issue of controversies and differences between what is considered hard core facts, ideology, values and implications for policy making, and how this is important for the issue and whether it is the reason for interaction or not.

This year the conference focuses on the persistent yet troubled relations between social and life sciences, primarily biology, from the early period of their development in the mid-XIXth century until today. Though biological models and concepts played a constitutive role for the early social theory (especially evolutionism and organicist metaphors), much of this influence was later judged as ethically dubious, irrelevant and even anti-scientific (as in the case of race theory or eugenics). Though hybrid and semi-marginal forms of knowledge blurring the boundary between the two continued to exist, biological determinism was broadly dismissed in the name of social constructionism and autonomy of the social. The recent boom of neurosciences and brain studies has revived the issue of the interrelations between the biological and the social (cultural) in human beings and in social phenomena. Conference participants considered different aspects of these complex relations in different subfields of social and life sciences during the late XIXth and throughout the XXth centuries. 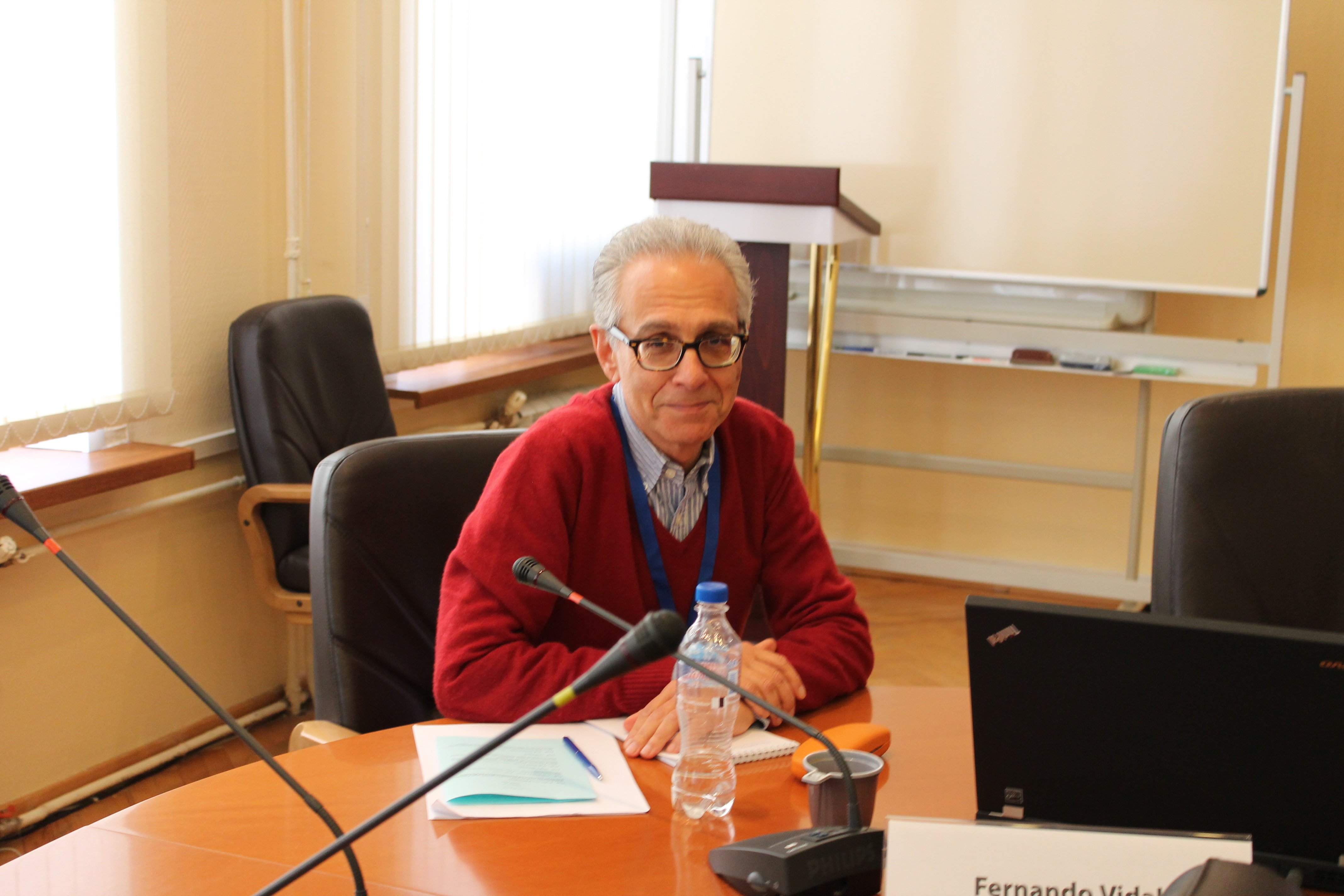 Fernando Vidal, (Catalan Institution for Research and Advanced Studies, Barcelona, Spain) who presented his report The Neurosciences of Culture, touched upon the question whether the proliferation of sub-disciplines within any field has to do more with institution and financial questions, trends and fads, or is really a product of more profound probing.

When asked about his opinion on the future development of computer science and ideas that a lot of professionals in different areas might be totally replaced by machines, Fernando Vidal said:

— A lot of students have been participating in the workshop. Did you have an opportunity to talk to them?

— I think the young people didn’t participate in the event openly as I would have liked to in the sense that they were there, but maybe not participating as much. But during the pauses I had a chance to talk to them and they were very communicative, their English was very good, their ideas, their training, their questions were all extremely relevant. So my impression is extremely good. And I think it may just be that in the framework of an international  workshop they still need to relax little bit to participate. But I’m really glad that during coffee breaks some of them came to me to ask questions and to interact.

— You touched on cultural aspects in your report. What would you recommend young people to read to be more ‘human’?

I would recommend young people to read fiction. It can be anything from the great classics of Russian literature to contemporary more or less trashy science fiction but I think that fiction opens a lot of individual paths to self-knowledge, thinking about the world at the same time as one is enjoying oneself, that’s crucial for intellectual life.

There are plans to publish a special issue of the History of Science journal about the conference. It should summarise the results of the October conference and discussions which have been going on over the last three years at HSE about the history and sociology of knowledge and science.

It's All about Social Capital

Multiple factors determine how well immigrants can adapt to living in a new country. According to research, the key factors are social capital, i.e. having friends who can help with housing, employment and other basic needs, and the immigrant's approach to becoming part of their new community and culture (i.e. acculturation attitudes and strategies). A team of HSE researchers examined the relative importance of social capital and acculturation strategies for successful adaptation of immigrants from Central Asia and South Korea living in Moscow.

A Proud ‘No’: Why Egalitarian Values Don’t Catch on in Post-Soviet Countries

People’s values of personal choice, suсh as their attitudes towards abortion, divorce, and premarital sex, are usually determined their level of education, age, religiosity, and social status. At least this is the case in many countries such as the US and those in Europe. In a recent study, HSE sociologists found that in post-Soviet countries, personal values are most determined by people’s level of patriotism.

Three to Ten: Why Families Choose to Have More Children, More Often

More than 500 large families in three Russian federal districts were surveyed to explore reasons why couples choose to have many children. Five main patterns were identified, driven by values (partner trust and religious beliefs), socioeconomic circumstances (income and education), and availability of support from extended family and friends.

‘I Am Really Thankful for This Opportunity to Expand My Knowledge’

Friederike Augustin is a second year Master’s student in Comparative Social Research double degree programme with Free University of Berlin. After reading European Studies for her Bachelor’s she enrolled in an Eastern European Studies programme to have the opportunity to spend some time in Russia.

The Turnstile Tango: How the ‘Turnstile Era’ Influenced the Physicality of Muscovites

The turnstiles and entrance gates used in municipal transport not only ensure that passengers pay, but also structure their behavior according to age, body size, ability and speed. Many people must maneuver themselves to pass easily through the rotating arms or swinging gates of an Automated Passage Control System (APCS): passengers cannot be too large or too small and must not walk too quickly or too slowly. Sociologists studied how turnstiles impose uniformity on passengers’ physicality and behaviour.

Isolated, Vulnerable, and Apathetic: HIV and the Transgender Community in Russia

Although HIV infection rates are high among the transgender community in Russia, many transgender people know very little about the virus, as well as their own health status. In Russia’s first study to examine transgender people as an at-risk social group for HIV transmission, demographers attribute these high infection rates to the community’s social stigmatization and isolation, as well as a lack of access to medical services. The study’s findings have been published in the HSE journal, Demographic Review.

Fear of Violence: Why It Haunts Women in Big Cities

The greatest fear of young women living in big cities is that of sexual violence. It is not necessarily based on the actual crime rate in the city but often instilled by family and society. As a result, women tend to carefully pre-plan their behaviour and movements in 'suspicious' places based on safety concerns. HSE researchers interviewed a group of young women about certain aspects of their fears and strategies they use to deal with it.

Couples with three or more children often feel that others judge or refuse to understand them. Their decision to have many children seems to annoy their extended family, neighbours, colleagues, health professionals and government bureaucrats. Very often, other large families are the only one who offer them support. Based on findings from in-depth interviews, HSE researchers describe the effect that social interactions can have on fertility.