Main social development objectives up to 2024

Maxim Topilin, Russia’s Minister of Labour and Social Affairs, opened the plenary session, arguing that issues of social development are now more relevant than ever given that the government has begun to fulfil the objectives set by the President in a decree from May 7, 2018.

One objective concerns the income of residents. A presidential decree was adopted on increased social payments for children with disabilities (up to 10,000 thousand roubles), as well as on increasing social and regional pension bonuses for those whose income is below the subsistence level. Depending on the indexation, which will now be made in excess to the amount of the minimum wage, pensioners will receive an appropriate increase.

The government is also working on a draft law that increases the limit (from 1.5 to 2 times the poverty level in Russia) for the assignment of benefits for the first and the second child. After the birth of the second, third or subsequent children families will be provided with a mortgage benefit at a reduced rate of 6%. This benefit will not be limited to eight years, as was the case previously.

Constructing nursery schools for children from 1.5 to 3 years, which will help to solve the problems of queues to enrol children in day-care organizations, and prolonging the programme to provide subsidies to families with multiple children to 2021 were among other measures mentioned by the minister.

At the same time, he stressed that the effectiveness of new measures should be assessed no earlier than six months out, although it is now clear that the public is insufficiently informed about them.

Together with State Duma officials, we have prepared a bill allowing us to create an e-resource that will give people maximum information about existing types of payments

Another important task is to bring the total fertility rate to 1.7 by 2024. As the Minister stressed, the goal set in the President’s decree is natural growth of the population. An equally ambitious goal set by the government is to reduce poverty by half.

‘Now we are working with the regions, and most of them have already agreed with the Ministry’s plans to reduce poverty by half before 2024,’ says Topilin. ‘For the next year we have allocated budget funds to implement the social contract programme in the regions. At the same time, we believe that poverty should decline as a result of economic policy and economic success, and the economy should contribute to this objective through increased wages and new jobs.’ 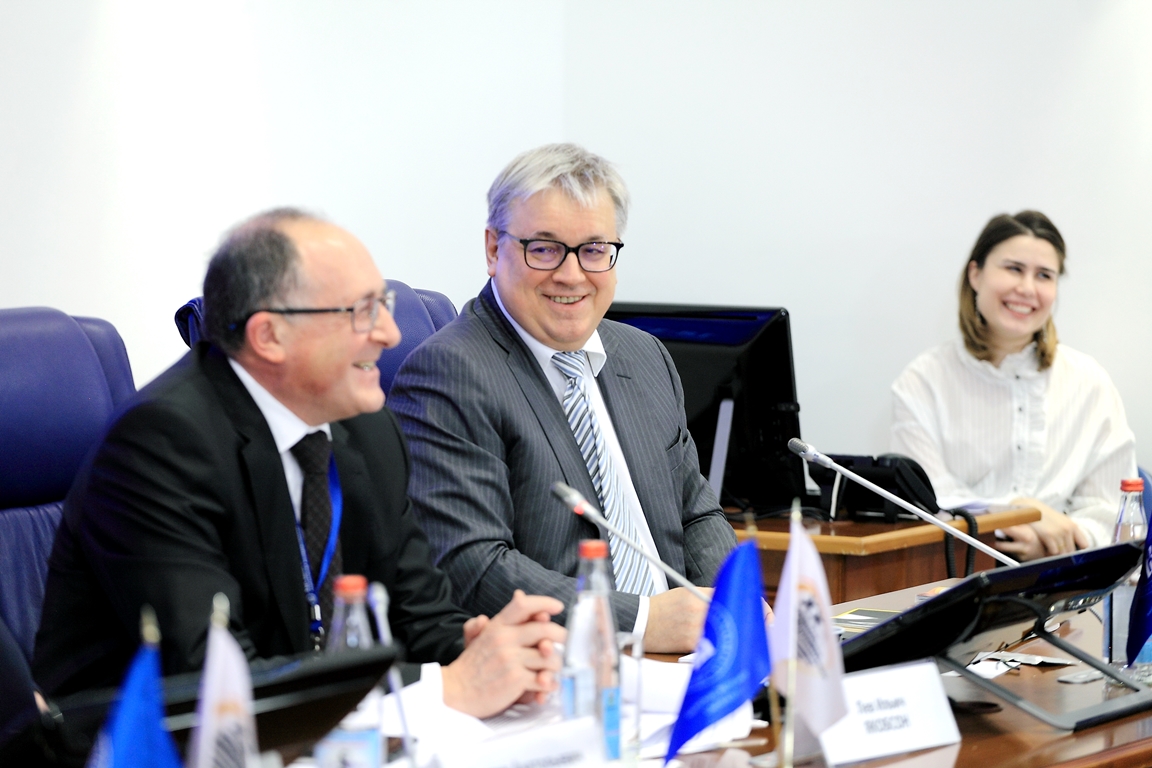 HSE Vice Rector Lilia Ovcharova presented a report on the analysis of risks along the path to achieving national goals and potential opportunities in key areas of social development.

She noted that natural population growth is achieved only with a total fertility rate of 1.74, not 1.7. ‘If we want to achieve demographic goals, we need to understand that reaching target indicators for the birth rate will not provide natural growth. However, the total fertility rate, where we are focused, is in line with the global trend. This task is achievable. We see countries where these figures are higher, but they have large migration potential, in our country, this is beyond the limits of national projects. We should not forget that migration reduces mortality and increases fertility, and this potential needs to be taken into account,’ says Lilia Ovcharova.

Assessing the feasibility of the national life expectancy goal, the HSE Vice Rector pointed to health care as the primary factor and main untapped potential for reducing mortality, which is not currently accounted for in the national projects. She listed five solutions that should significantly increase the contribution of health care to reducing mortality and increasing life expectancy:

division of areas for therapists and other healthcare specialists;

She believes that implementing these measures will significantly reduce the risk of not achieving the target life expectancy.

Other measures for sustainable social development

HSE Rector Yaroslav Kuzminov noted that two-thirds of Russian residents don’t belong to the middle class, and the rate of social stratification is very high. This requires certain balancing mechanisms from social policy. He believes that introducing a progressive personal income tax scale (which was abandoned in the early 2000s) is a measure that could help to improve social sustainability.

It doesn’t matter how much money we collect from the rich, but it’s important that citizens in the worst economic situation know that the state takes more from those who earn more

In addition, Kuzminov stressed the need to introduce quotas for children from low-income families and families with poorly educated parents in top educational programmes: ‘Both measures are widely applied in other countries, but we still haven’t put them to practice.’

Another aspect that the HSE Rector touched upon concerned the reduction of residents’ lack of success economically and socially. ‘Educational policy and investment in education are the main tools in this situation. About 25% of ninth-grade students fail to master at least one major subject — they have poor command of either Russian or mathematics. And 14% fail in two or more subjects. The problem requires a solution,’ says the HSE Rector>

The problem of young people’s lack of success was also discussed at the plenary session ‘The New System of Social Mobility in Russia as a Way to Renew the Elite’ at the XX International April Conference at HSE.

Yuri Voronin, Chief Financial Commissioner for the Rights of Consumers of Financial Services in the Russian Federation, touched upon the crisis of the current social contract and the need for it to be reconsidered from a methodological standpoint. Olga Tkacheva, chief geriatric specialist at Russia’s Ministry of Health, insisted on the need to move from reactive medicine (treatment of acute diseases) to a model of continuous life monitoring (prevention, monitoring, and support).

‘When we say that aging means a compulsory increase in the cost of health care and social assistance, this is not true. We need to shift our focus to long-term care, timely diagnosis and prevention (an intensive response to ageing). In doing so, we increase life expectancy – not life with diseases, but a healthy life,’ she says.

Together with State Duma officials, we have prepared a bill allowing us to create an e-resource that will give people maximum information about existing types of payments