We talked with Irina Gluschenko about how she became interested in Soviet cuisine, what it was like to collaborate on a book project with an international team, and what she’s got ‘cooking in the oven’ now.

It All Started with a Sausage Advertisement 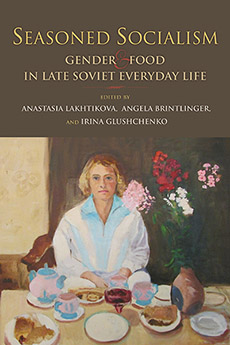 Once I saw a poster in the metro showing different varieties of sausage with the slogan, ‘Mikoyan. The official supplier of the Kremlin since 1933.’ The advertisement presented the Stalin era as a kind of golden age — and let’s not forget who was in the Kremlin at that time: Stalin, Molotov, Kaganovich and Beria.

The advertisement united various phenomena and images: both an interpretation of the Soviet past and the image of the ‘abundant’ 1930s, as well as, most importantly, the image of an industrially produced meat product — the symbol and myth of the Soviet era — sausage. The ad turned out to be very multi-layered and its encrypted meanings were very interesting for me. This is described in detail in my book, Mikoyan: Public Food Services and Soviet Cuisine(HSE University Press, 2010, 2nd ed. 2015).

It was American scholars Angela Brintlinger and Anastasia Lakhtiva who came up with the idea for the book, Seasoned Socialism. Gender and Food in Late Soviet Everyday Life. In the book, we attempt to add new dimensions to gender studies, looking at issues from the perspective of everyday practices connected with food. Food, after all, opens a whole range of topics, from consumption to etiquette, that provide insight into male and female behavior. We show how Soviet society created its own system of gender roles and relations, not unlike that of that of the West. This system also had emancipation and discrimination, but it all happened in a different way.

We worked remotely. It took a long time—searching for authors, selecting materials, editing, editing again, and again and again, receiving blind peer reviews by American colleagues…. Publishing an academic monograph in the US is a rather complicated process, especially when it comes to an edited collection. Each text is discussed with all project participants. In total, the work took four years. But now the book is out, and we’ve got various talks and presentations planned in the academic sphere.

Standardization, Centralization and Unification: Fundamentals of the ‘Socialist Kitchen’

First you need to decide what is meant by socialism. Modern researchers have long avoided repeating the Soviet Union’s self-characterization as ‘the country of victorious socialism.’ After all, who said this? It was Stalin in 1936. He said this in connection with the need to revise the Constitution—from the power of the soviets to the system of pseudo-parliamentary institutions, where the real power belonged to the party. Of course, we understand why it was impossible to argue with him in those years. But why do we still repeat it? There was no socialism in the Soviet Union, but rather a peculiar form of a social state with elements of socialism—and this was actually created much later. What existed in the 1930s is a classic example of the ‘dictatorship of modernization’. And if we look at the Soviet system of that time in this respect, then yes, we can single out the features that were reflected in Soviet cuisine. This is standardization, centralization and unification. After a long period of searching for optimal forms, a balance was found between home cooking and public food services, and both were based on industrial products.

Soviet Life and Cooking Through the Prism of Cinema

I believe that by the end of the Soviet period, a unique gender model emerged in society: against the backdrop of women's emancipation, the symbolic role of the ‘keepers of the hearth’ passed to men, but they still demanded practical duties from women.

This contradiction was reflected and in grappled with in scholarship, periodicals, journalism, as well as books and films of the time.

In these films, the main character is a modern, independent woman, and in two cases, the women have a higher status than their partners. All three films contain themes home cooking, restaurant practices, home life, as well as division of labor. Each film features characters who move freely and characters who are confined, and sometimes the subsequent films contain obvious references to the previous ones.

There is only a five-year span between the first film (Moscow Doesn’t Believe in Tears) and the last (A Time of Desires). The films kind of provide a summary of the state of gender relations towards the close of that era. And there was a common problem that not only became of central focus to the directors, but became their statement in the framework of another, broader discussion that was unfolding then in Soviet society.

This problem was the fundamental contradiction of women's emancipation, which in its Soviet variation was finally established in society by the mid-1970s and never resolved until the very end of Soviet history.

The problem was how to reconcile two opposing models of female life: one in which women work outside the home, and the other, where women work within the home

Neither of these spheres could develop without damaging the other. And yet both of them were crucial; neither could be sacrificed.

Moscow Doesn’t Believe in Tears showed men’s negative attitude towards women's success, and this topic, which is quite understandable at the household level, was absolutely beyond the official discourse, as well as beyond cultural issues. The problem here is not only in ideology: gender issues in principle were not reflected in society, at least at the level of public debate. Cinema seemed to fill this vacuum of public silence.

In other films, the image of a man is lowered, and it turns out that the idea that men should dominate women was not based on any real superiority of women, but rather a result of an inferiority complex. In A Time of Desires, a go-getter business woman becomes a threat to the man she provides for, which ultimately leads to his death.

Right now, I am seized by the era of stagnation: I have long wanted to understand this unique period of Soviet history. I see it as the highest point of Soviet social development, where much of what today is considered ‘Soviet’ reached its ultimate incarnation. Under Brezhnev’s rule, when the USSR was at the peak of its ‘superpower strength’ but no longer needed to employ overt pressure from above in order to maintain this status, there arose an equilibrium, a kind of Soviet optimism, in society.

The flip side of this balance was the rapid decay of the system, which, as it turned out, could function successfully only under conditions of severe internal and external pressure. The Soviet model of the stagnation period was irreparable precisely because it had already reached its optimal form within itself. Further development of the system could only be its collapse.

Associate Professor at the School of Cultural Studies

Irresistible Passion: Philately in the USSR

Soviet-era postage stamps illustrate the country's history in miniature, from the early years following the Communist revolution to the 1980s' perestroika. Government and public attitudes towards philatelists reflected an overall distrust of any type of 'otherness'; indeed, why would anyone spend time studying and collecting postage stamps? Thus, it should come as no surprise that periods of philatelic internationalism were followed by times of isolationism and pressure on stamp collectors. Despite efforts to place philately within the procrustean bed of Soviet propaganda, people with a passion for stamps stood out from the crowd and were often perceived as dissenters. The discussion of Soviet philately presented below is based on a paper by philologist Konstantin Bogdanov, professor at the HSE Campus in St. Petersburg.