On November 15th 2011, Hiroshi Ishiguro delivered a lecture at the HSE on ‘Human, Androids and Media’. The event was organized by the Embassy of Japan in Russia, The Japan Foundation and the HSE Faculty of Business Informatics.

Professor Ishiguro is one of the most renowned robot developers in the world. He is involved in studying problems of basic intellect aimed at the creation of a robot which will be able to exist in human society and has already developed and created a large number of robots.

The lecture was dedicated to robots as a symbol of high technology in Japan, the history of robot technology, its technical and cultural specifics and the development of robots alongside human activities. Professor Hiroshi illustrated his speech with some of the results of his own research.

‘Our future is with robots’ – these were the words that began the lecture. And in fact the whole history of robot technology proves that robots are becoming more and more involved in human life. There are already interactive robots who are able to react to words said by humans; in Japan, which is an acknowledged leader in this area, there are robots-carriers at train stations and airports, as well as social robots who help disabled people. In addition to ticket or hot drink machines, there are robots-waiters.

According to Prof. Hiroshi, robot evolution is gradually moving towards humanization. At first, robots were taught to move, then to say some separate words, and then robots with human appearance appeared. Modern robots can react to human speech and even express emotions. This means that robots are at the early stages of environment perception. The next step is the education and development of robots. 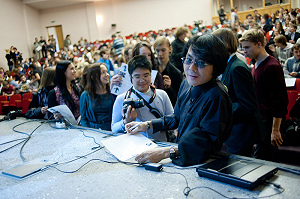 This situation in robotics can be explained by the desire of the Japanese to achieve technological excellence. In Japan there is even a separate scientific field – Android science – in which experts are involved in the creation of human-like robots.

Strictly speaking, man has always subconsciously tried to invent a robot which would be like him. At first, there were humanoids – anthropomorphic robots. In Japan they have long been s developing robots who look indistinguishable from human beings at the first glance. Technology to imitate emotions and facial expressions is developing. This has lead to the emergence of androids. Initially, they were totally artificial, but today, their construction often involves different organic elements, such as skin, hair in order to make them appear more lifelike. In June 2009 researchers from the Tokyo University presented a human-like robot KOBIAN who was able to express emotions, such as happiness, fear, surprise, sadness, anger and disgust, through gestures and mimes. Robots like this are able to open and close their eyes, move their lips and eyebrows and use their hands and legs.

Professor Hiroshi Ishiguro is the creator of a new generation of robot – the geminoid. It was created in 2005 and looks exactly like his creator. Today there are three geminoids, in addition to the one mentioned above there is a girl geminoid, and a copy of a Danish researcher Henrik Scharfe. At the moment, these geminoids are unable to think independently, but they can be operated remotely.

In the movies, Hiroshi Ishiguro said, robots are still shown as an embodiment of dark forces, as a kind of ‘criminal element’. But this is, the speaker believes, a misrepresentation. Robots are already helping man and can play their own role in art. For example, in Japan there is an android theatre. One of the recent developments is Elfoid (Telenoid) – a robot which you can communicate with by mobile phone, operating him remotely. This is the technology of the future in communication.

What will happen to us when the androids learn to think? It is difficult to say, but, according to Hiroshi Ishiguro, man will still be different from a robot. A modern supercomputer consists of 10 billion transistors, and a human brain contains about 14 billion neurons – so, the gap between the artificial intelligence and the natural one seems to be not that large. However we should not forget about the quality of these elements: we mustn’t assume that neurons and transistors are equal. And, finally, it is man who created robots, not vice versa.

Structure and Dynamics of α-hairpinin Peptide Tk-hefu2 in Water: Computer Simulations, an article in which HSE researchers make discoveries relevant to a variety of fields, including mathematics, information science, physics, and biology, opens up new opportunities for medicines to arise that regulate the function of potassium channels that ensure the vital functioning of human cells.

On the 15th May, 2015 Shimada Nobuo gave a lecture at HSE on Japanese Military Culture. Shimada Nobuo brought some swords from his own workshop and allowed his audience to hold them while he talked about the enduring Japanese interest in weapons of war and the Japanese soul. Owner of the Yamashiroya gallery and specialist on ancient artefacts, Mr Nobuo advises the Japanese ministry of culture and works with the Hermitage and other museums in St Petersburg and around the world helping them with their Japanese collections. He gave his talk in Japanese with Russian translation. He gave this interview to the HSE News Service.

On September 30, Yaroslav Kuzminov, rector of the Higher School of Economics, and representatives of the HSE met with a delegation from Japan’s Tohoku University led by the university’s president, Susumu Satomi. Both sides signed university-wide agreements on cooperation and academic and students exchange between the universities in the fields of linguistics, economics and management and other areas of mutual interest.

Energy Consumers and Suppliers Need to Work Together

The experts expect changes in the world energy market, and Russia and Japan can collaborate to develop a concept for energy security in the Asian region. Nobuo Tanaka, former Executive Director of the International Energy Agency, recently delivered a lecture at the HSE.

Кen Jimbo, Professor at the Keio University (Japan), spoke on ‘2030 Strategic Trends in Asia-Pacific: Implication for Japan-Russia Relations’ at a roundtable discussion at the HSE. The event has been organized by the Faculty of World Economy and International Affairs.