On June 26, the HSE Academic Council approved the opening of two new international laboratories. Specifically, the St. Petersburg School of Economics and Management will gain a laboratory for the study of healthcare economics, management, and policy, as well as a laboratory for game theory and decision-making. The labs' academic supervisors will be renowned international scholars.

HSE St. Petersburg has significant experience in researching healthcare economics and policy, but this experience has thus far only been reflected in the publications of a handful of university researchers. The new laboratory should lead to the systematisation and institutionalisation of such research.

A portion of proposed research projects will be based on data from the Russia Longitudinal Monitoring Survey of the Higher School of Economics (HSE-RLMS), such as data on smoking and drinking problems, as one interesting example. Another area of focus will be tied with cardiovascular disease in the northwest region of Russia. The laboratory will also carry out comparative research (on BRICS in particular) and look at how healthcare economics and management affect the labour market.

The St. Petersburg laboratory is prepared to carry out multidisciplinary work as well, and the lab also plans to work closely with colleagues in Moscow who study similar topics. The head of the laboratory will be HSE Professor Christopher Gerry, and the Academic Supervisor – University of Leeds Professor Paul Kind, who is a well-known British specialist on methods of clinical and economic evaluation in healthcare.

It is not difficult to see why this laboratory is being created specifically in St. Petersburg, as the city's mathematicians were actually the founding members of the study of game theory in Russia. In particular, researchers from the St. Petersburg Institute for Economics and Mathematics will form the backbone of the laboratory, while Professor Elena Yanovskaya will head the new lab. The academic supervisor will be University of Glasgow Professor Herve Moulin, whom HSE Vice Rector Maria Yudkevich considers to be a ‘real live classic’ in game theory. One of the laboratory’s aims will be the economic application of game theory, and lab researchers will work closely with the International Laboratory of Decision Choice and Analysis, which operates in Moscow and is headed by tenured Professor Fuad Aleskerov and Nobel Laureate Eric Maskin. 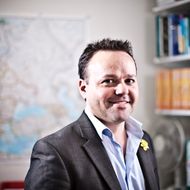