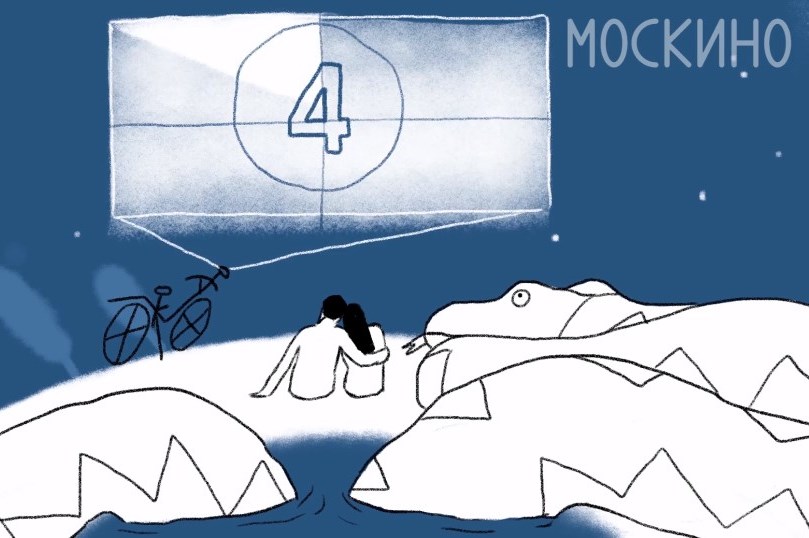 Video frame from the project by Katya Mikheeva for Moskino

Cinema guests should respect the cinema and other viewers (which means not talking during the film, rustling your popcorn, or lighting up your phone screen)—this is the message of the video clips created by the Animation and Illustration programme alumnae.

Each video presents a short animated film that employs metaphors, movie quotes, as well as images of famous movie characters to convey Moskino’s cinema rules for patrons. Moskino adopted all three videos it commissioned from the artists, and they can be viewed today in Moskino cinemas around Moscow before the beginning of feature films.

Yulia Kulikova wanted to create a clever video for cinephiles. ‘I decided to feature well-known film characters in the clip. We took a class on cinema history, so I’m familiar with all the characters. Using characters allowed me to use freeze frames to create the animation,’ says the Art and Design School grad. The project took about a month and a half: during this time, she managed to gather characters from different eras into one cinema—from the silent film vampire Nosferatu to Vincent Vega and Jules Winfield from the ‘90s cult film Pulp Fiction.

‘Rules of conduct in the cinema’ by Yulia Kulikova

The artist plans to work on additional animation projects in the future and looks forward to creating cartoons, clips, informational videos, and more. Her studies at HSE, she says, helped her rethink the aims and possibilities of animation.

I used to have a somewhat limited view of animation as a means of creating only cartoons. Now I view animation as a form of art; a modern animator can be a modern artist. It all depends on what the person themselves aspires to

In her video, Katya Mikheeva presented an alternative version of the story of Adam and Eve using hand-drawn animation. ‘Everything started to unfold around the image of a projector bicycle,’ she says. The idea later took form in a story featuring Earth’s first human inhabitants. Over the course of the month-long project, Katya says, it was developing the clip’s plot that proved to be the most challenging and exciting.

‘Rules of conduct in the cinema’ by Katya Mikheeva

‘I was inspired by the cartoons of Michaël Dudok de Wit, like Father and Daughter and The Monk and The Fish. I like his minimalistic style and the expressiveness of his animation,’ says Katya when asked about the influence of her favorite animation director on her work.

I am grateful that fate brought me to HSE. I met a lot of talented people here. I want to do animation and direct movies

In addition to collaborating with Moskino, the artist works as a cartoon director and animator and shoots clips and videos. In the future, Katya plans to work with both drawn and physical movement.

Part of the Department of Culture of the City of Moscow, Moskino manages a chain of 14 cinemas (including Cosmos, Salut, Zvezda, Fakel, Yunost, and others). Every year, Moskino holds hundreds of retrospectives, auteur film festivals, film clubs, premieres, and director events. The organization boasts an expansive collection of 35 mm Soviet classic films, which are housed in the Moskino Cinematheque. Moskino is the organizer and curator of the citywide Night of Cinema Festival.