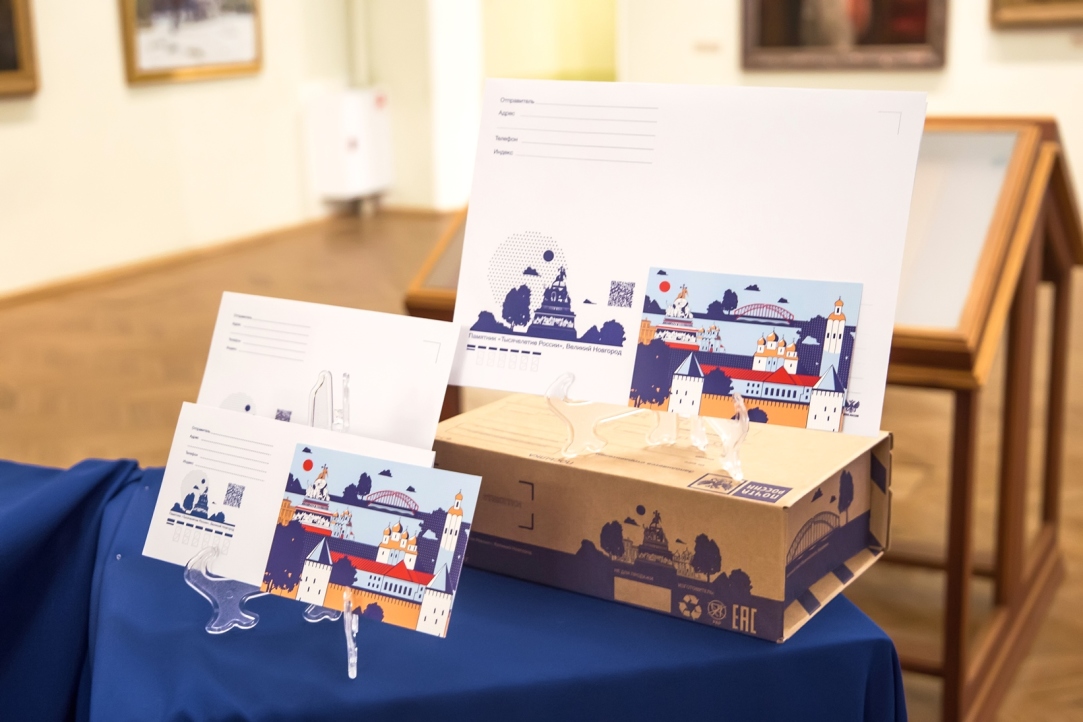 Alena Akmatova and Svetlana Ilyushina, graduates of the HSE Art and Design School Master’s programme (2017), won the open Russian Post competition, which was held jointly with the Novgorod regional government and the Novgorod State Museum-Reserve in the autumn of 2020. Participants had to design a series of limited edition postcards and packaging dedicated to the cultural and historical heritage of the region.

The ‘Millennium of Russia’ monument, the Novgorod Kremlin and the Belelyubskiy Bridge in Borovichi are landmarks of Veliky Novgorod. Using images of these historical sites, the Russian Post competition required participants to come up with designs for mailing boxes, packages, envelopes, postcards, and packing tape. ‘We quickly shared responsibilities and started looking for the right style for the project,’ says Svetlana Ilyushina, a graduate of the HSE Art and Design School, and winner of the competition. ‘We wanted the objects to look simple, but at the same time we didn’t want them to lose their grandeur.’ 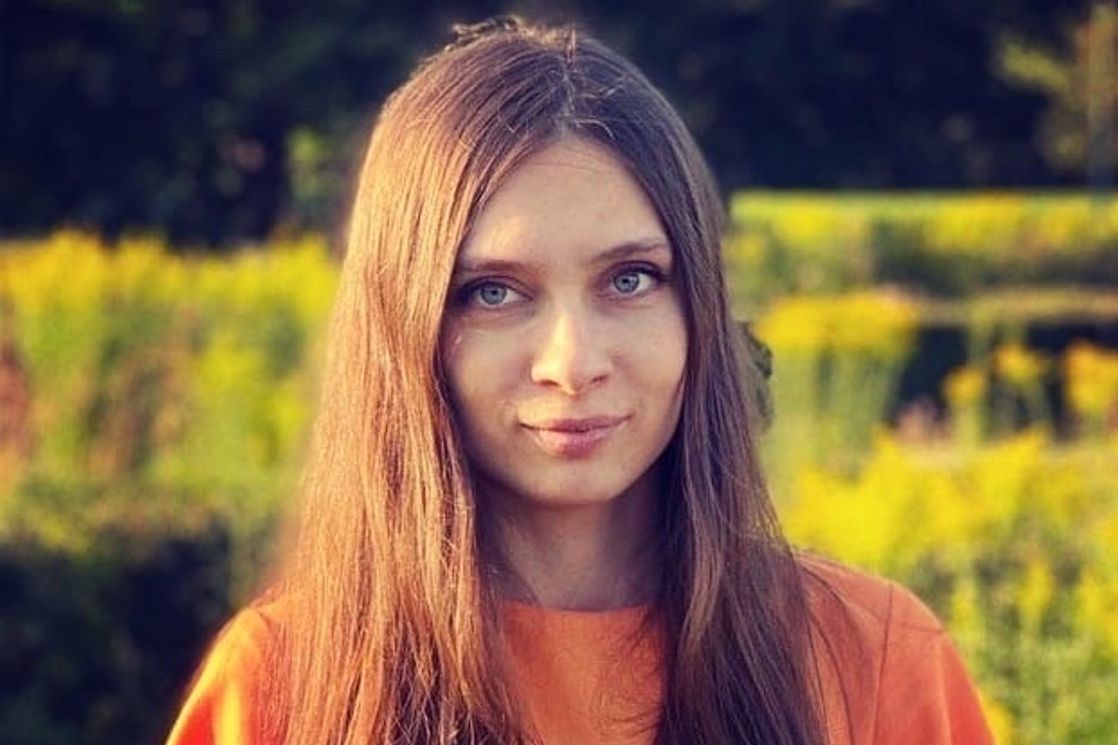 Svetlana and Alena divided the tasks according to their professional interests. As an illustrator, Svetlana was responsible for drawing all the landmarks for the project. Alena, a graphic designer, was in charge of layout, colour selection, and the placement of images on various types of media, from mailing boxes to packing tape.

The two were inspired by the colourful world of American illustrator Calvin Sprague. That said, the HSE Art and Design School graduates tried to reflect the warmth and comfort of the Novgorod region in their works. ‘Since the colour scheme of the Russian Post is limited to shades of blue, it was not easy to convey all the brightness and whirlwind of colours of Veliky Novgorod,’ admits Svetlana. The only objects for which there were no colour restrictions were the postcards.

‘In the postcard design we played with colours a little bit and added some rich red, orange and light blue to the standard blue,’ Alena says. ‘And it shone in the sunlight, and we felt even more warmth. In addition, through decorative elements — trees, clouds and patterns — we combined three cultural objects in a graphic image.’ 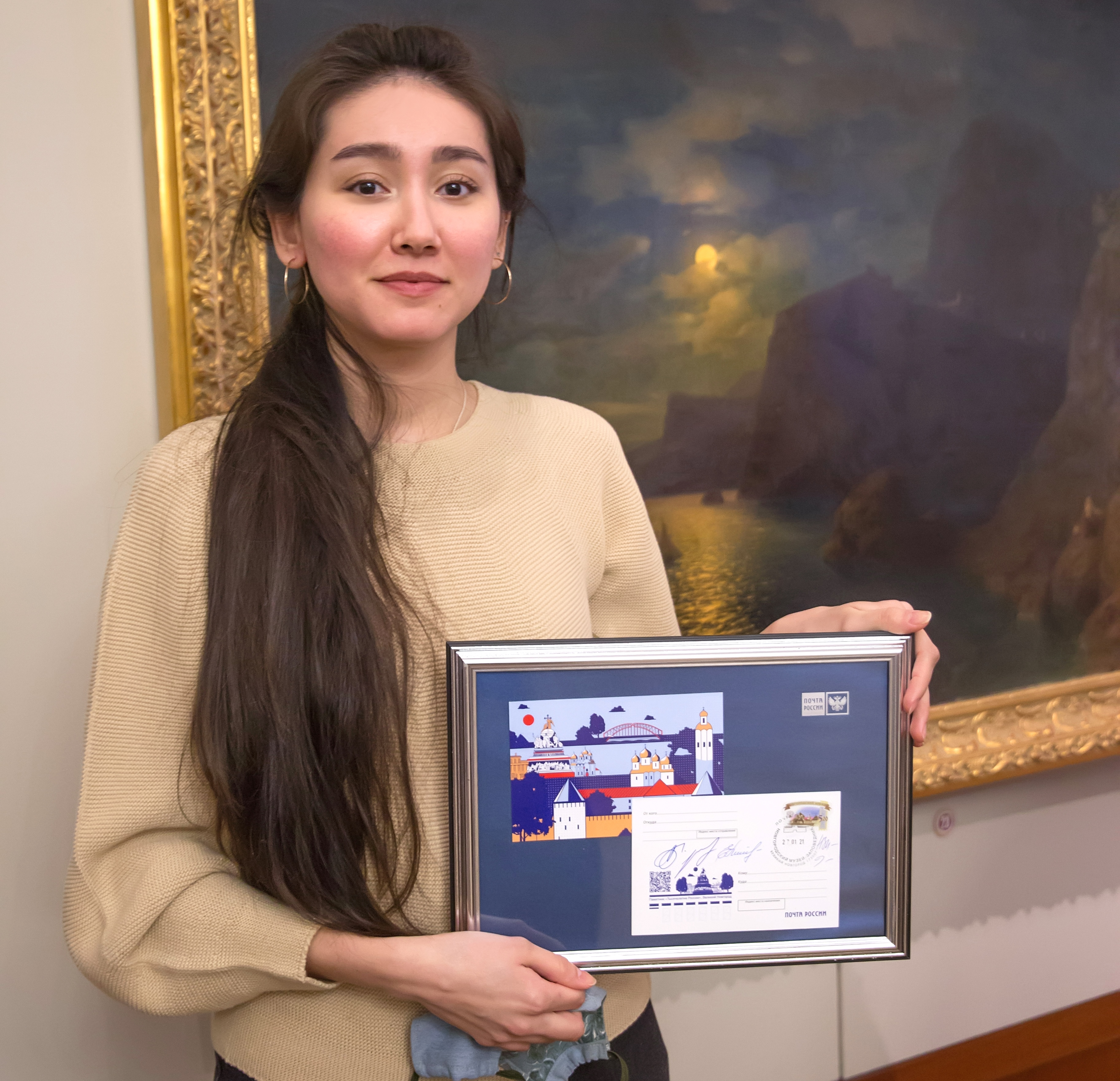 As a result, the jury commended their work, and in January 2021, the Russian Post launched a series of packaging designed by Svetlana and Alena—one million postcards, packages and boxes.

‘The Russian Post brand is very fresh. It has been changing a lot lately, which is why we decided to participate in the development of its graphic communication. In addition, to get a ready circulation of products with your design is pleasing and important in our work,’ says Alena.

The graduates now work as freelancers in graphic design and illustration. While still in graduate school, they teamed up with two other students and created the onefs.design group. Alena and Svetlana note that this was made possible thanks to their studies at HSE University: ‘The knowledge and skills gained at the HSE Art and Design School helped a lot. For us, for example, it was unclear how to put together a design, what to focus on initially. Using our acquired skills, we were able to form a clear and coherent system in our heads.’ Alena says that studying at HSE University helped to give her a better conscious understanding of design: from logo development to corporate identity. ‘HSE University has its own atmosphere — it’s very kind and warm,’ she recalls. ‘We liked to work late in our classrooms, because the process was very interesting, and it was easier (and more fun!) to find a solution to a problem with the team.’

Now, before starting another project, the girls analyse whom it’s for and why. ‘From the design lecture course, we learned about all the global designers and styles in communicating design,’ adds Svetlana. ‘And, of course, we started to feel more confident in graphic software. We aren’t afraid to make mistakes — they might even come in handy as inspiration for a future project.’

The Misadventures of Soviet Furniture

In the late 1950s, Soviet designers created something unprecedented in the Soviet Union — lightweight, modular furniture for the entire apartment. However, their progressive take on interior design clashed with reality. The system trumped common sense, with the result that the best entries in the first national competition for furniture designers remained little more than good intentions. HSE University Art and Design School instructor Artyom Dezhurko studied the history of the competition.