There is a horse standing in the middle of HSE University’s central atrium on Pokrovsky Boulevard. It’s moving its ears, and if you take a closer look, you’ll see that it has an odd, old-fashioned harness. If that sounds like a strange sight for a university building—it is.

However, the administrator of this historic building doesn’t look alarmed. That’s because the horse and others like it are part of an interactive AR guide of the Durasov House created by students of the HSE Tikhonov Moscow Institute of Electronics and Mathematics (MIEM).

Those watching the horses in the atrium will also learn that in the 19th century, the site was home to a riding hall lent by the Academy of Commerce (located in the Durasov House until the Revolution) to the neighbouring Pokrov Lodgements. Further along, visitors can look through their devices to witness the building’s transformation over the years: a fire lights up in a historic fireplace, and the main stairs are lined with the busts and bas reliefs of Peter the Great, Napoleon, Suvorov, Marx, Engels and Lenin that stood here in various periods. 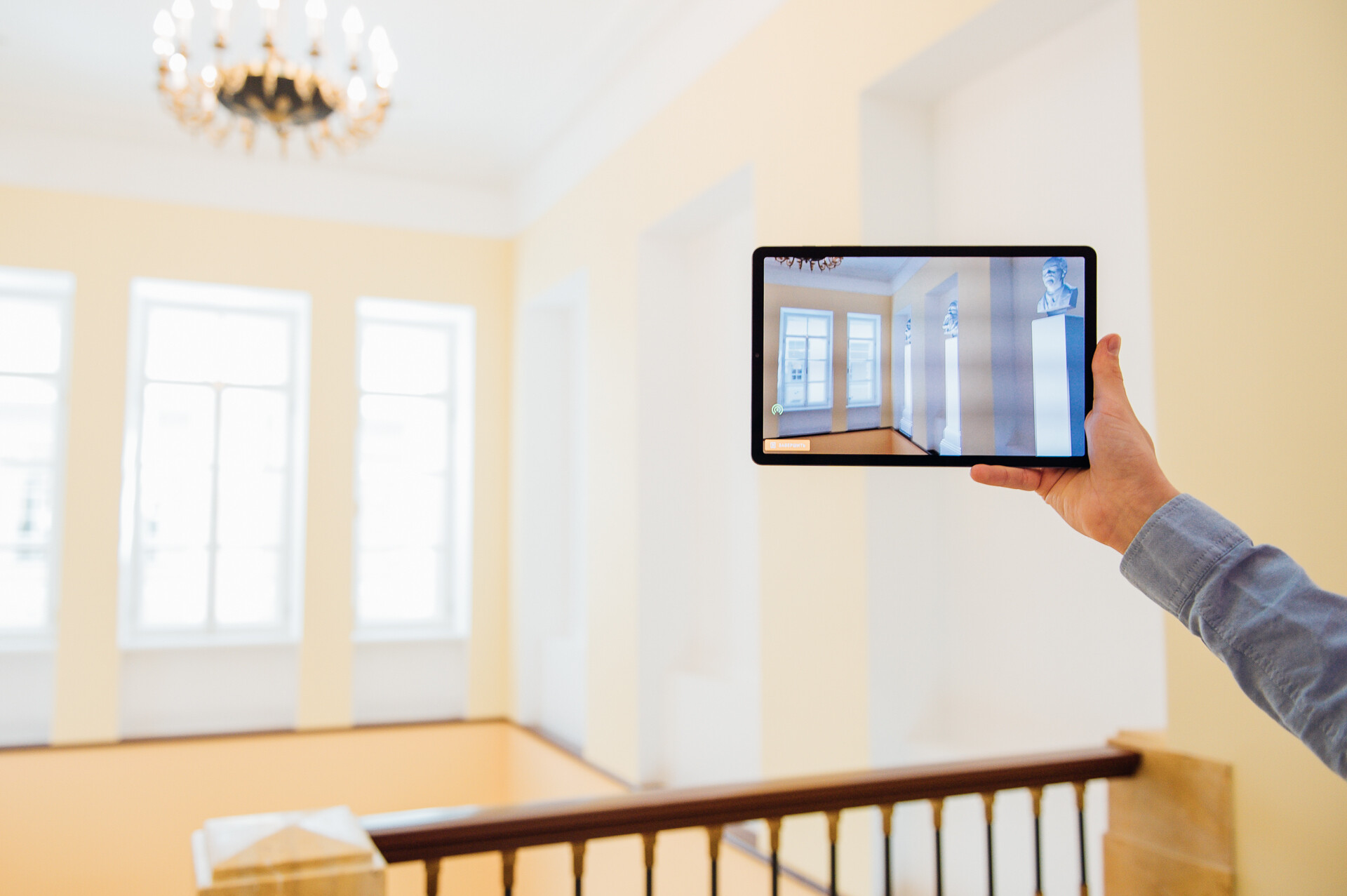 ‘This project is very modern in terms of technology’, commented Alexey Rolich, project head and Leading Engineer at the MIEM HSE Laboratory of 3D Imaging and Computer Graphics, ‘It uses markerless technology, which is a very recent trend in AR. It means that the user doesn’t have to download any QR codes or markers: they simply walk around the building, check out the images, and read and listen to the accompanying text’.

At the same time, there is plenty of scope to improve the project, both in terms of technology and content. This student project is only the first stage of the guide of the Durasov House, which is being created as part of the University Open to the City project. 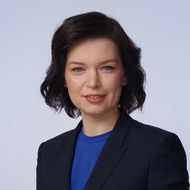 When we were opening the new HSE Pokrovka building in August 2019, it struck me that this building—which has a rich history and is one of Moscow’s best examples of late classicism—could become a very interesting intersection of the interests of our students, teachers, parents and Moscow residents. The idea was further developed once we started discussing augmented reality opportunities with the MIEM team. This was followed by several more consultations. We’re grateful to the Museum of Moscow, which gave us an archive collected by Durasov House restorers, and to the staff of the Pushkin Museum and the Shchusev Museum for consulting with us. We are particularly grateful to Vladimir Opredelenov, digital director of the Pushkin Museum, for his technology advice. The AR guide started out as a student project and has ended up a high-quality digital product, which makes me very happy and a little surprised. It’s a good example of project-based learning, something that HSE has been promoting extensively in recent years. The project presents multiple educational opportunities for students of humanities, urban development and computer science. Visitors to the university can now immerse themselves not only in our present, but also in our past thanks to this advanced, well polished portal.

Project head Alexey Rolich is currently putting together a project and study group to develop the project further.

The rich history of the Durasov House offers lots of inspiration for new content, such as the day-to-day lives of Agrafena Myasnikova (Durasova)—heiress of Ural factory owners—and her husband, retired brigadier Alexey Durasov, who commissioned leading architect Matvey Kazakov to design the house.

The White Hall, which now hosts HSE Academic Council sessions, used to be a venue for performances by the renowned serf theatre created by their son, Nikolay.

Another fascinating potential subject is the life of the subsequent owner of the house—Count Matvey Dmitriev-Mamonov—who founded a Masonic lodge (and was later declared insane for this and other eccentricities). 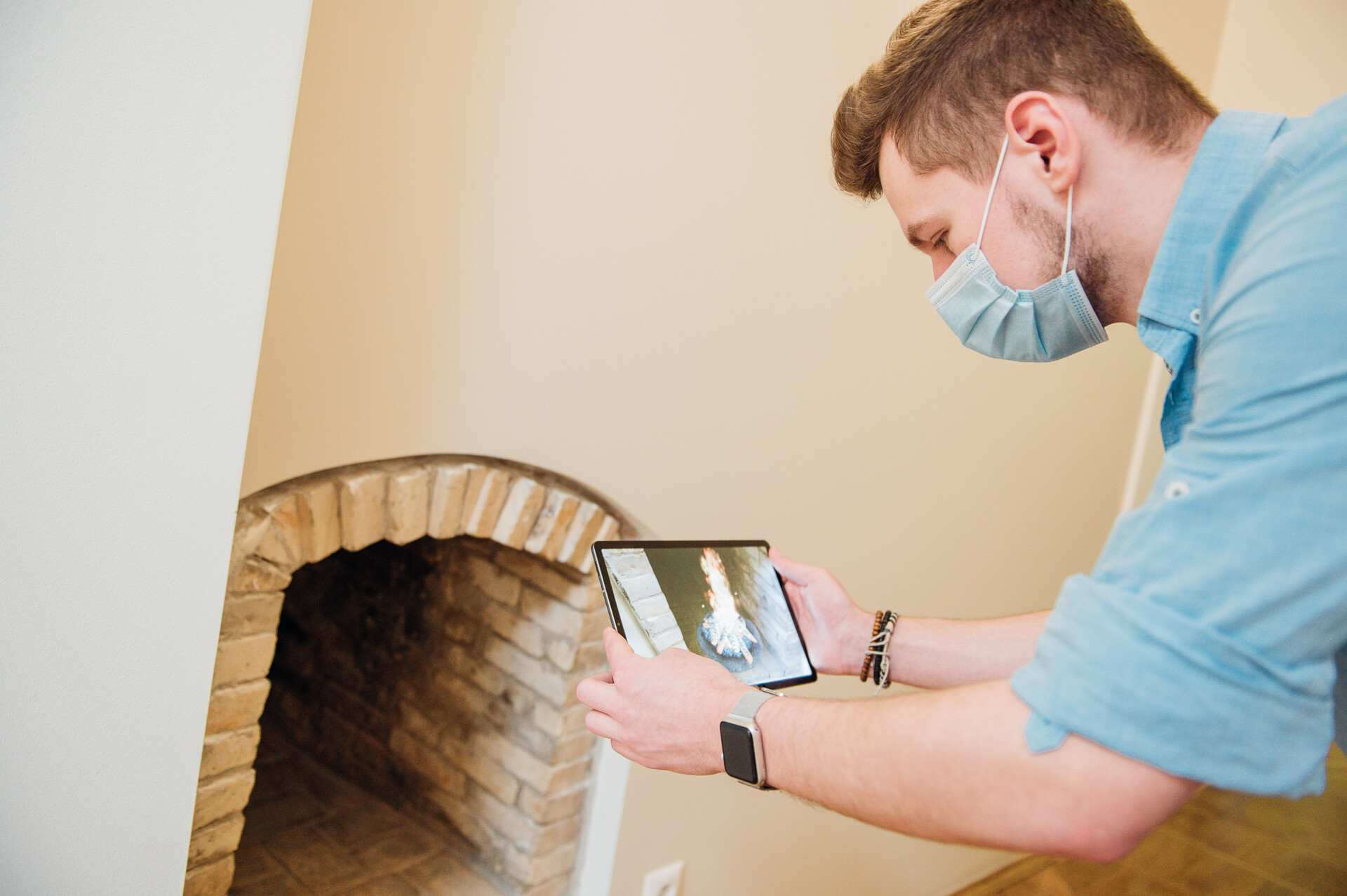 Future versions of the project could also incorporate scenes from the Academy of Commerce, the predecessor to the HSE and the Russian Empire’s first educational institution for merchants (albeit a secondary institution rather than a university.). In Soviet times, the building housed the Kuibyshev Military Engineering Academy, where decorated general Dmitry Karbyshev served as chair of the thesis defence committee.

‘The technology is ready, and we’re planning to create dynamic reconstructions using 3D modelling. We’re going to make the most of the latest capabilities of augmented reality technology’, Alexey Rolich explains.

The project offers a variety of new opportunities for students. MIEM student Dmitry Egorov says, ‘I’m into history, and this project has been a unique one for me. I also want to become part of a team that’s making something socially important and useful to the university’. Pavel Samoilenko adds, ‘My Unity engine skills came in handy, but I also got to learn some Android development skills, since the main app module was developed in Android Studio’. And Marina Firsova says, ‘My teamwork skills are on a whole new level now. This has been my first major augmented reality project, and it’s a great foundation for a future career in the AR industry.’

July 19, 2021
IT
Spotlight
University Life
New Grusha Café
A new café is now open at the HSE building on Malaya Pionerskaya
Research
Selection Begins for Projects on Scientific, Technological, and Socioeconomic Forecasting
Life Style
Where to Grab a Coffee, Have Lunch, or Meet with Friends Near HSE University
We’ve prepared an updated list of cafés, restaurants, and cafeteria around Myasnitskaya, Ordynka, and other HSE buildings in Moscow
Research
HSE Support for Research in 2023: New Bonuses and Competitions
As a result of the need to respond to new challenges, several important decisions have recently been made
University Life
‘I Spend 10–13 Hours at HSE University Every Day, and Half of That Is in the Library’
At the end of 2022, the HSE Library announced the launch of its new ‘Total Immersion’ project. Now, HSE University staff and students can take a tour of all of the library’s internal departments in the Pokrovka building
Events
Party Like an Indian!

All HSE students are welcome to join the Indian programme at the HSE Asia Festival at HSE University. The students and alumni from India are invited to register to be a part of the HSE University Indian Association