To Develop the University Has to Change

20th March 2014, at a conference of staff and teachers at the HSE, Rector Yaroslav Kuzminov gave an account of the results of the 2009-2013 HSE Programme for Development. These are the main points of his presentation. 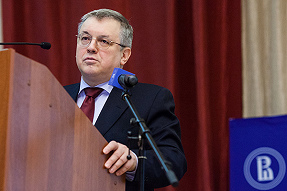 Recently HSE has been building up a full compliment of courses to suit its remit. The HSE now teaches humanities – history, oriental studies, philology and linguistics. It  has opened a joint Bachelor’s Degree with the Russian Economic School and started courses in Urban Studies. By joining forces with MIEM, the HSE has significantly broadened its offer in Engineering. The HSE has also put a major effort into establishing Master’s programmes and now offers more courses at that level than any other Russian university.

A few years ago the government asked the HSE to increase the number of graduates from other universities among the Master’s students to at least 40%, and that has been achieved – (in Moscow it is about 60%).

The marked increase in numbers of students (24,500 in 2013) is reinforced by an improvement in quality of enrolment. The average cross-campus USE grade for non-fee paying students is 80 and above and 87.4 in Moscow. The average grade is very high for fee-paying students too (75 in Moscow and around 70 across campus). The HSE’s high requirements for both fee-paying applicants and those on government grants partly explains the decrease in numbers of fee-paying students (down by 18% in the last 5 years in Moscow). But at the same time the HSE encourages Olympiad participants and in 2013 came second after MGU in the number of school Olympiad winners it enrolled.

The HSE has improved flexibility in courses and broadened choices for students in their educational careers. It was the first university in Russia to introduce education standards which provide academic research seminars for undergraduates from the first year. HSE students have to prove their English language skills in an international standard external exam.

The HSE is also the first Russian university to introduce teaching assistants into the system. By 2020 every teacher at the HSE should have an assistant. Yaroslav Kuzminov said that in universities in the West assistants carry up to half of the teaching load without any harm to the education process.

Research is being integrated into education through the work of the research and project-research laboratories. Students make up two-thirds or three-quarters of the teams. The labs form the basis of the university’s research groups and are growing into major research centres, whose young researchers have already published several articles in leading international journals.

The process of internationalising education continues. Although the number of Double Degree programmes has tripled in five years, the HSE is still lagging behind other universities in the project 5/100 in foreign student numbers. This is partly an objective problem, relating back to when economics and social sciences were seriously undermined in Soviet academia. Foreign students are more easily drawn to studying maths or physics in Russia rather than economics or management. To narrow the gap the HSE plans to increase its share to 10% of all foreign students in Russia by 2020 (currently it’s 2.8%)

But inviting foreign students to English-taught programmes is not the only way. The HSE will attract Russian speaking students from abroad. “We need to work on the Russian-speaking intelligentsia in the surrounding countries”, said Yaroslav Kuzminov. The government has expanded its quota to 500 places for foreign students at the HSE this year. The university is ready to take on all the winners in the first round of school and undergraduate Olympiads conducted in Ukraine. The final round couldn’t happen because of recent events in Ukraine.

Another sore subject is the low level of efficiency of aspirantura/PhD students. Market pressures explain the HSE’s modest figures (good graduate opportunities in business mean no time for research). But the HSE has never had any interest in mass producing dissertations. One sensible way out of the current situation is to widen the ‘Academic Aspirantura’ programme which provides proper funding, grants for study abroad, and the chance to earn by taking part in research projects in the HSE laboratories and institutes. Yaroslav Kuzminov thinks all the faculties will be engaged in the ‘Academic Aspirantura’ in two or three years.

The HSE is trying to reach a wider public for its courses through the internet and the online resource Coursera. The HSE’s first twelve courses already have 100,000 subscribers. 30-40 courses designed by the HSE will be available on Coursera by the end of 2014.

The HSE is going out into the real world as well as the virtual with its ‘Open Lectures in the City’ project which has presented cultural and educational events in various locations around Moscow – from Gorky Park to museums and places of worship. Kuzminov wants the HSE to organise similar projects in St Petersburg, Nizhny Novgorod and Perm.

The amount of research work at the HSE has more than doubled over the period. The market the HSE works in is fairly limited. 90% of HSE projects are in the socio-economic sphere while recently government efforts are invested mainly in developing technology. Even so, the HSE has broadened its presence on the market and the volume of commissions for applied research has doubled.

The university has managed to find new sources of commissioning. While in 2008-2009 almost 60% of commissions came from federal government ministries and departments, now that figure is only 40%. The number of commissions from regional and municipal government bodies has grown by 30% (the HSE is working on several big projects for Moscow and other regions).

The HSE has created what is probably the biggest empirical base of its own in any university in the world. ‘We know that a physicist without apparatus can’t write anything new, and in the same way economists and social and political scientists cannot do serious research without empirical data’, said Yaroslav Kuzminov, ‘Since we have been joined by engineers, we are hoping we’ll find success too in applied physics, materials and engineering. But we need 700 million roubles to modernise MIEMs equipment which, at the moment, dates back to the 1960s’.

In the coming years the university will have to deal with a squeeze in the market. In difficult times companies research budgets are first in line for cut-backs. But the HSE has reserves which will allow it to support research in affected areas. The position with government funding for academic research remains unclear. It has been decided that it will be managed through foundations but in a number of areas it is still not clear how these foundations will work and which projects they will support.

The chances of getting grants from foreign organisations have fallen sharply in recent times (this is not connected with recent political issues). Now each side pays for itself in joint research projects. Although, international cooperation has not suffered as a result – no less than half of the fundamental research projects at the HSE are conducted with foreign participation and the HSE hopes to bring the figure to 80% of those kinds of projects in the future.

In 2013 the HSE had 16 international laboratories and has decided to open eight more. As part of the 5/100 project the number of labs could go up to 30. These are ‘windows on the world’ which need to open in most areas of study at the HSE.

Indicators at the regional branches of HSE look small by comparison, but Yaroslav Kuzminov is convinced that they have the potential to conduct their own fundamental research and to enter regional markets for applied research.

The problems of Russian backwardness in socio-economic research mentioned above mean that Russian economists and sociologists don’t get published often in international journals (not to even mention citations) and they are poorly indexed in databases like Web of Science and Scopus. The HSE and RES are barely even presented there.

The HSE’s first journal ‘Foresight’ was indexed on Scopus in 2013, and two more journals will be on the database in the near future. ‘We are simply outside the base, and that is something we need to change’, said Rector Kuzminov. He thinks that in five years the HSE will have entered the global ratings.

The HSE supports its staff in publishing with resources from the Academic Fund. Financing for academic pay rises and grants has grown at least 5 times and amounts to half a billion roubles. These days every research fellow and teacher in the HSE can choose whether to teach or do research or expert consulting and know what kind of increase in income it will bring him.

More than 50% of HSE teachers work under effective contract conditions. Another 20-25% are earning extra on Further Vocational Education programmes or in applied research. ‘This is a worthy path but we need to make sure that our colleagues don’t neglect their primary obligations’, Kuzminov remarked.

Making the transition to effective contracts and international recruitment procedures will strengthen the selectiveness of staff policy at the university. This is already happening. In 2013 the number of professorial teaching staff went down for the first time. Some teachers are now working with the HSE on conditions of civil agreements. At the moment only 300 teachers are working exclusively at the HSE, that’s less than 10%. In the coming years all staff will go over to effective contracts.

This summer the HSE will launch a national recruitment drive which will be open to anyone. There are already one and a half times more applicants than places. This competition is the first of its kind in Russian universities.

The HSE set itself several tasks in the realm of finance: to increase government funding for fundamental research, to gain money to develop in the national research university framework and to win the competition 5/100. To a greater degree the HSE managed to meet budget growth with non-budget income and in 2013 that sum reached about 4.5 billion roubles. Almost 23% of income goes into investment in developing the university.

Over the next five years the HSE must increase its endowment and attract funding from new patrons. The larger departments must increase their economic efficiency and introduce KPI, having received new financial powers. Education programmes will be financed in a standardized way, not ad hoc as they sometimes are at the moment.

A process of enlarging the faculties has begun at HSE. As Yaroslav Kuzminov said, creating big faculties isn’t an attempt to take away control from the existing ones but to transfer some of the resources and control to the direction office on a level where they will be at the disposal of a strong collective leadership. Creating big faculties is not about destroying the existing teaching programmes – philologists and linguists, combining into one big faculty with historians and other humanities professors won’t be changing their professional interests to liberal arts. Genuinely new programmes will emerge that are in demand and relevant.

The faculty restructuring must be completed before the beginning of the next academic year. ‘We will work closely on it with our colleagues from the faculties involved’ said Yaroslav Kuzminov.

Author: Oleg Seregin, March 21, 2014
All texts by
On Campus Officially 5/100 programme HSE Programme of Development
Spotlight
News
‘We Showed That the World Can Be Adapted for Everyone Who Lives in It’