This year has seen the addition of several new courses on offer for the first time. One of HSE’s biggest names and an international expert in the field of social and economic systems, Professor Fuad Aleskerov, Head of the Department of Mathematics at HSE, is teaching a course entitled ‘Advances in Decision Making Theory and Applications’, which focuses on topics such as decision making, aggregation models, voting manipulating and organizational power distribution.

‘We make decisions every day and every hour’, says the professor. ‘For example, which summer school to choose, which pullover to buy, where to go on vacation. The course presents the core concepts of rational and efficient individual and social decisions, including political decisions’.

Professor Aleskerov’s lectures have been met with considerable enthusiasm. Sixteen students enrolled in his one-week course, and by all accounts, it should be longer. ‘It’s so exciting to be learning with someone like Professor Aleskerov’, said Armin Seimel, an undergraduate student from the University of Duisberg-Essen, Germany. ‘One week is just not enough. I know that there’s so much more we could learn from him – we are only just getting a glimpse of what he has to offer’.

Armin’s opinion was echoed by Natalia Polakova, a Slovakian student from Masaryk University in the Czech Republic. ‘Professor Aleskerov has an international reputation’, she said. ‘He has worked with some of the US scientists who wrote the papers that I relied on in my studies and my research. Some of his papers were proofread by economist and Nobel Prize winner, Ken Arrow. It’s such a privilege to be in his classes’. She added that the fact that there are only 16 students in the class has also worked to their advantage. ‘It’s a small group of people, so it’s really communicative. We discuss a lot and get to interact closely with the professor’.

In addition to the teaching, the students are also enjoying the course material. ‘I wrote my master’s thesis on what we have been talking about. It’s extremely relevant’, explained Natalia. As for Armin, he will return to Germany to continue his studies and will begin with Game Theory. ‘Professor Aleskerov’s course has been the ideal introduction to Game Theory, giving me an insight into the applied side of it. I’m really excited about getting into the topic when I return home’.

Another new course, ‘Economic History of Russia: Features of Economic Development’ is being offered by Associate Professor Alexey Rakov. Covering a timespan between the Russian early state during the period of feudal fragmentation to the end of the USSR, the course aims to identify the turning points, reveal endogenous and exogenous causes of reforms, and analyze the key aspects of Russian economic history, providing students with a clear understanding of certain features of Russian history as well the correlation between Western and Russian economic development.

Professor Rakov, who has been teaching economic history at HSE since 2011 and has been selected by HSE students as one of the best teachers in the last five consecutive years, explains that his summer course is tailored tointernational students who are more interested in learning the features of the Russian economy and its development within the world trends, as well as what he terms the ‘Russian genetic code’ and other peculiarities that may influence the mentality in the form of traditions or other phenomena.

‘This means that I have to direct the students to these phenomena first so that they could actually understand all circumstances in a better way with a historical context fully presented, while teaching Russian students as a rule I have no need to do so, keeping in mind that my students in many regards are probably already aware of such phenomena and need just an overview’, Professor Rakov says in explaining the difference between his new summer course and his regular course on economic history. ‘Also, my Summer University course duration is just 16 days, not four months like the course in Russian; thus, we have four days with classes per week, which is quite a lot. In this sense, I should be very precise giving homework so that my international students could be able to handle it in time and not be angry with me’.

Indeed, keeping students interests at the centre of his approach has been key to Professor Rakov’s recognition each of the last five years as one of HSE’s best teachers for his course offered to first-year students in the Faculty of Economic Sciences. Whether it’s taking feedback and making adjustments to course material or finding alternative ways to encourage student participation and assess their work, he is known for being transparent, clear, and as flexible as possible within the system he’s established. He is also known for making his courses engaging and interesting, doing everything from using intelligible metaphors, jokes, interesting cases or poems to being available for online support.

‘I have to make the course interesting and attractive to all students, which means that just giving boring lectures or seminars is never enough. During the seminar, I tend to transfer the discussion into an intellectual debate, provocative dialogue in a way that aims to help students better understand my thoughts and to build up theirs in a logical and coherent way using causality’, Professor Rakov says.

Christopher Brooks, a student from the North Carolina School of Science and Mathematics, responded enthusiastically about how much he is enjoying the course. ‘I chose this course because I liked economics and I wanted to try out some more classes. I knew that I was going to spend the summer in Russia, so I took this course. So far, I really like it; what we have been doing has been very interesting, but sometimes it's very difficult for me to read in Russian’.

Emilio Moreno and Salvador Quintanar, both of the Instituto Tecnológico Autónomo de México, chose the course given the lack of exposure to Russia studies in their home country. ‘It is a country that we do not study a lot in Mexico, so getting to know the history and the way the economy and society have been developing is interesting’, says Emilio. Salvador added that the course has been a good opportunity to get to know another culture and history and to discover parallels between Russian and Mexican history’.

Clearly, the Summer University is attracting some top students from around the world. Amin received a scholarship from the DAAD (German Academic Exchange Service) to attend. The DAAD is one of HSE’s major international partners helping to finance and support student involvement in the Summer University. Natalia is also the recipient of scholarships from her home university and the Tatra Banka Foundation, which have covered her tuition and accommodation in Moscow.

A busy city, with students longing to come back

While most Summer University students have no doubt been enjoying the celebrations surrounding the FIFA World Cup across Russia, these rather unusual circumstances aren’t to everyone’s taste. ‘I rather wish there was no such thing as FIFA World Cup!’ exclaimed Natalia. ‘Moscow is so busy, it’s very intense. We have tended to stay close to the HSE campus, which is still very central but somewhat calmer, with plenty of places nearby to relax, eat and hang out with the other students. The campus is located in a great area with a student vibe’.

Despite the intensity of the World Cup, Amin and Natalia wish they could stay longer than just one week, in order to get to know the other students better and to experience more of what Moscow has to offer. ‘We were looking forward to going on a pub crawl with everyone’, laughed Natalia, ‘but we’ll hopefully be back next year to do that’.

Professor Aleskerov expressed his positive impressions of his students. ‘I am very impressed with the general level – I wasn’t expecting the students to be as strong as they are. They ask some excellent questions and we have had some very thought-provoking discussions as a result’. He agrees with his students’ view that one week hasn’t been long enough to delve deeply into certain topics and shares their desire to extend the course. ‘Hopefully,’ he said, ‘there’ll be an opportunity at next year’s Summer University to do just that’. 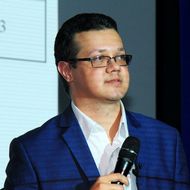