The etymology of the word 'kulishki' is not entirely clear, but the most common definition of the word is a meadow that results after a forest is cleared. This was actually the location of Vasilevsky meadow, which lay in the flood plains of the Moskva, Yauza and Rachka rivers. The Rachka flowed along Salyanka Street, but is now enclosed in a pipe. 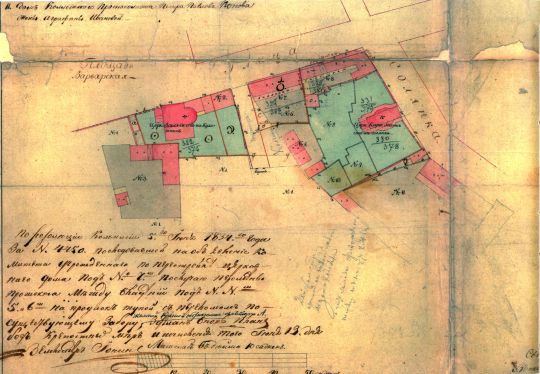 After the victory of Dmitry Donskoy in the Battle of Kulikovo in 1380, the name kulishki became known throughout all of Muscovy. In honour of the victory and in memory of fallen soldiers, Dmitry Donskoy commissioned the large Church of All Saints, which was given an address postscript (Kulishki), as was custom at the time. The remains of Russian soldiers were brought from Kulikovo field and buried within the walls of the wooden church. The Church of All Saints in Kulishki, which was rebuilt in stone in 1488, was the first church to serve as a monument to Russian troops. Later during a battle against invaders in 1612, the church, which is located far from the Moscow border, was badly damaged. In 1687-1689, it was rebuilt almost entirely from the ground up, and a bell tower was added. The building of the late 17th century with its four-tiered bell tower is the building that still stands today.

Church of All Saints’ domain, as well as the territory of building 4, extends to the east and south. For several centuries, small wooden buildings and stone houses have come and gone, but the location is now occupied by building number 4, which lay empty until at least the middle of the 19th century.

This was the result of a number of fires. There were several in the mid-18th century alone that were so serious as to warrant the following entry in the Russian chronicles: ‘...at this Church of All Saints, the parish yards have all burnt with no remains.’ Fire devastated Kulishki again in 1812, and the church itself also suffered. Recovery was slow, and the church, along with its possessions, was transferred to the neighbouring Church of Saints Cyrus and John, which had been located on Solyanka Street, but has not been preserved. 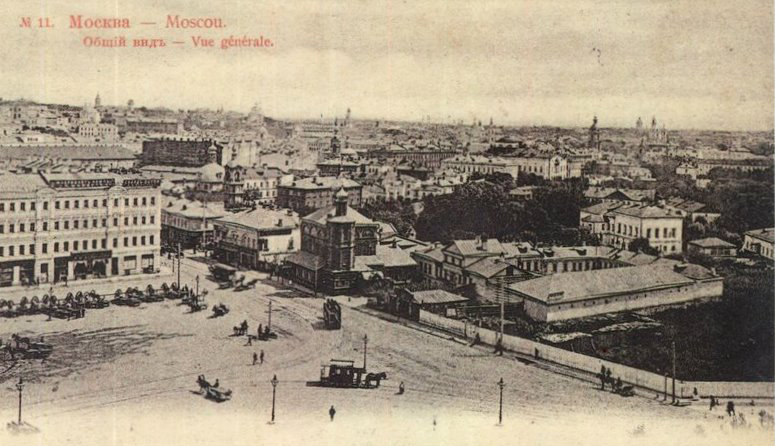 The Church of All Saints in Kulishki was rebuilt by 1829, but its former grounds were returned only in 1845. The church’s recovery time almost coincides with the emergence of the area’s new name. In 1819, the land of the future square began to be cleared of unnecessary buildings and military fortifications of yore. By 1823, Moscow had gained a new square – Varvarskaya, named after the nearby Varvarka Gates. The area surrounding the church also received an alley, Solyansky Tupik, which still exists today. Our very building number 4 is actually on Solyansky Tupik, not on the square. As shown by Khotev’s 1852 Atlas of Moscow, various buildings, mostly wooden, appeared on the right side of Solyansky Tupik in the middle of the 19th century. The situation had not changed by the end of the century.

At the turn of the 20th century, the standard look of the area gradually began to change. The church sold part of its grounds, and a four-storey building facing Solyanka Street was erected almost precisely where house number 4 is currently situated. For unknown reasons, however, the building did not last long, and the remaining area behind the church was covered by a garden.

The onset of the 20th century was marked by large construction projects for old Kulishki. In the early 1900s a certain Kolchina (presumably) acquired the land next to the Church of All Saints in Kulishki and began to build what was then the largest apartment building on the church’s former domain.

The incredibly popular Russian architect Nikolay Zherikhov, who was in high demand at the time, was invited to design the building. In 1902, he successfully carried out his first architectural project – the apartment house of G. Broydo on Ostozhenka Street. From that time until his death in 1916, Zherikhov was a recognized expert in Art Nouveau, having built the extravagant apartment buildings on the central streets of the capital. In just 14 years of active work, the architect built 46 buildings commissioned mostly by wealthy merchants.

The apartment house on Solyansky Tupik was supposed to be of impressive proportion – the architect had suggested various extravagant touches – but it seems the customer did not have enough funds. Commissioned by Kolchina to build the apartment house, Zherikhov was faced with the complicated task of combining wishes with real possibilities. The architect succeeded, and construction was completed in 1909.

The side of the massive L-shaped building overlooks the square. It is practically devoid of windows and serves as a sharp contrast to the grand façade, which is also visible from the square. The overall design of the house is very reserved and rigid, but there are features of modernity visible in Zherikhov’s creation. The architect used his favourite technique of adding on slightly protruding corbels that are uniformly distributed along the façades. They are the main architectural ornament and supplemented by the varied decor of the windows.

The main façade, which is where the building’s entrance is located, particularly stands out; the windows on the flat portion of the façade differ from the windows on the avant-corps by width and architectural elements. Typically, Zherikhov’s buildings were lavishly adorned with stucco and sculptures – for example, the building on the corner of the Malyy Mogiltsevskiy Pereulok and Plotnikov Pereulok or the Vilner building on Staraya Basmannay. In Kolchina’s building, however, he allowed himself only a small sculptural joke. Located on a wide tripartite window on the fourth floor are two identical faces of a mythological creature resembling a bearded Goblin.

Zherikhov obviously had more opportunities to express his passion for Art Nouveau when working on the building’s interior. The house was built as a residential building, and no shops or offices were supposed to be in it. This is why one could get to the apartments directly from the spacious main entrance on the ground floor. In addition, the entryways into the apartments were situated under beautiful archways, above each of which was a stucco medallion with the apartment number. One of such medallions, number 3, has been preserved to this day.

Further through the archway one can find the main staircase. This part of the interior architecture is what has been preserved best.

The wide spiral staircase made of Carrara marble smoothly makes its way up to the fifth floor thanks to the triangular shape of the steps.

But the most characteristic and attractive detail of the Art Nouveau-style interior is the cast-iron railing on the staircase. It has been fully preserved. The detailed design of the railing is fairly rigid, but elegant and light all the same. The railing is composed of sections of cast iron with rhythmic repetitions of straight vertical lines fastened at the top by a beautifully curved and downward facing arc. The railing extends upwards, smoothly mimicking every curve of the spiral staircase. Together with the marble steps, it completes the magnificent architectural ensemble.

The House on Nogina Square

Moving into the new building, tenants could hardly have been pleased. In two years, rapid construction would begin right under their windows. On the square to the right of the Church of All Saints in Kulishki, an enormous building for the Delovoy Dvor was erected, as was a hotel just several meters from building number 4. Merchants who arrived to trade at the Delovoy Dvor stayed at the hotel and quite rarely behaved themselves properly.

Building number 4 and the walkway to the neighboring building. Photo from 1980-1985.
Source: Oldmos.ru

The HSE has been renting the building since 2012.