The new HSE complex on Pokrovsky Boulevard is bordered by Durasovsky Lane to the north and Vorontsovo Pole Street to the south. Over the years, the owners of the buildings have changed, and the buildings have changed along with them: at the beginning of the 19th century, the buildings were occupied by wealthy heirs, after which they were transferred to the hands of a secret society founder, academics, engineers, and military servicemen. Read on to learn about Pokrovka and its owners through the past two centuries.

At the end of the eighteenth and the beginning of the nineteenth centuries, the extensive estate properties were located between Vorontsovo Pole and Pokrovsky Boulevard. The largest of them belonged to the foreman Alexei Nikolaevich Durasov, who married a wealthy heiress of a mining plant fortune. The buildings belonging to Durasov stretched along the road near the White City, which was previously obscured by the fortress wall. The main building is now Building A.

According to the historian Pyotr Sytin, the Durasov House was built in 1801 by M.F. Kazakov and connected to the outbuildings by a long gallery. Historians estimate that the building was built at the end of the 17th century out of two preexisting structures that were united by an extension on the side of the boulevard. However, opinions differ with regard to the architect: there are no direct indications that it was Kazakov who designed the estate. Draft sketches of the building can be found in the second album of the extent ‘Kazakov albums’, which are housed in the Shchusev Museum of Architecture. In these albums, Kazakov collected drawings of the most prominent Moscow buildings, including those that he himself designed. 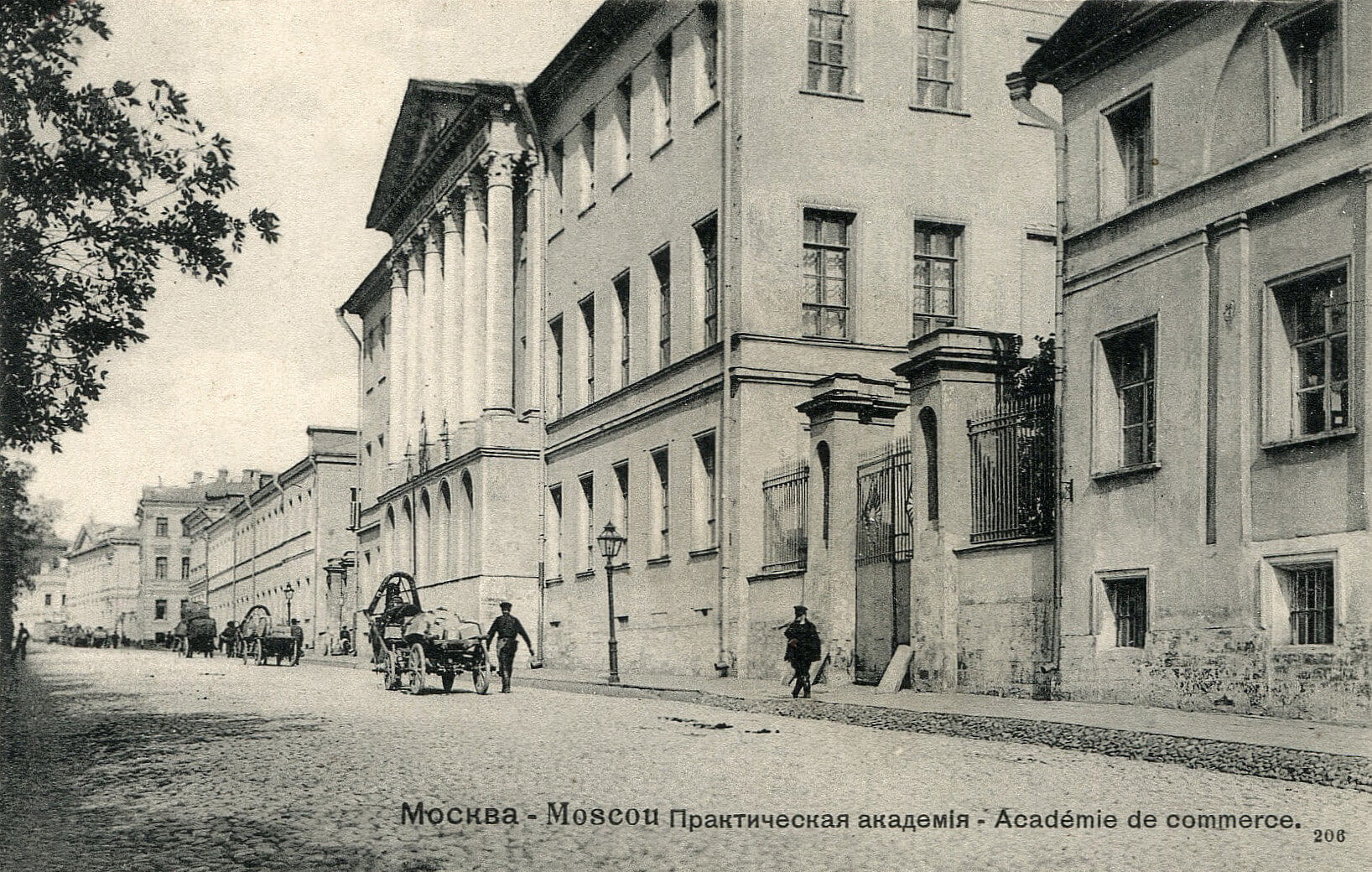 Moscow. The Academy of Commerce, 1900
PastVu

When the French retreated in 1812, the Durasov House suffered damages in the famous 1812 Fire of Moscow.

In 1825, the estate was passed onto Count Matvey Dmitriev-Mamonov, an active participant in secret societies, who, due to his refusal to swear allegiance to Nicholas I, was suspended from the service and declared insane. He spent the rest of his days at the Vasilyevskoye Estate, known as ‘Mamonov’s Dacha’.

In 1839, the Durasov Estate was purchased by the Academy of Commerce, which was founded with the aim of providing a vocational education to children of local and foreign merchants, honorary citizens, and city tradesmen. The Academy did not occupy the purchased buildings, however, until 1847. 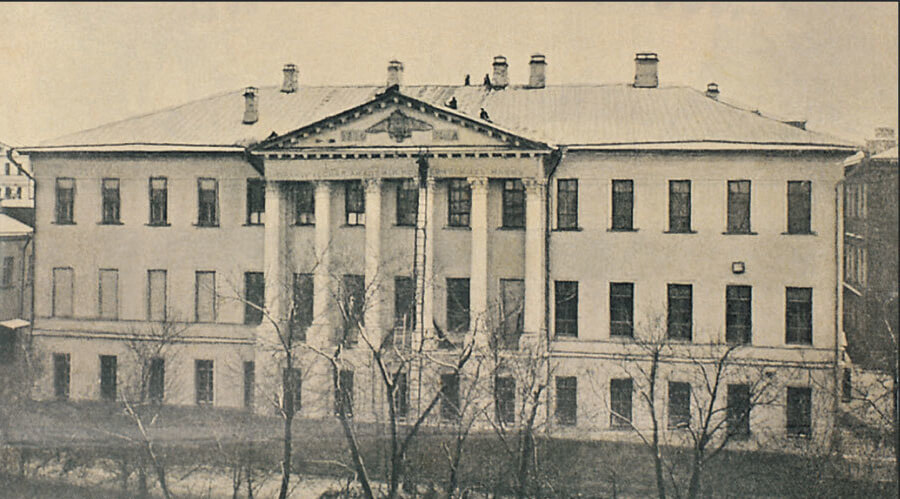 Many prominent public figures of the late 19th century received their education at the Academy, including members of the Ryabushinsky dynasty and leading Moscow entrepreneurs. One student of the Academy (though not a graduate) is Alexey Abrikosov, founder of the Abrikosov and Sons Factory and Trade Partnership, nowadays known at the Babayevsky Company, Russia’s oldest confectionery manufacturer.

Despite the use of the estate as an educational institution, the structure remained unchanged until the mid-1850s. In 1854, the main manor house was connected to an arena building (now Building L), which was built at the end of the 18th century. Soon the arena area was converted into classrooms. 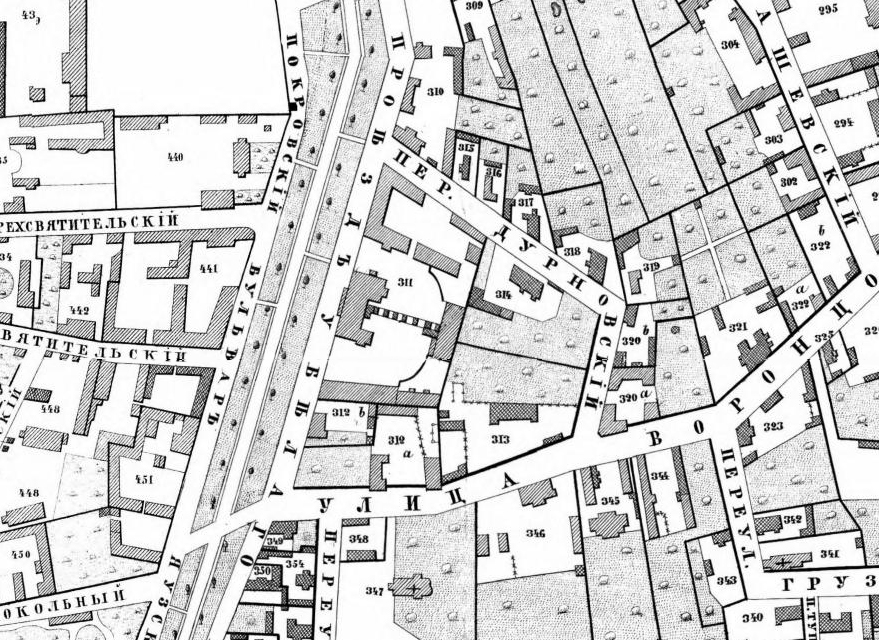 Now the entire layout of the building has been adapted for educational purposes. The third-floor windows have been elongated, the ceilings have been raised, and a cast iron staircase has been built to connect the second and third floors.

The northern outbuilding (Building M) of the manor was built in 1784-1792. Subsequently, it was expanded inward, rebuilt several times, and, in 1884, it was expanded to the western edge of the property grounds. In the 1920s, a third floor was added to the outbuilding. Later, in the 1960s and ‘70s, a three-story building was attached to it from the courtyard facade. 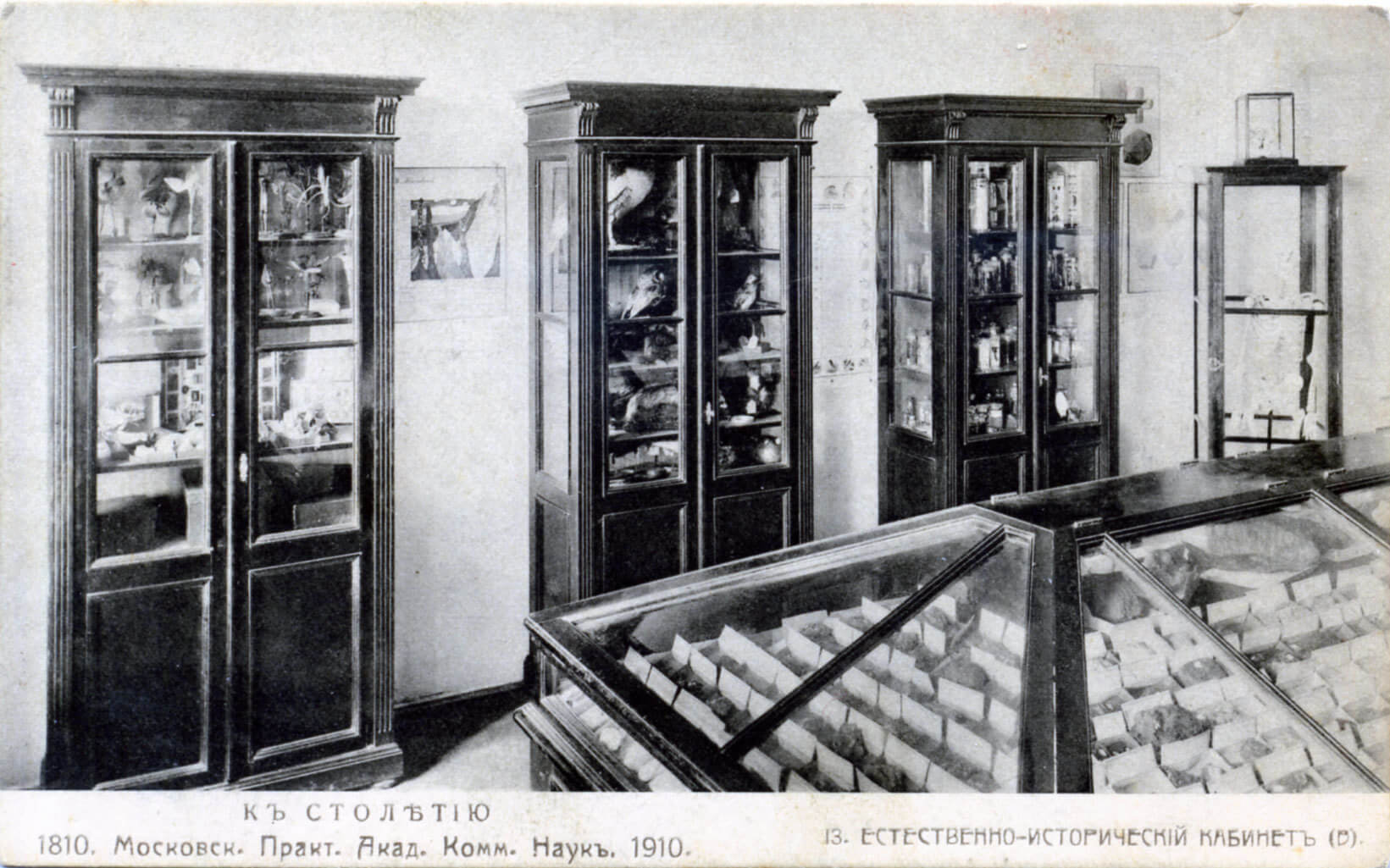 Postcard in honor of the 100th anniversary of the Academy, 1910
PastVu

In 1892, under the direction of the architect I.F. Chervenko, Building K of the Academy of Commerce was built, and a 4th floor was added to the structure in 1931.

In 1918, the Academy of Commerce was liquidated.

Beginning in 1932, the Durasov House housed the Kuibyshev Military Engineering Academy. During the prewar period, Dmitry Mikhailovich Karbyshev served there as chairman of the thesis defense committee.

Diagonally across the boulevard sits a residential building of the Academy, designed by architect I. A. Golosov. This building, adorned with sculptures, catches the eye of nearly all passersby. Students and instructors of the Military Engineering Academy resided there. Part of the building was erected before the war, and rest of it was completed in the late 1950s.

Building G was built as an academic laboratory building for the Academy in 1931. Soon the construction of the second building began; now it is building D. For this, the outbuilding of the Durasov Estate was dismantled. In 1950, the main facades of both buildings were decorated in a constructivist style.

In 2006, HSE University acquired the complex. With the complex comes its history—a history that the University will strive to preserve.