In September 2015, after undergoing a major overhaul, part of the HSE St. Petersburg campus opened at 3 Kantemirovskaya St., Building 1A, becoming the home of the School of Economics and Management. This building was previously the location of a weaving mill that had had several names and owners over its more than 100-year history.

The Nikolskaya Textile Mill, owned by the joint-stock company Voronin, Lyutsh, and Chesher, was built in the 1890s on the Vyborg Embankment. This resulted in one of the company’s buildings later housing the HSE St. Petersburg School of Economics and Management.

Construction of the Nikolskaya Textile Mill began on a vast piece of land to the south of Flyugov Lane, the former Kantemirovskaya St. The architect behind the initial building for the spinning division, which includes a forging shop and chimney, was the civil engineer Vasily Kosyakov, while Fyodor Karlovich von Pirvits participated in the design of the main building and workers’ quarters. Later, in 1907, the building was constructed by the architect Katz-Kapelinsky.

The mill had initially belonged to the British subject Osip Chesher, a merchant in Yekaterinburg. By the start of the 20th century, the mill had already become part of the Voronin, Lyutsh, and Chesher concern.

The concern included six enterprises that were located all throughout Petersburg. The Vyborg and Rochensalm mills turned cotton into yarn that was mostly shipped to the Nikolsk and Rezvoostrov weaving mills, where so-called ‘severe fabrics’ were produced. The fabrics were processed further, bleached, dyed, and sanitized, which made them glossy. This was done for chintz, satin, flannelette, madapolam, and more.

At the end of the 19th century, the number of workers at the mill reached 1,200, and in the early 20th century, the plant became one of the most important enterprises in St. Petersburg's textile industry.

Right before the First World War, the Nikolsk mill also started producing upholstery fabrics. The products found consumers not only in the northwest region of the Russian empire, but also in Central Russia, Bukhara, and Samarkand. During the war, the plant produced material to sew soldiers’ uniforms.

In 1919, the company was nationalised before being renamed the Vyborg Cotton Mill in 1922 and the Red Lighthouse (Krasny Mayak) in 1923.

After being nationalized, in 1927 the artist and architect S. Ovsyannikov and the engineer K. Vilyayevsky from the organisation Leningradtextile developed new renovation and plot plans for Red Lighthouse in Vyborg. The buildings belonging to the plant took on a constructivist design and were supposed to be covered in glass to ensure better insolation and to save on energy.

In that same year, the Moscow architects Y. Popov and D. Razov came up with designs for a theatre and club for workers at the textile plants, and this was also carried out in line with the idea of developing and improving the quality of life for workers not only by organising daily life and work, but also by factoring in relaxation, education, and the formation of an orderly and developing atmosphere for daily life.

The plant was restructured several times in the 1930s before becoming a state-union plant, still named Red Lighthouse, in 1940. 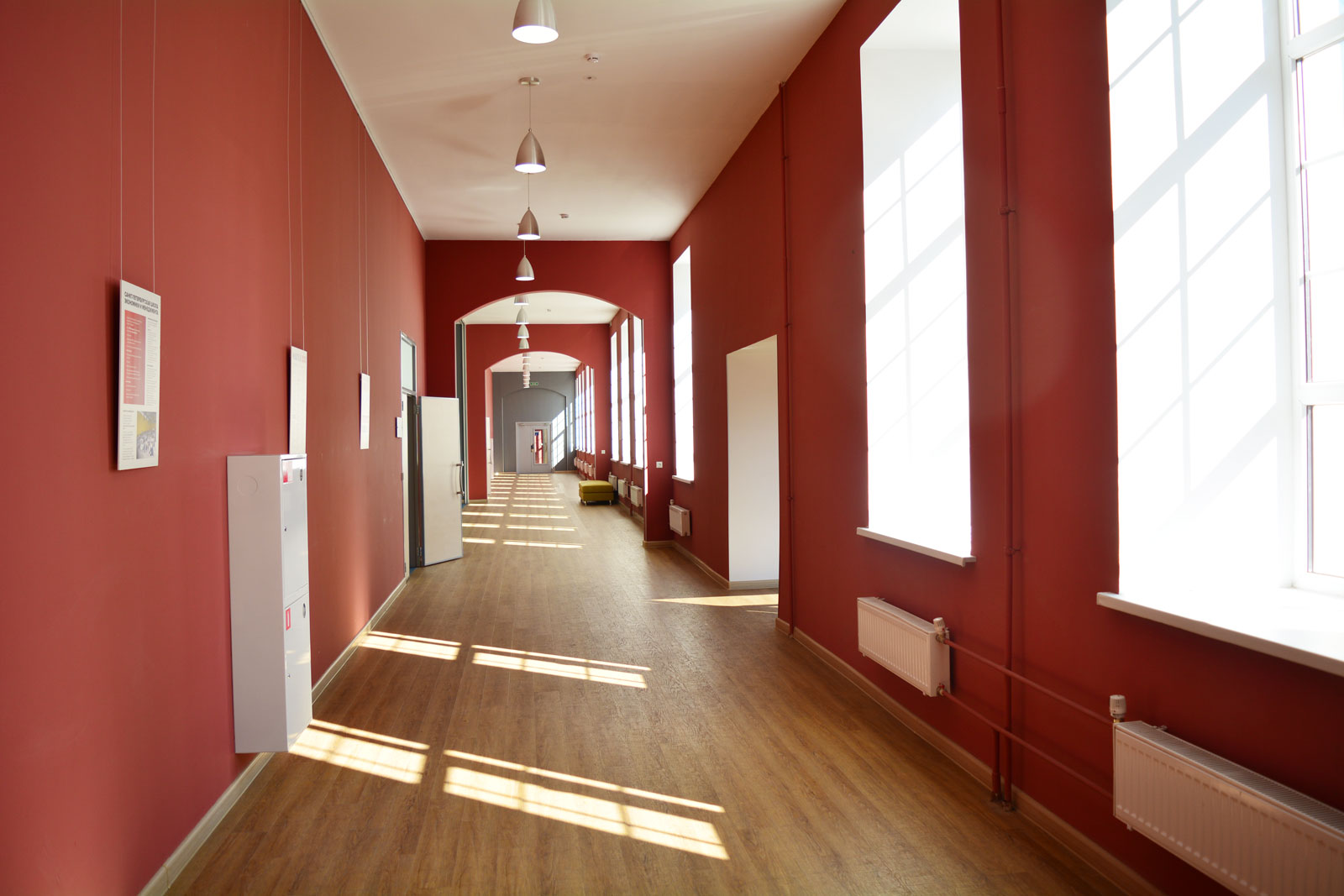 During the Second World War, the mill produced camouflage nets, as well as fabrics for clothing, linen, and uniforms. In the post-war period, the plant started finishing an entire range of cotton fabrics produced by other mills in Leningrad. In the 1960s, the enterprise acquired the technology to dye synthetic and mixed fabrics. The plant’s products, like in the imperial period, were distributed across the entire country and even exported. In 1969, the mill was awarded the USSR Badge of Honour for high production figures in the industry.

It was just a few decades later, in 1996, that the mill would declare bankruptcy and cease production.

In 2001, the building of the former fabric mill was named a cultural heritage site and given to the St. Petersburg Higher School of Economics in 2008.

The building's reconstruction began in 2013 and lasted until July 2015. Renovations were carried out by LLC Baltstroy along with LLC Vega, an architectural restoration company.

During the project, the building's façade was restored and the historic window art preserved. The towers’ shingles, as well as the cast-iron columns on the building, were completely restored.