On February 26, the Director of the HSE Institute for Industrial and Market Studies, Andrei Yakovlev, celebrated his 50th birthday. 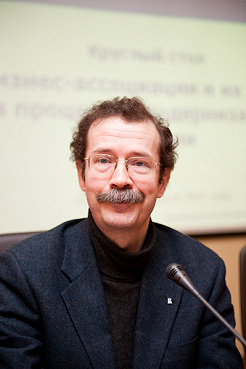 Professor Yakovlev has been with the Higher School of Economics since the university first began, and he has made an enormous contribution to what HSE is today, particularly in regards to research. For a long time, Mr Yakovlev served as the university’s Vice Rector, and he is currently one of the leaders of the programme committee for the April Conference. In addition, Andrei is the Director of one of HSE’s oldest research centres – the Institute for Industrial and Market Studies.

Andrei Yakovlev has been involved with industrial research since his days as an undergrad in Moscow State University’s Economics Faculty, and his thesis was on his research in the field. It is also important to note that at the end of the 1980s, Mr Yakovlev was among some of the last students of Evgeny Yasin before Yasin went on to work for the government.

In the early 1990s, Professor Yakovlev headed the Gaidar Institute for the Economy in Transition. At the time, the Institute housed the first buildings belonging to the newly created Higher School of Economics. Andrei Yakovlev began working for HSE in 1993 – initially alongside his position at the Gaidar Institute and finally as a member of the group who ultimately determined the direction in which the university would move over the next several years. ‘We had an idea and a strategy at the time. There were good people surrounding me, the salary was competitive, and there were opportunities for career growth, including in the field of academia,’ Yakovlev notes in a book dedicated to HSE’s 20th anniversary.

Aside from his administrative responsibilities (he was responsible for the research block and for supporting publication activities, and he even headed the financial committee), Mr Yakovlev laid the foundation for HSE’s research on industrial policy and corporate governance. The Institute for Industrial and Market Studies was formally established in 1997, but empirical research in the field actually began at the Institute’s future laboratories some three or four years before.

Andrei Yakovlev is famous for his discoveries and direct nature. But at the same time, he is someone who knows how to listen to other points of view and carry out a true dialogue. His high level of professionalism, as well as his reputation among colleagues, is confirmed by the fact that in October 2015, he was elected President of the Association of Independent Centres of Economic Analysis (ARETT), which brings together Russia’s top research centres in the field of economic and social policy.