The many different buildings that come under No. 40, once comprised two properties. The first (eastern) property, known from the early 18th century, used to belong to a merchant and silk factory owner, V. M. Yevreinov. The larger western property belonged to the industrialist trader I. M. Poluyaroskavtsev.

During the mid-18th century, both properties were purchased by the major industrialist Nikita Akinfievich Demidov. At the time, most of the buildings were small, fragile and only one storey high. One of them, next to sub-building 1, remains to this day, though highly altered. These are the Blumentrost Chambers (no. 40, building 4), also once known as the Doctors’ Building. Lavrentii Alferovich Blumentrost was a German doctor in the service of Tsar Alexei I, and both his sons served the royal court in the same capacity. Their chambers were originally built in the 17th, and then rebuilt in the 19th century . The latest reconstruction in 2000, left virtually no trace of the original facade. 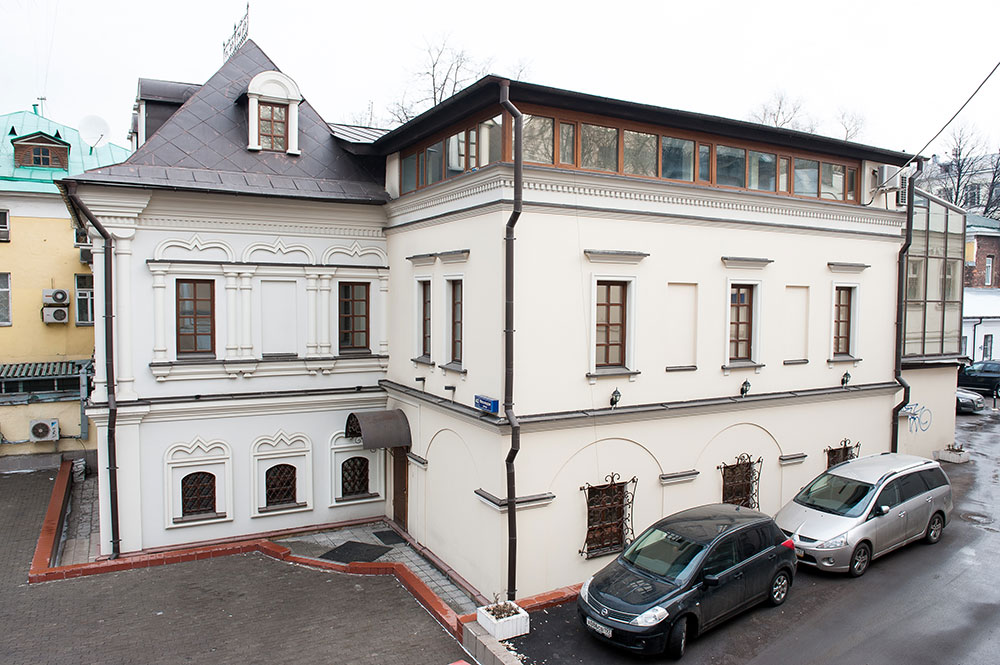 In 1789, the large Myasnitskaya property was bestowed on Demidov’s son and heir, the privy councillor Nikolai Nikitich Demidov. A wealthy man to begin with, he became even more so after marrying Yelizaveta Alexandrovna Stroganova. Not long after the wedding, he left his job to travel abroad. Upon his return to in 1806, Demidov turned to his many properties in St Petersburg, Moscow and the Urals. His attention was mainly focused on his Urals factories, but some changes were made on Myasnitskaya as well. Thus, between 1808 and 1910 he had a sturdy two-floor house with a mezzanine built facing the street, using designs by the architect Dmitrii Andreevich Tyurin.

In 1810, Demidov was sent to Florence as an emissary. Having spent vast sums on charity throughout his life, patronising the arts and the sciences, he continued to do the same in Italy. There, he established a picture gallery, a school and a home for orphans and the elderly. The grateful Florentines built a monument to Demidov after his death in 1828.

In 1824, the Moscow Post Office, also located on Myasnitskaya but within the Boulevard Ring, was undergoing a period of expansion and development. The owners of nearby houses sent it a number of offers to sell their properties. These included P. I. Yushkov’s house (no. 21), several houses on Chistoprudny Boulevard, and the property of the then still hale and hearty Nikolai Nikitich Demidov. The Post Office was indeed in acute need of additional space to house its workers and officials. Demidov’s Court, as it came to be known, was considered the most fitting for these needs, and was purchased in April 1828 (very shortly before the owner’s death). 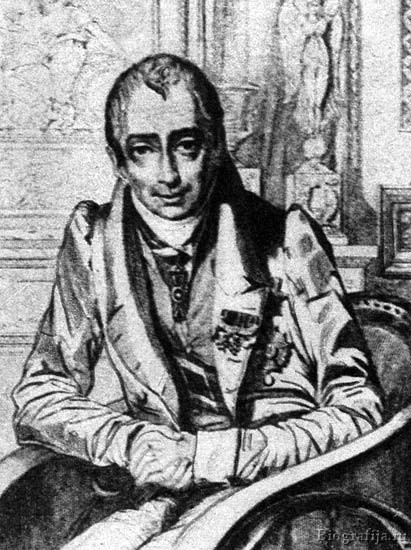 From then until the end of the 19th century, and for part of the 20th, the whole of Demidov’s Court belonged to the Post Office. It was used to house staff, and also contained numerous stables and utility buildings, and certain departments of the Post Office.

The living quarters were in sub-building 2, and stables were in 5, while the others contained storerooms. The Moscow Post Office’s main building was no. 40, sub-building 1.

The new owners were forced to undertake major restructuring and reconstruction of the existing buildings. In the 1850s, they invited the Petersburg architect Albert Katerinovich Kavos to build the new Moscow Post Office at Myasnitskaya, no. 26. After successfully overseeing the main construction, in 1854 he also rebuilt the main building (sub-building 1) of Demidov’s Court. It remains in that form to this day.

The building’s rectangular facade stretches out along the street. Its fairly large windows, a little smaller on the third floor, are framed with simple mouldings. The second-floor windows with slightly protruding cornices have survived only on the building’s sides, as has the bossage. The casual decoration of the front is interrupted only by a short central attic. Entry is via the yard. The interior decorations and original layout have been lost, but the arch coverings of two fairly narrow staircases in the building’s flanks give us some idea of the original architectural style.

By the 1870s, the buildings of Demidov’s Court were in very poor condition. As 1872 was set to feature a grand event – a visit from the royal family – the governor-general of demanded that the Post Office director take steps immediately to secure the noble guests’ safety. This was promptly done, and the Old Post Office (as Demidov’s Court came to be known) had its buildings reinforced with log supports.

The life and conditions of 19th century postal staff were arduous. In 1828, pay was so low that workers and officials were unable to support themselves. According to one document from that year: «…The postal service, especially in some locations, may well be the most dire of all civil employment, for the work of its officials has no set times, but depends on the movement of the post, which comes at all times, even early in the morning and on holidays; yet procrastination in the work of the postal service is intolerable, for the least delay brings public complaint and reprimand from above.».

Virtually the entire upper ranks of the Post Office were former military men, and life in a postal institution resembled life in the army. Postmen’s uniforms in the 1830s were like those of soldiers and army officers: a dark green jacket with a black velvet collar and cuffs, a white camisole, a rapier and a tricorn hat with a silver tassel and a gold collar patch. Postal workers took an oath that they did not belong to Masonic lodges or other secret organisations, and that they would not participate in strikes. Up until the start of World War I, women were not allowed to work for the Moscow Post Office.

Even towards the end of the 19th century, a post office worker’s day was 14-18 hours long. There were no holidays, since those were times when the flow of correspondence increased, and staff were not permitted to leave work until they’d processed all incoming mail. Breaks for breakfast or lunch were non-existent.

The delivery of parcels and letters from the Post Office headquarters to other offices and train stations, and vice versa, was particularly demanding. Transfer between train stations was carried out using special wagons of the city’s horse-drawn railway by Post Office horses. This was also the means used to deliver parcels and letters to local post offices. Thus, in 1909 the former Demidov’s Court housed 134 horses for this purpose, of which 32 were dedicated to parcels and the rest to letters. The horses were rented from their owners on a contract basis, and maintained by 138 people – grooms, drivers and couriers who typically lived on-site by the stables.

The postal authorities began to use trams to carry post as early as 1909. By 1911, tram routes fully connected with the populated areas immediately outside the city. From 1913, cargo trams became the only means of transporting heavy postal cargo between the Post Office and the six train stations.

From 1910, the Post Office made active use of automobiles. Contracts with private entrepreneurs provided 25 vehicles. However, the remaining 70 horses, still stabled in Demidov’s Court, continued to be used for home deliveries of parcels, transporting money and official journeys. The same sub-building, 5, became the Post Service’s garage.

Another of the buildings of the old Demidov’s Court, one which has belonged to the HSE since 2013, is 2a. It is a large underground garage built in the 1930s.

There’s an urban legend among local residents that this garage was built to serve the personal needs of Lavrentii Beria, Stalin’s ‘associate in bloodshed’ who was in many ways responsible for the repressions of that period. However, it is more likely to have been used by the Post Office, since from the mid-19th to the mid-20th century this territory was used for its housing and, more importantly, transport services. The modern parking area is located directly next to the old stables. The garage takes up the entire yard, with its roof rising several metres above the ground, and is decorated by a mostly excellently-preserved fence of brick pillars and wrought-iron lattices. These buildings are not presently in use.

In 1905, before the garage was built the yard was the site of a rally by Post Office and telegraph workers, at which they discussed their economic demands towards those in charge of the postal service. As elsewhere in the country, the revolutionary mood gave rise to a strike. On the 11th of October (by the old calendar), there were clashes between protesters and the police. Many were injured. The event is recorded on a memorial plaque on the Myasnitskaya Street side of no. 40, sub-building 1: “Site of mass gatherings of postal and telegraph workers in November 1905”.

The next burst of activity in Demidov’s Court took place in 1916, when it saw many rallies and demonstrations by postal workers, students and other worker, with slogans of “Glory to the Revolution!” The demonstrations turned into military conflict in the autumn of 1917, when the whole of Myasnitskaya Street became a battlefield. For several days, from the 26th of October to the 2nd of November, Moscow had no telephone or postal services. 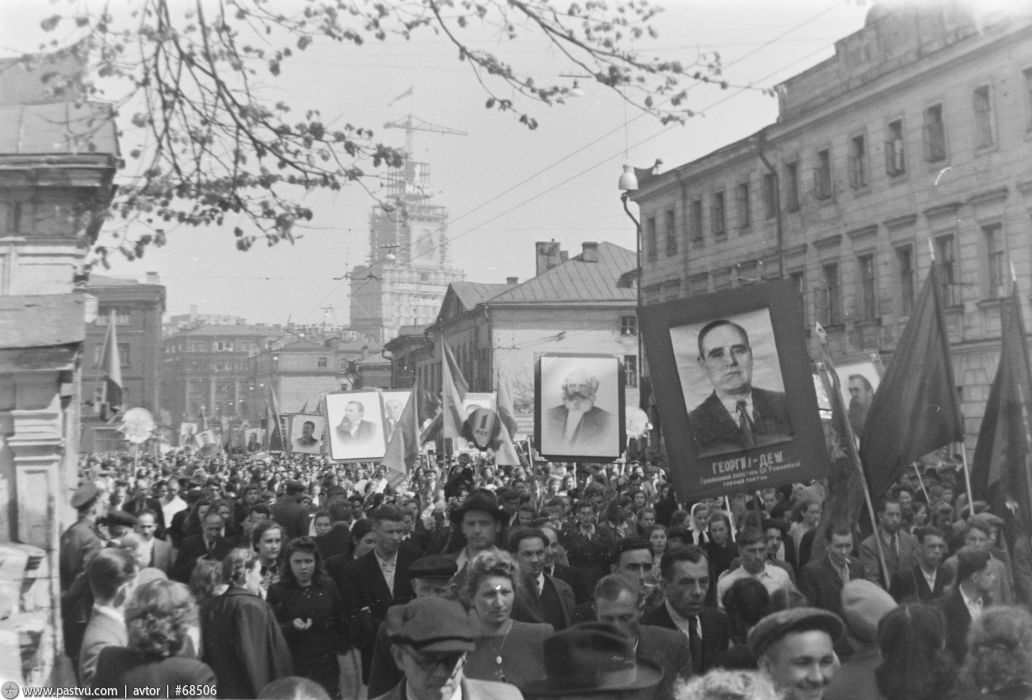 A May 1st demonstration on Myasnitsakya Ulitsa, near No. 40 (on the right)
Photograph taken in 1952. Source: Oldmos.ru

During the Soviet years, the Myasnitskaya building also served as a background to many demonstrations, but these were now celebratory.

With the return of peace, no. 40, sub-building 1 continued to be used for housing, with 14 flats in use by Post Office employees. In 1948, a new house (no. 40a) was built facing the street next to it, designed by A. T. Kapustin as housing for staff of the Central Aerohydrodynamics Institute. The two houses were connected by an archway leading to the inner yard.

Postal workers continued to live in the former Demidov’s Court until 1968, when the housing was replaced by offices. At present, the space is being rented out, including to faculties of the Higher School of Economics.