Call for applications: Summer School in Potsdam and Pskov

International Laboratory “Russia’s Regions in Historical Perspective” proposes to apply for the Interdisciplinary Summer School "Russia's Northwest: Local and Regional Aspects in the Cultural Memory of a Border Region" which will take place in summer 2021 in Potsdam and Pskov. 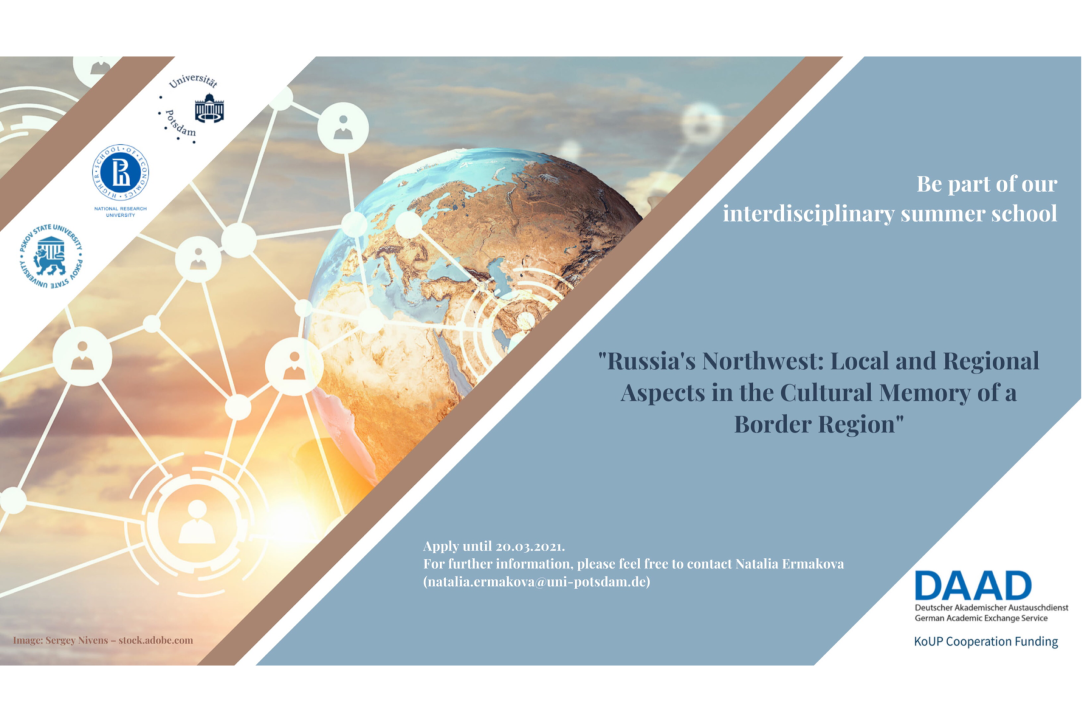 Around 30 years ago, the fall of the Iron Curtain opened the borders between West and East and created an important precondition for the intensification of international cooperations and entanglements in the economic, political, social and cultural life. The wide public became aware for the concept of globalisation and therefore hopes for worldwide prosperity and political modernisation in the sense of open democratic societies have been raised. Since the financial crisis, there have been increasing signs that economic globalisation is faltering. On the political level, there has been a conservative turnaround and a return to the concept of a strong nation-state in several countries of Eastern Europe and especially in Russia. Historical narratives, such as Russia's self-image as a fortress besieged by the West, not only have a strong identity-building effect, but also have a direct influence on the policy-making process.

Given the fact of this conservative reorientation and the resulting need for societies and the international (academic) community to deal with this complex processes, the Institute of Slavic Studies at the University of Potsdam, together with the Higher School of Economics (Moscow) and the Pskov State University, is organising the Interdisciplinary Summer School "Russia's Northwest: Local and Regional Aspects in the Cultural Memory of a Border Region". The Summer School aims to establish conceptual links between the disciplines of Border Studies and Memory Studies in order to explore the questions of how a society's memory culture influences its perception of borders and in which ways memory culture is instrumentalised for the construction of the current political-social agenda.

Pskov as a border town was chosen as a case study because of its historical interest due to its status as a border fortress and as a capital of an independent medieval republic, and from today's perspective because of its proximity to the supposedly enemy West. The interdisciplinary orientation of the Summer School makes it possible to consider the complexity of borders, which are understood as an expression of cultural, social, political and economic processes and not exclusively as a geopolitical phenomenon.

The Summer School is divided into two phases, which are accompanied by an online tutorial. The aim of the first phase (5.07. – 11.07.2021 in Potsdam) is to prepare the participants of the Summer School for their research projects, which they will carry out during the second phase (21.08. – 31.08.2021 in Pskov). For the project work, the participants form teams on the following main topics:

The work on the research projects begins in April (week 14) and is supervised by experts with an online tutorial.

In the first attendance phase, which takes place in July (week 27) in Potsdam, experts from the University of Potsdam, the HSE Moscow, the Pskov State University, the Leibniz Centre for Contemporary History Potsdam and the Marc Bloch Centre of the HU Berlin will provide participants of the Summer School with a comprehensive insight through lectures and accompanying seminars into the specifics of the perception of external and internal borders in Tsarist, Soviet, post-Soviet and modern Russia as well as their significance for the lives and works of important Russian writers, thinkers and artists.

In August 2021 (week 33 and 34), the project groups will travel to Pskov to collect empirical data and finalise their projects. For this second phase of the Summer School, representatives of the Pskov State University have put together an extensive professional and cultural program, as well as an additional pool of experts to supervise the students research projects. The results of the project work will be presented in Pskov and published in a popular science blog.

You can apply for participation in the Summer School until 20.03.2021, taking into account the following formal criteria:

In addition, applicants should explain their individual motivation by answering the following questions on max. one page:

Send your application documents until 20 March 2021 as a PDF document by e-mail to Natalia Ermakova (natalia.ermakova@uni-potsdam.de)

You will be informed about the result of the selection process by 30 March 2021 at the latest. For further information, please feel free to contact Natalia Ermakova.