Reference is a logical relation between an entity of a reality and its representation in a language. The way we call somebody or something directly depends on the sources that are provided by a particular language. In order to avoid lexical repetitions, we might also use pronouns, which in turn pose an issue of referential ambiguity. This is demonstrated in the example of the linguist Otto Jespersen: “If the baby does not thrive on raw milk, boil it.” The pronoun it can technically refer to both baby and milk, but we still are able to resolve this referential conflict based on the semantics.

In Spanish as a pro-drop language, pronominal referential conflict implies another issue, namely the use of null and overt pronouns, which are believed to be treated equally in the language, but it still debatable what the mechanism behind the usage and perception of them is.

Hence, this research project launched in 2018 is aimed at investigation of the difference in comprehension of pronoun types in Spanish and comparison of the comprehension strategies between a group of Spanish native speakers and a group of advanced Spanish learners who are native to Russian. 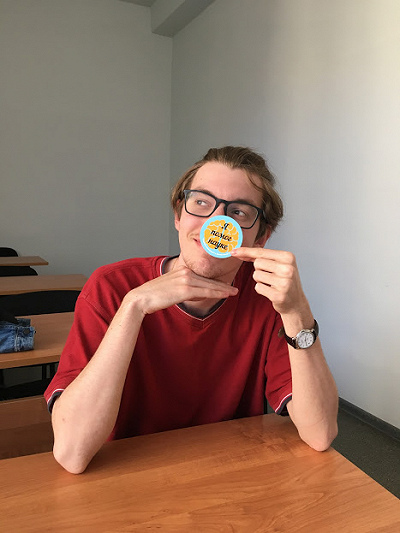 Andrey Kravtsov, one of the first participants right after the completion of the experiment (picture used with his permission)

Further, we plan to apply a different experimental method, namely eye tracking which would provide us with the more diverse data.

Currently, the recruitment of participants in the self-paced reading experiment is still available, which is why you are welcome to take part in it if you fulfill the following criteria:

The experiment consists of two parts: a questionnaire about the languages you speak + the experiment. Your task is to read sentences from screen and to answer comprehension questions (the detailed instructions are incorporated in the experiment). The procedure would take you approximately 30 minutes.

The results of a pilot study were presented at The sixth Summer Neurolinguistics School 2019 at the HSE Moscow and at The Fifth St. Petersburg Winter Workshop on Experimental Studies of Speech and Language “Night Whites 2019”. The abstract of the poster presented at the workshop is published in the book of abstracts:

Zdorova N., Khudyakova M. 2019. Anaphora resolution of null and overt pronouns in adult Spanish learners. Book of Abstract from The Fifth St. Petersburg Winter Workshop on Experimental Studies of Speech and Language. p. 95. 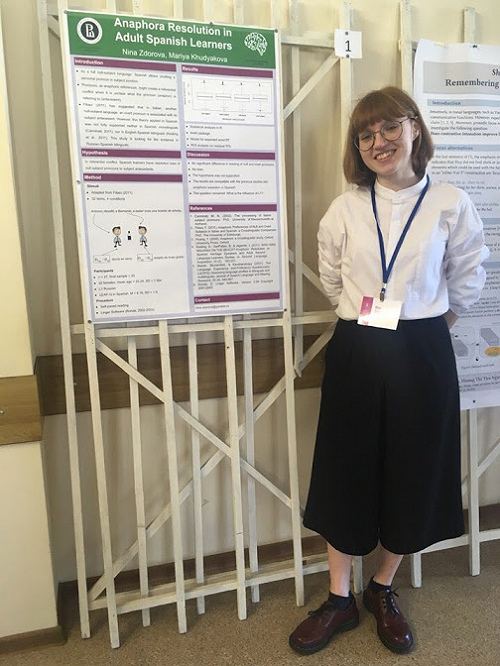